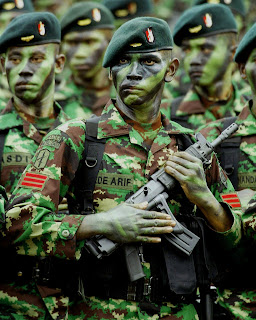 In April last year, the Defense Ministry received a letter from two civil society groups. The groups, a defense think tank and human rights watchdog, wanted to know how the government had fared in its bid to dismantle the military’s once-extensive network of businesses, as it was required to do by law.

But when the ministry replied about seven months later, many questions remained unanswered.

“They sent us limited information,” said Mufti Makaarim, head of the think tank, the Institute for Defense, Security and Peace Studies.

His co-requester, Al Araf, the program director of the Indonesian Human Rights Monitor (Imparsial), was also disappointed. “They only told us the military businesses had already been taken over [by the state],” he said last month. “They didn’t explain ... about the status of the businesses now, whether they became state companies or private companies.”

In 2004, the government began a process to divest the military of its business interests, either liquidating its companies or turning them over to the state. The process, part of reforms after the fall of former President Suharto’s military dictatorship, was intended to bolster civilian control over the Indonesian Military (TNI), which has a long history of rights abuses and corruption.

“If the military as an institution can generate money on its own outside of the government approval process, they feel like they don’t have to answer to civilian authorities,” said Lisa Misol, a researcher at Human Rights Watch who has extensively researched TNI businesses. “So if civilian authorities have allegations of serious human rights crimes, the military is in a more powerful position to resist.”

The Defense Ministry, which was in charge of dismantling the businesses, said it finished in 2010. But Mufti and Al Araf’s experience highlights a problem: In a process to bolster civilian control, civil society is struggling to check the results.

“We think the process of [reforming] military businesses is not transparent,” Al Araf said. “It’s very, very closed, and in that condition we think there is a tendency for the abuse of power or corruption.”

Eris said the ministry had no information since the companies were either liquidated or taken by the state and then transferred to the State Enterprises Ministry.

“Everything has been settled, but I don’t recall exactly what the situation was like,” Eris said. “I cannot talk case by case.”

The Freedom of Information Law says the public has a right to information about state-owned businesses, including audited financial reports.

The military no longer owns businesses directly, Eris said, meaning no companies are legally registered to the service branches.

“The bottom line with ‘military businesses’ is that there aren’t any more [of them],” he said.

But the military makes money in other ways; it leases land to private companies, charges companies for security and holds stakes in companies indirectly through foundations and cooperatives.

“If the people who profit are military officials, it should still be called military business,” said Haris Azhar from the Commission for Missing Persons and Victims of Violence (Kontras).

This involvement in business goes back to the Indonesian war for independence in the 1940s, when the new military had to generate its own funds. After the war, the government’s military budget was small and soldiers supplemented their incomes with a range of outside ventures, including illegal levies and smuggling.

Military leaders also acquired stakes in companies and made deals with businessmen, sometimes to raise money for military expenditures.

The military took over Dutch companies under martial law in the 1950s, and senior military officials later took command of newly nationalized companies, including oil giant Permina, which eventually became Pertamina. Under Suharto, a former general, their business empire flourished as they partnered with the private sector, benefiting from favored access to government contracts and gained land rights.

For years, business activities made up 60 to 70 percent of TNI funds, according to Jaleswari Pramodhawardani, a military analyst from the Indonesian Institute of Sciences (LIPI) who investigated the businesses after Suharto’s downfall.

In 2004, the government passed a law banning professional soldiers from involvement in business ventures, which it feared would compromise their professionalism and distract them from defense duties.

The law gave the government five years to “take over all business activities that are owned and managed by the military, directly and indirectly,” including those owned through military cooperatives and foundations. It required a forthcoming presidential decree to create operational guidelines for the reform, but President Susilo Bambang Yudhoyono, a retired Army general himself, failed to issue the decree after taking office that year.

The military began liquidating its business holdings without adequate oversight, Misol found during her research. For example, rather than giving its assets to the state, an army foundation independently sold its stake in Bank Artha Graha for Rp 121 billion ($13.1 million) in 2005. Mandala Airlines was sold for Rp 300 billion the next year by a foundation for the Kostrad Army Strategic Reserves Command.

Some suspected the military tried to drain its companies of value before the government takeovers, turning over assets to private allies to achieve a lower profile while keeping control.

“The government’s slow performance in fulfilling the mandate of the [2004] law made it possible for military businesses to have their statuses changed or commercialized,” Usman Hamid of Kontras said.

In 2006, Jaleswari estimated that net income from the TNI’s off-budget activities that was available “for operational purposes” was only about 1.5 to 3 percent of the government’s defense budget.

Five days before the deadline in 2009, Yudhoyono signed the decree. It should have clarified things, but it contained a contradiction that made the reform murkier.

The confusion concerned the status of businesses owned “indirectly” by military cooperatives and foundations. Unlike the 2004 law, one article in the decree exempted them from takeover, saying only directly owned businesses would be affected. But another article required the takeover of “all business activities owned and managed by the military, directly or indirectly.”

Nine days later, the Defense Ministry issued another decree that formed a new team to oversee the business transfers. It said cooperatives and foundations could own shares in businesses but may need to be restructured to comply with existing laws limiting their activities to an extent.

The differing mandates presented a challenge for the ministry’s team. “What kind of ‘activities’ does the law mean?” said team spokesman Silmy Karim, a businessman with close ties to the defense industry. Still, he added: “Military business is over. The regulations are complete.”

Rather than eliminating all the businesses, however, Misol said the decrees created a framework to strengthen those owned by foundations and cooperatives. “The Indonesian government has defined the problem as narrowly as it can in order to claim some success,” she said.

Erry Riyana Hardjapamengkas, a former Corruption Eradication Commission (KPK) deputy chairman who led another team that investigated the businesses in 2008, before the decrees, was also disappointed: “They were not brave enough to make a firm decision [on the transfer].”

In their information request, Imparsial and IDSPS asked for government activity reports and data from the investigation and takeover of military businesses.

The ministry sent them results of investigations from 2005 and 2008, consisting of aggregate data and not the detailed status of individual companies. It did not include information about businesses that were once owned directly by the military. This information has never been made public.

Mufti admitted that filing a written request had disadvantages. “We cannot chime in if the answers are not what we’re looking for,” he said.

Still, the Defense Ministry’s Eris insisted transparency was not an issue.

“I think we are one of the most transparent in the world about defense,” he said. “You can ask us, we have the public communications center that can explain everything. We answer all the questions.”

This is the first of a three-part series on military-owned businesses. Samantha Michaels & Ulma Haryanto Jakarta Globe

Tomorrow: Is there enough oversight of military cooperatives and foundations and their businesses?
Posted by Kerry B. Collison at 4:48 PM