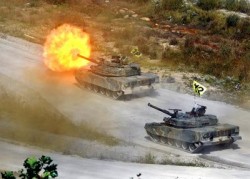 For nearly six decades, South Korea’s approach to security has focused on sustaining the status quo: maintaining deterrence and a robust defence posture in order to prevent another major conflict on the Korean Peninsula.

Three mutually reinforcing strategic pillars — defensive deterrence, alliance with the US and forward active defence — have long defined South Korea’s conception of national security, its force structure and the operational conduct of its armed forces.

In light of these changes, South Korea’s defence planners have been searching for a new strategic paradigm, which would allow greater flexibility, adaptability and autonomy under conditions of strategic uncertainty. Simultaneously, South Korea is modernising its armed forces in order to respond to the widening spectrum of threats, mitigate technological and interoperability gaps with US forces and eventually attain a self-reliant defence posture.
Indeed, for over a decade now, South Korea has planned to transform its military into a smaller, but increasingly networked, balanced and digitised standing force with independent surveillance and reconnaissance platforms, real-time integrated C4I (command, control, communications, computers and intelligence) systems, and long-range precision strike capabilities. At the core of South Korea’s defence transformation has been the ‘Defense Reform Plan 2020’ (DRP 2020), first introduced in 2005, and subsequently revised in 2008, 2009 and 2010.

Under the DRP 2020, South Korea’s armed forces would significantly enhance their military capabilities. About one-third to one-half of existing, but largely outdated, major weapon systems would be replaced with next-generation technology. In order to accelerate force development, South Korea’s defence budget was projected to increase by 11.1 per cent annually through 2015, and 7.1 per cent through 2020, totalling about 621 trillion won (US$431 billion at 2008 rates) between 2006 and 2020.

With its ambitious scope and proposed timeline — and escalating costs — it has become increasingly clear that the military budget will not reach the targets prescribed in the DRP 2020. The follow-on debates have also led to more adjustments, revisions and delays in its implementation. In 2010, however, two crises further reshaped the direction of the DRP 2020 and much of South Korea’s defence planning: the sinking of the South Korean corvette Cheonan in the Yellow Sea and North Korea’s artillery attack on South Korea’s Yeonpyeong Island. Shortfalls in responding to these attacks eventually prompted South Korea to ask the US to postpone the planned transfer of war-time operational control to Seoul until 2015.

First, inter-Korean relations over the past decade have polarised South Korea’s political arena, with persisting debates on the magnitude and character of North Korean threats, the terms and conditions of potential Korean unification, changes in US strategy and security commitment to South Korea, and concomitant long-term strategic requirements and defence-resource allocation. This political fragmentation has led to an erosion of strategic consensus, which has resulted in disagreement over South Korea’s defence requirements.

In this context, the political will to allocate the required resources has been constrained by economic pressures and the imperative to sustain South Korea’s socio-economic stability and growth. South Korea has struggled to find sufficient finances to fund its military modernisation plans, which has resulted in delays in procuring various technologies.

Second, the ROK military has been constrained by its own institutional rigidity, intellectual conservatism and path dependence. This has resulted in inter-service rivalries for influence and resources. Indeed, the composition, force structure and deployment of the ROK military have each remained relatively unchanged, dominated as they are by conventional ground forces.

Third, ROK forces continue to face a range of technical and inter-operability problems in conducting full-spectrum joint military operations with their US counterparts. These challenges can be attributed to inter-service divides, technological and operational deficiencies, and, arguably, a lack of combat experience.

In order to implement its defence reforms, South Korea must show greater adaptability in its defence planning. But this is unlikely until a political consensus is forged to move away from the traditional security doctrine. East Asia Forum