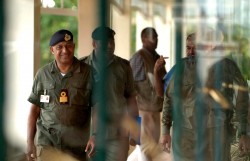 Japan’s decision not to invite Fiji’s prime minister, Voreqe Bainimarama, to the sixth Japan–Pacific Islands Leaders Meeting (PALM 6), to be held in Okinawa this 25–26 May, represents a defining moment in its diplomatic relations with the Pacific Islands.

Japan announced that due to the perceived ‘insufficient pace of reform toward democratisation’, it would invite Fiji’s foreign minister instead (who subsequently gave his apologies). That this announcement came just one week ahead of the meeting is an indication of what a difficult decision this was for the Japanese government. In addition to the immediate consequences for Japan–Fiji relations, this decision has broader implications.

The PALM summits have been held every three years in Japan since 1997, and are Tokyo’s signature event in its foreign relations with the Pacific Islands. They normally bring together the heads of government from Japanese and Pacific Island countries, plus ministerial-level representation from Australia and New Zealand. Although in the past they have been dubbed the Japan–Pacific Islands Forum meeting, the PALM summit is not technically a Forum event. Fiji remains suspended from the Pacific Islands Forum pending its return to democratic rule, but it is not officially excluded from the PALM process.

In October 2010 Japan hosted the first Interim PALM meeting — a mid-term gathering of Pacific Islands Forum foreign ministers in Tokyo. This was ostensibly aimed at assessing the progress in the implementation of commitments made at the previous year’s PALM summit and looking ahead to the next one. Most significantly, however, it was a first step toward normalising ties with Bainimarama’s government, and was the occasion for the first meeting between Fiji’s foreign minister and his Japanese counterpart. During the 2010 Interim PALM meeting Tokyo indicated its concerns that the policy of isolating Fiji to pressure it into more meaningful democratic reforms was failing, and this was taken as a positive sign that Prime Minister Bainimarama would receive an invitation to PALM 6.

Since then, Japan has watched events unfold in Fiji and in the region, waiting for the right moment to issue the invitation. As the head of the Fiji Military Forces, Prime Minister Bainimarama has not been allowed to travel to Japan since he came to power in the December 2006 coup. He has, however, made numerous visits to China and to other Asian powerhouses such as Indonesia and India, and to new friends in the Middle East.

Japan had compelling reasons for inviting the Fijian prime minister to Okinawa this year. First, it has been six years since Fiji was last represented at PALM at a prime ministerial level. It missed out on PALM 5 in 2009 due to the political upheaval Fiji was undergoing at the time, including the abrogation of the constitution and subsequent uncertainty over the country’s democratic future. The 2012 PALM summit is the last one before elections in Fiji, which are scheduled for 2014. Inviting Fiji’s prime minister would have signalled Japan’s support for the political process mapped out by the Bainimarama government. Despite its perceived flaws, this political process remains the only hope Fiji has of returning to some form of democratic rule.

PALM 6 also represented an opportunity for Japan both to rebuild bridges with this key actor in the region, and to acknowledge that the Pacific Islands is a region in transition. In the six years since he seized power, Prime Minister Bainimarama has redefined Fiji’s foreign policy, and these changes have led a growing number of Pacific Island countries to embrace new partnerships and alignments. A new diplomacy that is not contingent on the policy preferences of Australia, New Zealand or the US seems to be emerging across the region, indirectly prompted by Bainimarama.

If, as reported, Japan’s decision not to invite Prime Minister Bainimarama to PALM 6 was the result of international pressure, from Australia in particular, it signals a reaffirmation by Japan of the ‘old regional order’ and a rejection of the ‘new regional order’ that is gradually taking shape. As Japan’s prime minister welcomes Pacific leaders in Okinawa, including ministers from Australia and New Zealand, he may do well to reflect on the long-term significance of Fiji’s empty seat.

Sandra Tarte is Associate Professor and Director of the Politics and International Affairs Program at the University of the South Pacific in Suva, Fiji.