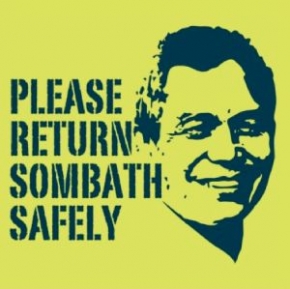 THE government of Laos had been exuding a bluff, self-congratulatory air towards the end of 2012—having won admission to the WTO in October and then playing host to the Asia-Europe summit in November—until suddenly a foul wind blew through, mid-December. The country’s most distinguished leader of an NGO was grabbed at a police checkpoint in the capital, Vientiane, and has not been seen since.

Sombath Somphone founded the Participatory Development Training Centre (PADETC) in 1996 with the aim of fostering sustainable, equitable and self-reliant development in Laos. In 2005 Mr Sombath won the prestigious Magsaysay award, often regarded as Asia’s answer to the Nobel prize. Today, nearly three weeks since his extraordinary kidnapping, he is nowhere to be seen.
His disappearance has triggered an unprecedented flood of international dismay. Foreign NGOs, Asian parliamentarians and Western governments have raised their concerns with the Lao authorities. “Missing” posters have popped up in Vientiane, appealing for word of his whereabouts. Farther-reaching campaigns to draw attention to this case have been circulating on Facebook, Twitter and Avaaz. The UN Human Rights Council in Geneva has also expressed deep worry over his disappearance.

Eight days before Mr Sombath’s abduction the government of Laos deported Anne-Sophie Grindoz, the director of Helvetas, a Swiss NGO. Her offence was in writing a personal appeal addressed to development partners and donors, which then became public:

We are working in a challenging environment: This is a country governed by a single-party regime, where there is little space for meaningful democratic debate.

Indeed there is far less “space” in tiny Laos than in its fellow-travelling Communist neighbours, China and Vietnam. Ms Grindoz went on to complain that elements of civil society in the capital, Lao and international alike, are so cowed by the restrictions they face as to be, in effect, stifled by a system of self-censorship.

Several other NGO workers have fled in fear for their own safety during the past two weeks. A chill has gripped the wider aid community in Vientiane; a foreign resident calls it a wave of fear. Government officials have offered only a deadpan reply: foreigners must abide by the rules and the country’s constitution.

And for Lao nationals? The police have confined their inquiries into Mr Sombath’s abduction to the possibility of his having untoward “business conflicts” or personal enemies. His colleagues insist however that Mr Sombath, a popular and notably non-confrontational professional, had no known enemies and no business interests external to his work as a development specialist.

Then there is the CCTV footage. A camera captured images that seem to show traffic police stopping Mr Sombath at a checkpoint. Another man arrives on motorbike and is next seen driving away in Mr Sombath’s car. Minutes Mr Sombath is whisked away by plainclothesmen, who drive him off in a white jeep with lights flashing.

On January 3rd the Lao ambassador to the UN in Geneva sent a letter that was supposed to clarify the case of Mr Sombath, in response to official queries raised at the UN. His statement accepts that Mr Sombath was probably kidnapped, but then it has nothing to say about the odd behaviour of the two traffic policemen. Surely they must have witnessed the incident, so close to their checkpoint as to be captured by their CCTV camera?

The traffic policemen, after ostensibly stopping Mr Sombath to inspect his driving documents, demonstrated no apparent concern about the strange person who arrived at the scene by motorbike then drove off with the NGO leader’s car. Certainly they made no attempt to stop him. The ambassador’s letter leaves us to wonder. Have these two policemen—key witnesses, if there are to be any—even been interviewed? So far the authorities have failed to report anything that could indicate that a serious police investigation is under way.

In 1996, as the director of PADETC, Mr Sombath started a programme that trained young volunteers to run a series of community-based services: improving water and sanitation; setting up small rice mills; and establishing small banks to finance farming and livestock operations.

Prior to PADETC, the work Mr Sombath did as a consultant for UNICEF in Cambodia in 1985 earned him a remarkable degree of admiration and respect. The Cambodian government sent an official letter of thanks to the government of Laos, for having lent the talents of “such a competent expert” to their country.

Many of the NGO workers in Vientiane discern a connection between the abduction of Mr Sombath, the expulsion of the Ms Grindoz, and their involvement in the Asia-Europe People's Forum of NGOs (AEPF), which was held in Vientiane in October, just before the Asia-Europe summit. In preparation for the AEPF, Mr Sombath led a ground-breaking survey of all of Laos’ 16 provinces, with support from the UN Development Programme (UNDP) and co-operation from provincial and village authorities.

Mr Sombath, along with Minh Pham, the UNDP’s resident co-ordinator, described the principles of the survey in an op-ed they published in the Vientiane Times in October, titled “Listening to the People’s Voice”.

These grassroots consultations did not measure income or material poverty. Instead, they adopted an innovative approach focused on clear concepts that are easily understandable by all:
“happiness” (khouam souk in Lao) and “suffering” (khouam thuk). This first-of-its-kind exercise produced very interesting results.

Across all 16 provinces, highly diverse groups were asked to identify issues that affect their own personal “happiness” or “well-being” as well as their “suffering” or “poverty.” These included not only ordinary villagers and workers, women’s representatives, and local government officials, but also business owners, monks, people with disabilities, HIV-positive people, and young people.
It concluded that the Lao people want good governance and more consultation about development projects.

The people have spoken. We encourage the Government to make a substantive response, so that this becomes a true national dialogue on common development concerns and interests as Lao PDR moves forward

(From the Vientiane Times, October 8th 2012. A mirrored copy can be found here.)
It seems that this angered someone at the top. As far as “substantive responses” go, within 24 hours of this piece’s publication, Mr Minh, Mr Sombath’s counterpart from the UNDP side, had been pressured to disown his role in the story.

Some hardliners in the Lao politburo are not at all enthusiastic about pursuing a path of development based on GNH—“Gross National Happiness”, a yardstick championed by Bhutan and echoed in Mr Sombath’s proposal.

Many NGOs, PADETC for instance, are at odds with the regime’s big dam projects, large foreign-owned plantations that tend to marginalise small farmers. Several Lao NGOs, again including PADETC, were supporters of the Mekong region’s “Save the Mekong” campaign, and critical of the Xayaburi dam project.

Lao citizens with unpopular views have a way of vanishing. In 2007, Sompawn Khantisouk, the owner and manager of an eco-tourism lodge—and a vocal critic of the proliferation of those Chinese-owned plantations that expand by expropriating land from smallholders—disappeared. He has never been seen since.

Mr Sombath, as the national organiser of the AEPF, had identified himself with a civil-society forum that clearly drew mixed reactions from the regime.

On the one hand Thongluon Sisoulith, the foreign minister and deputy prime minister, welcomed the participants warmly and seemed to take a positive view of their in development activities. But then, according to several international NGO workers present, during the forum plainclothes agents could be seen copying notes, filming the forum’s local participants and creating an intimidating atmosphere. Several Lao speakers were so alarmed as to withdraw from the event.

The mixed reception for the AEPF may reflect a conflict inside the government. While the younger generation and better-educated bureaucrats have come to accept a role for NGOs, the old guard—the men who fought the “secret war” of the 1960s, waiting out the American bombing campaign from the caves of Sam Neua—see the same NGOs as a threat to their position as an invincible ruling elite.

Mr Sombath is neither a political dissident nor has he publicly attacked the system of one-party rule. Paval Chachavalpongpun, an associate professor at the South-East Asian Studies centre at Kyoto University, thinks that Mr Sombath’s kidnapping has ensured that “the spotlight will be on this landlocked country. [Whether it releases] him or not, the reputation of Laos has already been damaged.”

Even this much seems hopeful. So much for a happy new year in Laos, where neither political liberalisation nor the urgently needed debate about development look likely. Banyan for The Economist