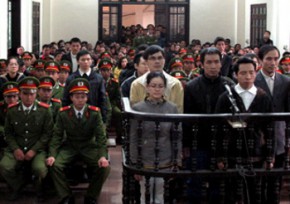 A disheartening step backwards from joining the fraternity of modern nations

When interviewed in 2010, Le Quoc Quan was matter-of-fact about the chances that he would again be arrested by the Vietnamese police.

"I'm not afraid," he said, when I asked if he thought his work with some of the more outspoken critics of Vietnam's one-party regime might land him in jail again. He was jailed for three months in 2007 after returning to Vietnam from the United States.

Le Quoc Quan is himself one of the more vocal critics of the government in Vietnam, where advocating any alternative to one-party Communist Party rule is outlawed. It came as little surprise, then, when the Hanoi-based lawyer was arrested on Dec. 27 on tax-related charges.

His arrest came just before a trial in central Vietnam of 13 activists arrested in 2011. Wednesday's verdict sentenced the group—12 of whom are Catholics, as is Le Quoc Quan—to between three and 13 years in jail.

The men and women were convicted of "carrying out activities aimed at overthrowing the people's administration" under Article 79 of Vietnam's penal code. In 2012, around a dozen activists and writers were jailed in Vietnam on similar charges.

The 13 jailed yesterday were accused of ties with Viet Tan, an overseas Vietnamese group that lobbies for political change in Vietnam but one that the Vietnamese government labels a terrorist organization—charges that the United States says are without any evidence.

A US embassy statement reacting to yesterday's verdict read that "the government's treatment of these individuals appears to be inconsistent with Vietnam's obligations under the International Covenant on Civil and Political Rights, as well as the provisions of the Universal Declaration of Human Rights relating to freedom of expression and due process."

The Committee to Protect Journalists also protested the sentences, saying they "demonstrate the outrageous lengths that Vietnamese authorities are willing to go to suppress independent reporting," according to Shawn Crispin, CPJ's Southeast Asia representative. "We call on the authorities to reverse these convictions and release all journalists currently held behind bars on spurious national security-related charges."

Bloggers Paulus Le Van Son, Ho Duc Hoa, Dang Xuan Dieu, Nong Hung Anh, and Nguyen Van Duyet were among those convicted, according to a statement released by Viet Tan. The bloggers had been arrested in 2011 and held in pre-trial detention on unspecified charges related to Article 79 of the penal code, which outlines penalties for activities aimed at toppling the government. The bloggers were regular contributors to Vietnam Redemptorist News, an online publication that covers the plight of the country's persecuted Catholic minority, land disputes between the government and grassroots communities, and other social issues.

According to Viet Tan's account of the trial, "authorities mobilized hundreds of uniformed and plainclothes security police to block supporters and relatives of the defendants from gathering outside the court. Dozens of supporters—including elderly women and Catholic clergy—were physically attacked by police and temporarily detained."

One of the 13 jailed yesterday, Nguyen Van Duyet, a workers' rights activist, said in his final testimony that "Only Jesus Christ is our hope, love, and truth. I wish to send peace to everyone!"

What the verdict means for the relationship between Vietnam and the Catholic Church is not clear. Vietnam has Southeast Asia's largest Catholic population after the Philippines, with an estimated 8-10 million believers.

The Communist rulers of Vietnam have long regarded local Catholics, especially those from the south of Vietnam, as pro-American collaborators during the Vietnam War. Relations between the government and the Holy See have improved in recent years, however, and to some, senior church figures inside and outside Vietnam have prioritized improving relations with the Vietnam government over sticking-up for those Catholics who are jailed for political activism.

According to one of a series of leaked 2009 US embassy cables from Hanoi detailing meetings between American diplomats and Vietnamese officials and churchmen, American officials viewed local Catholics as being "thrown under the popemobile," while the Holy See tried to establish better relations with Vietnam, which—albeit to a lesser extent than China—tries to control senior Vietnamese church appointments.

Catholics are among the officially tolerated religious groups in Vietnam, and are mostly left alone if they do not publicly criticize the workings of government.

Members of non-sanctioned groups are treated even more harshly, it seems. As in Burma under the military junta, Vietnam uses house arrest to curb the activities of high-profile dissidents. I met Thich Quanh Do, patriarch of the banned Unified Buddhist Church of Vietnam, at his Ho Chi Minh monastery in 2011, a building said to be watched by undercover police leafing though newspapers and sipping coffee across the street.

Now 84, and under various forms of detention since 1975, he said at the time that Vietnam's rulers feared something like an Arab Spring emerging, with over 30 million people online amid a once-booming but now sputtering economy and lurid allegations of graft and mismanagement in state-owned enterprises.

Another focus of government ire is Dan Lam Bao, a blog that has earned itself criticism from government for its publishing of commentaries about alleged power-struggles inside the Communist Party.

In an email sent soon after the government described the blog as "a wicked plot of the hostile forces," a blog editor—requesting that his name not be used—explained to me that "our readership hungers for information about Communist Party leaders—their personal wealth or their abuse of power and corruption, or the infighting that occurs between party factions. Our blog covers all of these topics, and that's the ‘political reason' for the Vietnamese government to aggressively target our blog."

But official distaste for Dan Lam Bao took a more sinister turn just over a week ago. Writer Nguyen Hoang Vi, who posts on Dan Lam Bao, detailed how police officials beat and stripped her and ordered state nurses to conduct a vaginal cavity search while she was in custody on Dec. 28 in Ho Chi Minh City's Nguyen Cu Trinh Ward.

"I scratched their hands, pulled their hair, but the strength of one was no match for the four of them combined. In the end they stripped me naked," she later wrote on Dan Lam Bao.

Vi was detained in front of the courthouse where the same day an appeal was scheduled in the cases of imprisoned writers Nguyen Van Hai, Ta Phong Tan, and Phanh Thanh Hai. The three were charged in part for their founding of the unsanctioned Free Journalists Club of Vietnam, and were sentenced to harsh prison terms in September for conducting propaganda against the state, according to the Committee to Protect Journalists.

(Reprinted with permission from Irrawaddy, with which Asia Sentinel has a content-sharing agreement)