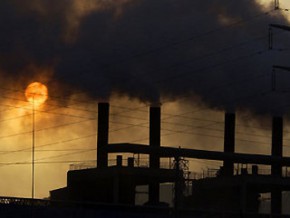 Despite having become the world's biggest emitter of greenhouse gases nearly two years ago, China is at least another 17 years away from peak emissions, according to a new report by the HSBC Climate Change Team, issued late last year.

"The 18th Party Congress highlighted trading of various environmental commodities – energy savings, carbon emission rights, pollution discharge rights and water rights – all of which will have a national cap, except carbon emissions," the report indicated. "Our analysis shows that China's emissions might not peak until 2030," but by that time annual emissions could amount to half of the of the world's carbon budget – what is allowed in order to stay within a target to keep the atmosphere from warming by 2 degrees Celsius.

Clearly, the team notes in a second report, titled "How to Avoid the Climate Cliff", and issued last October. The world cannot wait until 2020 for additional action to be taken; this would mean going over the climate cliff." The private sector must be mobilized, by getting a third of the world's top 1,000 companies to agree to a 10 percent cut in emissonsby2020. Fossil fuels must be phased out and action taken to cut other pollutants.

"None of these requires an international treaty and many have already started," the climate change team reports optimistically It is starting to appear, for instance, that carbon taxing, which has been discarded by conservative interests in the United States, is re-emerging as a viable tool for fiscal rebalancing, particularly in the US, the climate change team notes.

China has targeted getting 15 percent of primary energy from renewables by 2020 including starting construction of an additional 120 GW of hydroelectric power, 100 GW of wind capacity and 15 GW of solar capacity by 2015.

While the implications of a 2C climb in global mean temperatures are explosive, other organizations are concerned over the possibility of a 4C climb instead. As Asia Sentinel reported, on Nov. 19, a study by the world's biggest climate modeling system, led by Dan Rowlands of Oxford University for the Intergovernmental Panel on Climate Change forecasts that a two-degree Celsius increase in global temperatures by the turn of the century would have a catastrophic effect, with water stress in arid and semi-arid countries, more floods in low-lying coastal areas, coastal erosion in small island states, and the elimination of up to 30 percent of animal and plant species across the globe.

China's annual report on climate change policies, issued by Xie Zhenhua China's chief climate negotiator, suggested that China's emissions could peak when its GDP per capita was around half that of when developed countries' emissions peaked.

"We estimate this to be around US$20,000-25,000 per capita," according to the HSBC report, written by Wai-Shin Chan, Nick Robins, the head of the climate change center, and Zoe Knight, climate change strategist. As an indication of how far China has to go, its per capita GDP is only a quarter to a fifth of that at US$5,000.

China's possible emissions in 2030 could reach as high as 12 giga-tonnes, roughly 40 percent more than current levels, the report finds. That would amount to almost half the global emissions allowed under the International Energy Agency's World Energy Outlook 2012.

"Even if China could deliver larger reductions in carbon intensity, the country's absolute 2030 emissions could still be 10 gigatonnes, 40 percent of the WEO 450 scenario carbon budget," the HSBC report predicts.

Chinese greenhouse gas emissions increased by a third in just the four years from 2006 to 2010, with reliance on coal use rising from 68 to 70 percent of total energy production during the period. It is still considered a developing country under the Kyoto Protocol and does not have a carbon production ceiling.

The HSBC Climate team called 2015 a "pivotal year for the climate agenda," saying global greenhouse gases must peak by that year to hold global temperatures in the range of 2.0-2.4 degrees celcius. If not, the International Energy Agency has concluded that unless action is taken by 2017 the world could be locked into high carbon infrastructure.

"This is the climate cliff that needs to be avoided, the report notes. Four trends, however, suggest that the road to a low-carbon global economy could be achieved:
These trends don't guarantee success but suggest that if sustained, then a turning point in sentiment could be close. Political commitment, especially during the current economic downturn, appears uncertain at best. However, the climate team sees positive incremental moves to build carbon markets, with even the United States becoming involved (chart) as well as in Europe and Australia, which have linked their carbon markets. California has led the United States with passage of a carbon futures trading package last year.

"But without an ambitious global framework, these schemes will tread water, suffering from bloated ‘hot air' of excess permits chasing diminishing demand. We believe that there are four key steps to a credible 2CP, which need to be bolstered by climate finance and progress on the 2015 negotiations."

Those steps include finalizing the Kyoto2 protocol, within some kind of acceptable time frame, figuring out what to do with up to 13 billion tonnes of surplus allowances – three times the EU's annual emissions – and establishing a legal framework for operation, much as the General Agreement on Trade and Tariffs turned into the World Trade Organization. Asia Sentinel