In Disputes Over Asian Seas, Winner Is Likely to End Up Taking Not Much 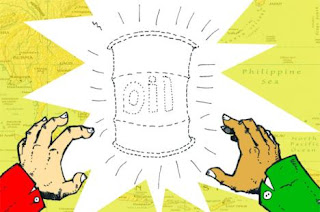 It may be Asia’s 21st century equivalent of the assassination of Austria’s Archduke Ferdinand that sparked World War I. Growing tensions over territorial disputes in the East and South China Seas threaten to disrupt the oft-heralded Asian Century. Whatever the outcome, many see more than just competing nationalisms, the scars of national memory and the rise of an increasingly assertive China behind clashing interests.

To many, this is about oil: a widely-shared perception that beneath these disputed waters lays a treasure trove of oil and gas able to satisfy energy needs of dynamic Asian economies.

Unfortunately, there is no basis for this conventional wisdom. The reality is that the winner of East or South China Sea disputes is unlikely to gain enough energy to make any significant difference to any of the claimants’ growing energy needs. This is particularly true in regard to China. And in any case, exploiting what resources exist will require legal and political certainty and stability.

Tensions over territorial issues have ebbed and flowed in recent years. There have been nearly two dozen military clashes in the South China Sea since 1974 when China seized the Paracel Islands from Vietnam, killing 18 Vietnamese troops in the process. Most of the action occurred in the 1990s, followed by relative calm until fairly recently. Although China has signed and ratified the Law of the Sea Treaty, or LOS, its recent assertiveness is based on claims contradicting it — “nine dotted lines,” encompassing more than 80 percent of the South China Sea, well beyond the 200-mile economic exclusion zone recognized by the treaty.

One new factor that may be raising the stakes is continued improvements in deep-sea drilling technology. Until the 1990s there was little drilling for offshore oil or gas deposits deeper than 304 meters. Over the past two decades, increasing amounts of oil worldwide have come from what is known as “ultra-deepwater” — depths of 1,500 meters or more. Until recently, the technology was limited to mainly major Western energy multinational firms. Then last May the Chinese National Offshore Oil Company said it had developed a deep-sea oil platform at a cost of roughly $1 billion capable of extracting oil at a depth of 12,000 meters.

To date, there has been no authoritative survey of oil and gas potential in either the East or South China Seas. Chinese estimates of oil and gas reserves in both disputed areas appear exaggerated compared with those of major multinational energy firms and other analysts. China estimates East China Sea reserves at 160 billion barrels of oil, nearly double that of US Energy Information Agency estimates.

As for South China Sea reserves — likely 70 percent gas, according to most experts — Chinese claims of oil appear wildly inflated. CNOOC estimates some 213 billion barrels of oil — almost the size of Saudi Arabia’s proven reserves. This is nearly 12 times larger than that estimated by the US Geological Service, and energy consultancy Wood-Mackenzie estimates a total of 2.5 billion barrels equivalent of proven oil and gas in the disputed South China Sea islets and shoals —nearly 100 times less than China claims!

With the possible exception of China and Chinese firms that have entered in joint ventures with foreign firms, East Asian states seeking to exploit the resources of claimed islets and atolls would need to partner with foreign investors. Indeed, several Asean claimants in the South China Sea have signed oil-exploration contracts with foreign firms. However, the political risk and legal uncertainty of the disputed territories make it problematic for large-scale investment.

This logic may have been behind the policy China pursued until recently, as suggested by the late leader Deng Xiaoping who proposed “put aside differences and jointly develop resources.” Given the opaque Chinese decision-making process, it’s tempting to speculate whether the combination of maritime military ambitions, mercantilist resources policies, inflated hopes of energy and new oil technology capabilities may account for the apparent abandoning of Deng’s policies.

Ironically, Deng may have had it right. It is difficult to see how to resolve the disputes: How do countries compromise on national honor and historic national memory? And it is equally difficult to imagine how to create legal and political certainty to reduce risk enough for global energy companies to commit what would be multibillion dollar investments. Most exploration contracts entered into by energy firms have been by small companies looking to get in on the ground floor. So joint development “without prejudice” on claims would seem to make a lot of sense.

There are ample precedents of joint development of resources. There is an agreement among claimants in the Arctic. In East Asia, Thailand and Malaysia have a joint oil-and-gas development accord and there is a similar treaty between Australia and East Timor. And not least, there is a joint-development arrangement reached in 2008 to exploit oil and gas between China and Japan in the area around the disputed uninhabited Diaoyu/Senkaku islets. Beijing and Tokyo agreed to explore jointly four gas fields in the East China Sea and halt development in other contested parts of the regions. Both sides agreed to conduct joint surveys, with equal investment in an area north of the Chunxiao/Shirakaba gas field and south of the Longjing/Asunaro gas field. However, China began to develop the Tianwaitian/Kashi gas field unilaterally, launching a protest from Japan in January 2009. That contentious action, followed by a 2010 clash between a Chinese fishing boat and the Japanese Coast Guard put the agreement on hold.

East Asia is rife with speculation about how the new governments that have assumed power in Tokyo, Seoul and Beijing will impact the territorial disputes. The sheer increase in maritime traffic in the to-and-fro of surveillance ships in the disputed waters and air patrol suggests 2013 could see at least a few naval skirmishes. In an optimistic sign, Japanese Prime Minister Shinzo Abe, an ardent nationalist, quickly dispatched a senior envoy to Seoul, with which Japan has been at loggerheads over territorial dispute to reassure the new government in Seoul led by Park Geun-hye and to mend fences.

Sino-Japanese relations have been particularly tense, with China sending daily maritime agency ships around the Senkakus and some Japanese threatening to send Air Defense Forces to fire warning shots. In his previous incarnation as prime minister in 2006, Abe made a special effort to ease Chinese concerns upon taking office. With a shaky Japanese economy as his priority and Upper House elections in July, many expect Abe to minimize confrontation — at least in the short run. But in the face of public outrage over China’s provocative tactics Abe and an avidly nationalist cabinet might stir things up.

At the end of the day, the web of overlapping territorial claims in Asia is unlikely to produce an energy bonanza for anyone. It’s a case of “winner take little.” Unless the region can find a way to resolve or at least manage the underlying nationalist passions that drive what are otherwise minor disputes over largely uninhabited islets and shoals, the oft-heralded Asian Century will be short-lived.

Robert A. Manning served as a member of the US Department of State Policy Planning Staff from 2004-08. He is currently a senior fellow at the Brent Scowcroft Center for International Security at the Atlantic Council.