Saving the fish in Asia and the Pacific 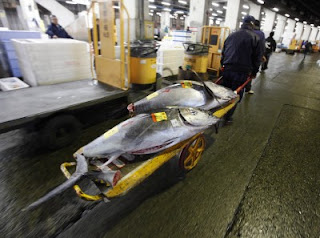 Sustainability in fisheries is doubly important because this sector provides 17 per cent of the world population’s intake of animal protein. And, as of 2010, 55 million people are estimated to be engaged in the primary sector of fish production as fishers or fish farmers, with as many as 660–820 million people, or about 12 per cent of the world’s population, involved in fish production, processing and related industries.

As part of the World Summit on Sustainable Development in 2002, most countries committed themselves to a target to maintain or restore fisheries stocks to levels that could produce the maximum sustainable yield by 2015. This target will not be met. Of the 60 per cent of the world’s fisheries in need of rebuilding only 1 per cent are making progress. The task is daunting. Overall estimates for rebuilding fish stocks require a cut of 36–43 per cent in fishing capacity compared to 2008 levels, resulting in the loss of employment of 12–15 million fishers and costing up to US$400 billion for potential boat and licence buybacks.

A variety of instruments are employed in maintaining or restoring fish stocks depending on the situation at hand and, in many cases, political will. They range from input controls such as limiting the number of vessels or restricting season length to the use of output controls in setting total allowable catch, often combined with tradable rights to fish or individual transferable quotas. While the evidence for the benefits of the varied instruments in the sustainable management of fisheries is mixed, experience suggests that a combination of rights-based systems with strong legal structures is likely to be the most successful approach.

Although fish stocks in Asia and the Pacific have fared better than in Europe and North America, it is clear that `business as usual’ will similarly seriously deplete the region’s fish stocks sooner rather than later. Both Yellowfin and Bigeye tuna are already classified as over-fished in the Western and Central Pacific fishery and stock status for Southern Bluefin tuna is in considerable doubt.

Fortunately, two recent innovations in fisheries economics, if properly applied, can help to generate more certain and beneficial outcomes for the region. The first involves breaking with practice and using the right harvest target — maximum economic yield instead of maximum sustainable yield. The second involves the correct design and expanded use of marine reserves or `no-take’ zones. Both generate `win-win’ outcomes, protecting and enhancing fish stocks for future generations and also generating larger profitability for industry and national economies.

Maximum economic yield is a harvest target that designates a catch level that maximises the difference between total discounted revenues and the costs of fishing. In other words, it seeks to maximise fishery profits, not harvest yields. This will almost always occur at fish stock levels that are greater than stocks at maximum sustainable yield. The reason is simple. If you take into account the cost of fishing it pays to have `thick’ or large fish stocks so that each time a line is dropped or a net is cast, the cost of fishing per unit of catch is lower and thus profits are higher.

The gains from following a maximum economic yield target can be remarkable. In the management of tuna stocks in the Western and Central Pacific fishery, for example, the use of a maximum economic yield target can generate an extra net present value of $5.4 billion over a 50 year planning horizon, or about $108 million per year. If the fishery follows a `business as usual’ path the cumulative expected net present value is $2.0 billion, or about $57 million per year over the same planning period, with some danger of fishery collapse along the way. The bioeconomic losses from `business as usual’ are thus $3.4 billion, and the resulting loss to Pacific Island nations is considerable.

Of course maximum economic yield targets generate smaller harvests in some cases and lower levels of employment. But higher future profits can be used to compensate fishers fully for initially lower harvests and net returns as fish stocks recover. Profits could also be used to finance transfers of funds to some countries which suffer most in the short term from stock rebuilding.

Estimates, again for the Western and Central Pacific fishery, show that added profitability can more than compensate for the loss in employment from stock rebuilding, both in the fishing industry and in fish processing sectors. In some cases this compensation can be by order of 10 to 15 times the magnitude of overall household incomes.

Marine protected areas, marine reserves and `no-take’ zones are proven to provide substantial biological and conservation benefits. A growing body of research shows that fish populations inside a `no-take’ zone can more than quadruple, providing enhanced fish stocks and needed resilience.
The fishing industry has always objected to the use of marine reserves, claiming that closing fishing grounds will simply lower profitability and catch. But this turns out not to be the case, especially when the effects of adverse shocks to fisheries, such as bad weather or the effects of climate change, are considered. Again, the reason is simple: reserves generate resilience, not only biologically but economically. They act as buffer stocks, so that the spillover from fish stocks in a nearby `no-take’ area can compensate for a negative shock to a fishery. The effect is common in already established reserves. The buffer stock effect can be substantial, leading not only to higher catches over time, but both quicker return to profitability and higher sustainable profits. In the end, reserves generate more catch, more fish, and more profits. They should be the principal fisheries management tool in Asia and the Pacific.

Something needs to be done, or fish stocks in Asia and the Pacific region will follow their North American and European counterparts on the road to collapse. The longer action is delayed, the more costly and possibly irreversible the consequences will be. Some fisheries in the world will never recover. The use of a maximum economic yield harvest target and the establishment of a system of marine reserves throughout the region are the best advice that economists can offer.

`Business as usual’ simply will not do.

Tom Kompas is Professor of Economics and Director of the Crawford School of Public Policy at the Australian National University. He also serves as a member of the Eminent Scientists Group of the Australian Department of Agriculture, Fisheries and Forestry.
This article appeared in the most recent edition of the East Asia Forum Quarterly,‘Energy, Resources and Food’.