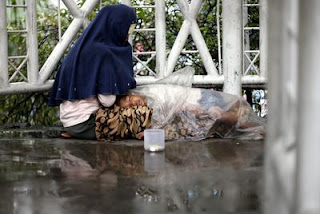 The rate of poverty reduction continues to slow in Indonesia, despite sustained economic growth.

With the exception of the 2006 increase in poverty due to the international food price crisis, the decrease in the official poverty rate from 12.5 per cent of all Indonesians in 2011 to 12 per cent in 2012 was the smallest since 2003.

Efforts to reduce poverty often fail to address the issue of Indonesia’s economically vulnerable population. For instance, while 12 per cent of Indonesians live below the official poverty line, nearly 40 per cent live below 1.5 times this line, or on less than Rp12,400 per day (around US$1.80 adjusted for purchasing power).

Small shocks can send this vulnerable population into poverty. In fact, over 80 per cent of next year’s poor will come from this group, and over half of those poor will not have been poor the year before. Consequently, eliminating Indonesia’s highly fluid poverty requires effective social assistance programs that not only assist the poor but also protect the vulnerable.

Current programs targeted at the poor and vulnerable include subsidised rice (Raskin), health fee waivers (Jamkesmas), scholarships (BSM) and conditional cash transfers (PKH). To be most effective, programs need to reach the right households. However, many of the poor and vulnerable miss out. Indonesia’s three largest poverty reduction programs target the poorest 30 per cent of households but exclude around half of this group due to flaws in both targeting design and implementation. Half of the benefits in these programs are received by non-target households.

Recent government efforts to develop a National Targeting System (NTS) should significantly improve targeting outcomes. The NTS includes a unified registry of potential beneficiaries (Basis Data Terpadu) which can be used by programs to target up to the poorest 40 per cent of Indonesian households.

To improve targeting, the NTS addresses a key problem: past efforts did not always assess the right households. In the past, targeting in Indonesia often relied upon a 2005 list of the poor, developed to target a temporary cash transfer during fuel subsidy reductions. Conducted quickly, the household survey was largely based on village head nominations. Research has now estimated that half of target households were not nominated. This could be the result of nepotism, or simply that village officials were not aware of who was living in their area.

As a result of the shortcomings of the 2005 survey, many poor households were unable to receive benefits under the scheme. Consequently, when it came time to undertake a new survey in 2011, rather than simply revisiting the same households as occurred in 2008, an entirely new list of potentially poor households was developed. This latest list combined recent census information with modern poverty mapping techniques to identify poor areas on a small scale, as well as using referrals from poor households in the community. It is expected the new list will considerably reduce the number of poor not captured in previous surveys.

To assess households for this new list, data were collected on a range of household characteristics, such as housing, water and sanitation quality, and educational attainment. From this data, household consumption was estimated using best-practice statistical methods, determining households’ economic eligibility for particular social assistance programs. The NTS is now being adopted by the major programs, including PKH, Jamkesmas, Raskin and BSM.

Poverty and vulnerability in Indonesia are also becoming increasingly urban. Half of Indonesia now lives in urban areas, up 20 per cent since 2000, with levels projected to approach 70 per cent by 2025. On current trends, nearly 60 per cent of all poor people will be urban dwellers in 15 years’ time, compared to 35 per cent now and 28 per cent 15 years ago. Yet the urban poor are less likely to receive benefits than the rural poor. Further work is required to understand the nature of the excluded urban poor, who resemble non-poor households more than the usual beneficiaries of poverty reduction programs. For example, urban poor have higher education, and better employment and housing conditions than both poor and non-poor household selected as beneficiaries.

Even the best targeting campaigns result in some poor missing out. Internationally, well-targeted programs often exclude 20–25 per cent of poor people. Thus, the current develpoment of an effective complaints and grievances system will be important. Moreover, given the fluid nature of poverty in Indonesia, the NTS will need to be regularly updated over time. In these two areas, Indonesia is expanding the frontier of world knowledge through the use of innovative field experiments to evaluate the effectiveness of different targeting methods for different objectives.


However, as important as improved targeting is, Indonesia also needs to increase the coverage of its social assistance programs. The largest programs cover only 30 per cent of households, while other programs are much smaller. Indonesia spends 0.5 per cent of GDP on household-targeted social assistance, compared to a regional average of 1 per cent, and 1.5 per cent for all developing countries. Social assistance accounts for only 3 per cent of government spending, compared to 20–25 per cent on energy subsidies, mostly for fuel, little of which benefits the poor. Reducing poverty and vulnerability in Indonesia means not only improving the effectiveness of social safety nets, but also the effectiveness of public spending. Authors: Vivi Alatas, Ririn Purnamasari and Matthew Wai-Poi, World Bank
Vivi Alatas is a Senior Economist at the Poverty Reduction and Economic Management Network (PREM), The World Bank.Ririn Purnamasari is an Economist at PREM.Matthew Wai-Poi is an Economist at PREM.