Will it be business as usual for Malaysia in 2013? 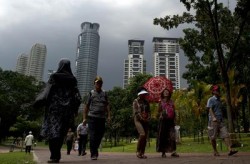 In 2012, the Malaysian economy and its politics went in different directions — the economy out-performed many countries, but there were uncertainties and tensions in politics.

Although the political environment could have dampened business confidence, Malaysia overcame this by pressing ahead with its economic and governmental transformation programs to stimulate investment and business activity.

In the first three quarters of 2012, the Malaysian economy grew by 5.2 per cent per annum. The UK’s Financial Times described Malaysia’s growth this year as ‘a gravity-defying boom’. It is on track to meet its overall target of 5 per cent for the year. This strong growth was supported by domestic demand, namely from public sector spending on infrastructure projects and direct transfers designed to mitigate the rising costs of living. Private sector investment was also strong, notably relating to the regional centre of Iskandar, which taps foreign investments especially from Singapore.

Although Malaysia has a very open economy, the global trade slowdown affected it only marginally: the economy had already been restructured so that domestic demand was the main source of growth. Likewise, Malaysia survived the vagaries of capital flows well, because its financial system is well regulated and well capitalised. Steps taken after the Asian Financial Crisis in 1998 have helped in this respect.

Yet boosting growth through domestic demand and public sector spending gave rise to concern about macroeconomic management. Household debt has risen to 76 per cent of GDP, the government debt–GDP ratio has increased to 53.7 per cent (nearing the limit of 55 per cent set by the parliament) and there is a need to reduce the persistent fiscal deficit, which is still too high at 4.5 per cent of GDP.

On the political front, the imminent 13th general election has preoccupied the entire nation. Although the term of the current parliament does not expire until March 2013, the Barisan Nasional (BN) government may dissolve parliament and call an early general election at any time. Various factors may have persuaded the BN government that a 2013 general election would suit it better. These factors include the timing of disbursement of cash support to lower income groups and ensuring that measures to ameliorate the rising cost of living and reduce the crime rate are fully implemented. Religious and cultural celebrations would also make an election impractical over the remainder of this year.

Malaysia also saw more political liberalisation with the repeal of the Internal Security Act and the introduction of the Peaceful Assembly Act. Civil society continues to advocate for reform. The Bersih movement called for electoral reform, and in May held the largest street demonstration of the year, but its message was diluted by some violence and by claims that it had been manipulated by opposition political parties. The liberalisation of political space also facilitated public opposition to a rare earth production operation by Australian company Lynas, and has fuelled the growth of Malay rights movement.

In 2013, political events will be at the forefront. In the previous general election in 2008, the BN lost its two-thirds majority in federal parliament for the first time and lost control of four states. Prime Minister Najib Razak has very high personal popularity and is intent on recovering the 2008 losses. He launched the ‘1Malaysia’ concept of an inclusive society, and is trying to reach out to Malaysian youth and the middle classes. These groups generally want greater empowerment, elimination of corruption and good governance.

The opposition coalition, Pakatan Rakyat (PR) is confident that it can perform even better than in 2008, but this is not without its challenges. The important issue of the Islamic state and implementation of sharia law, which had been agreed earlier by the three PR component parties, has resurfaced recently. Also some sections of PAS (the Islamic component party of PR) have rejected Anwar Ibrahim as the putative prime minister if the coalition were to form the government. This in turn is part of the larger question of how the PR will set major policies and govern the federation effectively.

Two thousand and thirteen will be a defining year for Malaysia. Whatever the outcome in the 13th general election, Malaysia needs to seriously transform its economy and strengthen its macroeconomic fundamentals if it is to beat the middle-income trap and achieve its goal of becoming a developed country by 2020. The public sector should reduce its economic role, the debt–GDP ratio must be reduced and the budget balanced. The tax system should also be reformed by introducing a Goods and Services Tax to increase government revenue and to widen the tax base. Finally, productivity must be increased, to offset the effect of salary increases, the introduction of the minimum wage and a higher worker retirement age.

Mahani Zainal Abidin is Chief Executive at the Institute of Strategic and International Studies, Malaysia.
This is part of a special feature on 2012 in review and the year ahead East Asia Forum