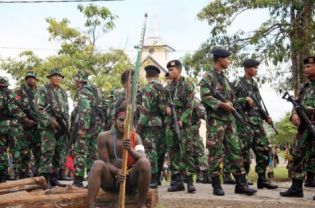 "Before his death, Matrais had been reporting on human rights abuses and rampant illegal logging in the Keerom and Sarmi districts of Papua. Following the arrests of powerful figures involved in illegal logging at the beginning of 2010, the anonymous death threats to Matrais and other journalists increased."

The Indonesian Military are mere thugs-for-hire on a very high level. Along with its instructing puppets in Jakarta.

Wondering where the core of the profits from this plundering goes to. Would love to see list of Corporations and its individuals major shareholders. So we can understand the source of it all.
Should do a thorough investigative journalism on that one. Doubt that anyone dare...
All in all, Papuans should have the right to decide for themselves. Arriving at Maranatha Convent in Waena, a town near Jayapura, Papua, a nun greets me and shows me a room where I am hoping to stay. Her first question to me still looms in my mind. “Are you from an NGO?” she asks.

Her suspicion is strange, given that the work of NGOs often parallels that of nuns.

But her reason reveals a fear of authorities many Papuans justifiably hold. She explains that a group of six Australians from an NGO had been staying at the convent until a few days ago.

“Then the military turned up, demanding to see their documents and searched their bags. The Australians were intimidated and they left,” she said.

A bit later, my friend Alice and her boyfriend Henry arrive (not their real names). Alice is a journalist at a Papuan news portal and the author of a book telling the story of political challenges faced by Papuan families. Henry is on staff at the Commission for Disappeared People and Victims of Violence (Kontras) in Jayapura.

A run-down shack tucked off the main street is home to the Kontras office, which has no identifying features, and yet it’s well known to those in uniform. Soldiers walk back and forth outside the office, monitoring who enters and exits. This type of surveillance of activists, journalists and NGO workers is normal in Jayapura, Alice and Henry tell me.

“At [the publication I work for], we’ve been infiltrated by Kopassus,” Alice says, referring to the Indonesian army’s special forces. “Most recently, a man called Ayub started working with our editing team. He never finished the work he was supposed to do and he spread false rumors, causing problems for me and my colleagues. Then one day we noticed that the official number of his regiment was stitched on the inside of his military bag. So we knew it wasn’t an ordinary military-style bag bought at a market. We confronted him and he admitted he was working for Kopassus. He was fired immediately.”

Alice talks fervently about the ongoing military repression of civil society in Papua. She first became involved in activism when she returned to Papua after completing her undergraduate degree in economics and management at Duta Wacana Christian University in Yogyakarta.

“When I returned to Papua, my father told me not to get involved in politics. He was afraid that the military would do to me what they did to him,” she says. “During military raids in the 1970s, he was humiliated by soldiers, stripped naked in front of the whole village and searched against his will. Despite what my father said, I don’t mind if I die fighting against military repression in Papua.”

One of Alice’s former colleagues has already done so. On July 30, 2010, after months of receiving death threats via SMS, the body of 29-year-old journalist Ardiansyah Qomar Wibisono Matrais was found tied to a block of wood at the bottom of the river in Merauke. His ribs were smashed, most likely as a result of repeated physical assaults, and the markings on his neck indicated that he had been strangled with something such as a belt or a rope.

Instead of an investigation, the body was flown to Makassar for further examination. Merauke police, who refused to release the forensic report or the result of the au topsy, stated that Matrais had committed suicide.

Before his death, Matrais had been reporting on human rights abuses and rampant illegal logging in the Keerom and Sarmi districts of Papua. Following the arrests of powerful figures involved in illegal logging at the beginning of 2010, the anonymous death threats to Matrais and other journalists increased.

Independent evaluations verify that threats to journalists are a true danger in Indonesia, where year after year the country’s performance on freedom of speech reports has become increasingly abysmal.

Like Matrais, Henry receives death threats via SMS from anonymous numbers every week. Henry has been working at Kontras for the past two years.

“My family is from Maluku but I was born in Jayapura and have lived here all my life,” he says.

Opposite Henry sits Barry (not his real name), a young man born in the Jayawijaya highlands, who now works at the Institute of Human Rights Studies and Advocacy (Elsham) and for an NGO called Unite For Truth (BUK).

Twelve years ago, Barry was in his final year of high school when his brothers, father and friends were tortured and imprisoned by police in Abepura.

At 1 a.m. on Dec.7, 2000, police broke down the doors of student dormitories in Abepura, forcing 105 students into trucks which took them to police headquarters at Kota Raja. Students were then stripped and tortured for five hours, according to testimony provided by students and the National Commission on Human Rights (Komnas HAM), which was later presented at the UN Human Rights Council in Geneva.

Three students, Ori Ndoronggi, 17; Elkius Suhuniap, 20; and Johny Karunggu, 20; died while in custody as a result of police brutality.

Many others, including eight of Barry’s friends, died from the wounds inflicted upon them at the Kotaraja police headquarters in the weeks and months that followed the incident.

“The police bashed my brother and father on the back of their heads with the butts of rifles until blood poured out of their mouths and they became unconscious,” Barry says.

Despite the deaths of three young men while in police custody, there were no convictions in the trial that followed. Instead, the police responsible for the torture and killings have received promotions, while the memories of violence are still fresh in the minds of local people.

“This year [2012] on Dec. 7, we held a remembrance ceremony for the victims of police and military violence. This is something we do every year to honor them. We have to continue to fight for justice for our brothers and sisters killed and tortured by the police and military,” Barry says.

As a university student, Barry founded the Community of Abepura Victims (KKA), and in 2007, he started BUK to fight for the rights of victims of police and military torture from Abepura, Wamena, Waisor, Kimaam, Assue and Maryedi.

Every week, Barry and BUK members visit prisons in Jayapura to bring coffee and food to political prisoners.

People with convictions mirroring those of Alice, Henry and Barry can be found all over Papua. Considering their experiences, it is no surprise that local people describe the law as hiburan (entertainment) and Papua’s special autonomy status as hiasan (decoration).

Justice, not separatism, is the first thing on these peoples’ minds. The longer justice in Papua is trampled on, the stronger the urge toward separatism becomes.

The military, the police and the Indonesian government must acknowledge the unhinged brutality used to crush civil society in Papua if there is ever to be peace. An acknowledgement is the first step. Reparations must be made and the perpetrators of crimes punished for their acts.
Brooke Nolan is a PhD student from the University of Western Australia with a focus on Indonesian studies.