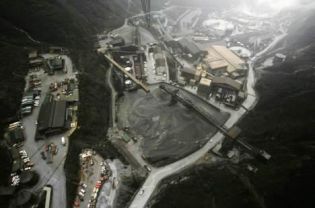 An aerial view shows the site of the Grasberg mine, operated by the US-based Freeport McMoRan Copper & Gold in Indonesia's Papua province in this Nov. 4, 2010 file photo. (Reuters Photo/Muhammad Yamin).

Freeport-McMoRan Copper & Gold has been scrambling to reassure investors that its controversial diversification into oil and gas does not mean it is facing problems extending its four-decade-long control over Papua province's hugely profitable Grasberg copper and gold mine.

"Resource nationalism is always a concern when we operate in the countries we do," chief executive and president Richard Adkerson said in a conference call last month.

"But there is no development in Indonesia or Africa that is driving us to do this."

The world's fifth biggest mining company is battling political headwinds ahead of Indonesia's 2014 elections in efforts to negotiate a 20-year extension to its contract of work, which expires in 2021.

Freeport claims it is entitled to two 10-year extensions under wording in the existing 1991 contract. But the Indonesian government is insisting that it conforms with the 2009 Mining Law by converting the contract to a business license, which does not carry the same degree of certainty.

Adding to that uncertainty, the constitutional court is hearing a challenge to the mining law by the same nationalist lobby which recently won a decision forcing Jakarta to restructure how it regulates the oil and gas industry.

Freeport has to get things settled before it dives much deeper into a US$16 billion program which will convert the Grasberg from a vast open pit into the world's biggest underground operation, with electric rail and 900 km of tunnel.

The company is already in negotiations with the government, but given the political atmosphere, it is unlikely to reach any deal until after the 2014 elections — and then with an entirely different set of ministers.

Adkerson has sought to sweeten the pot by offering to list subsidiary Freeport Indonesia on the Indonesia Stock Exchange, correctly noting that it might help to put the company in a more positive light.

The contract extension aside, the Grasberg mine has other problems. Freeport was forced to halt operations for the last three months of 2011 in the face of an unprecedented strike involving 8,000 of its workers.

With the labor agreement coming up for its biennial review in March, Freeport is now bracing itself for another round of union demands that could cause further disruptions in production.

A steady stream of foreign security experts have been advising on the best way to guard the mine, especially the 100 km road linking Grasberg to the lowland town of Timika which has been the target of frequent sniper attacks.

Because of its past association with the Suharto regime and environmental and human rights infractions, real, imagined and invented, Freeport has become the foreign company most Indonesians love to hate.

Now it is in trouble with its big shareholders as well. "This is one of the worst tele-conferences I've ever heard," snapped Evy Hambro, managing director of investment firm BlackRock, as executives sought to justify the planned acquisition of two oil exploration firms.

The uproar stems from an apparent conflict of interest in a $20 billion deal to buy McMoRan Exploration and Plains Exploration and Development, which will cost the Arizona-based mining giant about two-thirds of its market cap.

Because of the way it is structured, the deal did not need shareholder approval, an issue that infuriated BlackRock and other investors given management's financial interest in McMoRan Exploration and a 17 percent drop in the value of Freeport's stock.

McMoRan's shares plunged 35 percent last November because of problematic flow tests at its deepwater Davy Jones site in the Gulf of Mexico, which it claims has the potential of being the biggest oil discovery in a decade.

Adkerson, who is also co-chairman of McMoRan, talked about the "complexities" resulting from overlapping management, with six directors holding dual board membership in the two companies.

In essence, Freeport is going back to its roots. Co-founded by geologist James "Jim Bob" Moffett in 1969, McMoRan Oil merged with Freeport Minerals in 1981 and later sold off its oil and gas assets to help fund the development of the Grasberg mine.

New Orleans-based McMoRan was spun off in 1994, but the company continued to be run by the hard-charging Moffett, the concurrent chairman at Freeport and the guiding force behind the latest move.

Recounting the company's history of risk-taking in remote Papua, which stretches back to the late 1960s, Moffett basically asked shareholders to trust him. "We know how to swing for the fences," he rasped.

Described by Adkerson as the firm's "cornerstone asset", and by Moffett as "the best mine in the world", the high-altitude Grasberg mine contributes to 31 percent of Freeport's revenues — even if the strike did make 2012 an exceptionally bad year.

But that dependency is expected to drop to 23 percent as a result of a deal that Adkerson calls an "add-on and not a diversion", with 74 percent of future revenues expected to come from mining and 26 percent from what he says will be self-funding oil and gas operations.

The acquisitions create a resource conglomerate worth $60 billion, inclusive of debt, and mark a major shift in strategy for a company which used its Grasberg riches to gobble up Phelps Dodge, a firm much bigger than itself, in 2007.

With 10 operating mines in North and South America and Africa, the world's biggest copper producer and fifth biggest miner has been looking for opportunities outside its core business, worried about the lack of new world-class copper deposits.

Their eye firmly on the short term, many shareholders are clearly not convinced that getting back into oil and gas is the way to go.

By John McBeth Reprinted courtesy of The Straits Times