Japan’s still got ‘it’ 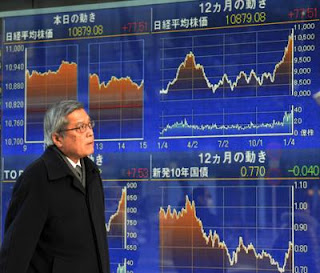 Twenty-two years since the collapse of Japan’s bubble economy in 1990 — referred to by many as the country’s second major defeat after World War II — the people of Japan are still without a clear recovery scenario.

Just two decades after that defeat, in 2011, Japan suffered the tragedy of the Great East Japan Earthquake. So it’s no wonder the country and its people appear victim to an absolute sense of pessimism.

But the Japan story is not all bad. The past year has seen a revival in Japan’s financial strength. US and especially European financial institutions have receded in strength due to the euro zone sovereign debt crisis. This has led to a relative rise in the presence of — and hence expectations toward — Japanese banking institutions in overseas markets.

Furthermore, even though Japan is in a permanent state of fiscal instability in terms of its government-level finances, not many countries in the world would have been able to provide supplementary budgets as large as JPY20 trillion (US$237 billion) following a disaster like the Great East Japan Earthquake. And Japan’s private corporations are by and large financially healthy: almost half of Japan’s listed corporate enterprises are unencumbered by debt. In the absence of leverage, these companies are able to strongly resist financial stress even if stock prices languish. The financial stability of Japan’s financial institutions and its government and private corporate enterprises makes Japan a very rare case in the world. I like to think of countries as having entered in a ‘Sovereign World Cup’, in which they compete for survival using their financial strength. Japan would be in with a very strong chance of making the final. Despite the focus upon Japan’s fiscal deficit, it should also be noted that the country is one of the few ‘winners’ in the government bond market.

The state of the global economy, centering on the US and Europe, remained unchanged in 2012.

The world faces balance sheet adjustments similar to Japan’s in the aftermath of the collapse of the bubble economy. But there is a crucial difference this time: the centre of the global economy is shifting to Asia. Developed countries including the US, Europe and Japan are now competing to access new markets in developing Asian countries. Japan’s geographic proximity to Asia gives it a competitive advantage in this regard, and its business model still includes strong domestic demand. So there is scope to re-examine ‘Japan pessimism’. On top of all these advantages, I still believe Japan possesses something intangible — the ‘it’ factor that will lead to the country’s revival.

Japan has already completed its balance sheet adjustment process and still possesses various positive attributes such as technological prowess, a diligent labour force, high levels of savings in the private sector, the world’s largest external net assets, sound corporate finances and stable financial institutions. Japan has already experienced many of the problems that many developed countries face today. It has survived crises of the environment, energy and foreign exchange rates; endured the collapse of an economic bubble; and is dealing with its ageing population. Japan’s experience means it has great economic and leadership potential in Asia — it has already faced down problems that greatly concern the region’s emerging countries.

A major recent shift is the revival of Japanese corporate ambitions overseas. Such aspirations are certainly evident not only among large corporations, but also among small and medium companies based in areas other than Japan’s metropolises. Japan has entered an age when any person working for any company can be posted to emerging countries, especially in Asia.

These companies are taking steady steps to expand overseas, and at home, because they think they have a sound future. Some in Japan view the overseas focus of Japanese companies as a ‘hollowing-out of domestic industries’. Nevertheless, companies that venture out and secure overseas frontiers provide rich rewards to the home country in the form of business opportunities — without being limited by short-sighted strategies to nurture domestic industries. Despite concerns that the global economy will face difficult challenges in 2013, Japan has an opportunity to develop a new model in Asia. It remains a country that possesses the ‘it’ factor, an advantage that I hope the new Abe administration can exploit.