Does Hanoi deal with Beijing for its people, or for itself? 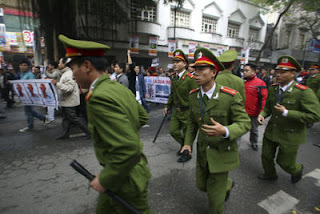 China’s recent aggression in the South China Sea has provoked civic protests in the two largest cities of Vietnam.

Participating in these protests were nationally well-known personalities, scholars, young people and students. In successive meetings with their Chinese counterparts, Vietnamese officials have agreed that they would not allow this sort of protest to affect bilateral relationships. This agreement meant that protests would be suppressed even by force, and it seems Vietnamese authorities have kept their word. The break-up by police forces of the civic protests has placed the communist government in the strange position of crushing a demonstration in support of Vietnamese claims.

Protests in any form and for whatever reason have never been accepted by the communist government. The Communist Party fears that these sorts of protests could lead to a larger anti-communist social movement like the Arab Spring, threatening the survival of authoritarianism in the country. It justified the suppression of protests by saying that hostile forces took advantage of them to incite violence and aimed to overthrow the government. But Professor Tuong Lai and Le Hieu Dang reject those allegations.

Tuong Lai and Le Hieu Dang, both individually and in cooperation with others, issued statements, which have been widely circulated on social media networks, denouncing what they called violent breaches of citizens’ human rights and freedoms by the police. They requested an investigation by the authorities to find out who ordered the suppression of the protests and why. Their requests have yet to be met by the authorities.

This is not the first time anti-China protests have taken place in Vietnam — similar protests have occurred since 2007. In 2011, anti-China nationalism in Vietnam grew when Chinese maritime surveillance ships intentionally cut the cables of a Vietnamese vessel conducting seismic surveys in waters claimed by Vietnam. The protests this time were launched after a similar incident — state-run oil and gas company PetroVietnam accused Chinese fishing boats of cutting the cables of one of the its vessels, again operating in the Vietnamese waters. Last year, a group of Vietnamese established a football team wearing ‘No-U’ T-shirts to protest China’s self-proclaimed cow-tongue line in the South China Sea. The team has regularly organised so-called ‘No-U’ football matches.
Anti-Chinese protests have placed the Communist Party in a dilemma. On the one hand the Communist Party has said that a peaceful region and stable environment is essential for Vietnam’s development. Indeed, economic growth has been the only way for the party to maintain and consolidate its legitimacy amid public distrust, which continues to build due to economic crises and rampant corruption. The party understands that a confrontation with China would not be good for its development policy. That is why in direct communication with China on the South China Sea the Vietnamese government tends to use less incendiary rhetoric than the Philippines government, for example.

On the other hand, the Communist Party’s domestic legitimacy is being challenged by its constituents, who disagree with its response to China’s relentless encroachment on land, islets and sea areas claimed by Vietnam. The party always says that it has no other interests other than those of the nation and the people. In an article published by most state-run newspapers, President Truong Tan Sang had to reaffirm that the Communist Party ‘is not selling the country’ — that it is not trading off its interests with the people’s. But it is hard for the Communist Party to win the trust of the people and reassure the public of its attitudes toward China when anti-China protests continue to be broken-up, anti-China demonstrators are still arrested and detained or violently harassed, and when the president, in another article, denounces a public figure as ‘bringing snakes home to bite domestic chickens’.

The Communist Party is no doubt in a dilemma in dealing with Vietnam’s territorial disputes with China. To get itself out, the party must make a choice between standing on the same side as the people or on the opposite.

Hai Hong Nguyen is a doctoral candidate at the School of Political Science and International Studies, the University of Queensland. East Asia Forum