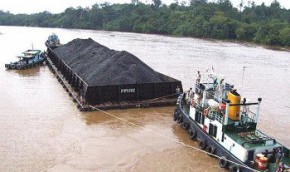 The Editor
The Financial Review

Regarding the full-page advertisement 'Let's talk about coal' (AFR 14 Jan), yes, it's high time we talked about this abundant, low-cost energy source which has given mankind unprecedented benefits clearly not appreciated by the signatories to and sponsors of this disgraceful display of ignorance. The greenhouse gas hoax has gone too far and the proponents of this scam must put up or shut up. There is no historic evidence that carbon dioxide has caused climate change, rather increased carbon dioxide levels in the atmosphere follow cyclical periods of warming. And if any of the good professors and doctors can explain the mechanism of heat transfer whereby this dreaded trace gas in the atmosphere bounces heat back to the surface of the planet in the manner of a greenhouse, they should deservedly be awarded the AL Gore Nobel prize for creative science fiction.

A steam train in a tunnel - that’s a clear case of pollution
Air’s black as pitch, your nostrils twitch, but what a great solution
Electric trains proved right as rain, the power’s from a station
Where chimney flues scrub out all hues of soot particulation.

The only vapours from the site are CO2 and water
When carbon mates with oxygen, they have a lovely daughter
Her beauty though is not for show, her hidden charms unlisted
Like Cinderella pre the ball, soot-faced and ugly-sistered.

There is no doubt a glass of stout is good for our well being
And that there brew needs CO2 to make the cork worth freeing
And soda water isn’t short’a carbonated gases
Or do you think that CO2 pollutes our lads and lasses.

The dry ice in your Esky won’t contaminate your food
It’s CO2 in solid form, its gas will not intrude
Solid CO2 won’t melt, it sublimates instead
And doesn’t turn to water which would soak your picnic bread.

The great sponge cakes your mother makes need CO2 for lightness
Champagne contains some CO2, to stimulate its brightness
So what about that greenhouse gas, the monster that we fear
It’s harmless as that self-same gas that frothifies our beer.

This greenhouse thing has gone too far, the hoax must be exposed
A greenhouse is a building with glass ceilings interposed
Allowing sunlight to come in to power photosynthesis
Where Cinderella has a ball and plants can only win with this.

The heat is trapped, and heat transfer obeys the laws of heat
Conduction is through contact, that’s a hot-cold, one-way street
Convection only happens within liquids and with gases
Radiation’s wild and free, but slows down in molasses.

Our planet is no greenhouse and for that we’ve gotta thank it
Its atmosphere is mostly clear and wraps us in a blanket
And H2O it rules you know, in fact it’s pretty neat
If you meet an iceberg please respect its latent heat.

The blanket that surrounds us is a blanket in a squillion
The CO2 part’s pretty thin, four hundred parts per million
When yarns are stretched as thin as that, it’s like a nylon stocking
It’s measured by deniers, what it covers up is shocking.

King Coal has brought us from the slums, to fortune and to favour.
The real deniers criticise. King Coal’s supporters waver.
But truth will win and then the fraud of taxing carbon users
And trading air to our despair, will join the list of losers.

The fragrance of the sweet fresh rain, the moisture, drops and dew
Owe so much of their sparkle to our friend called CO2.