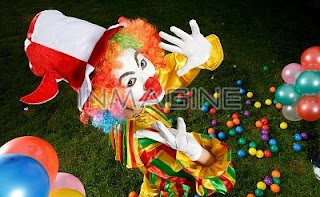 Send in the Clowns: Celebrities Take Over Indonesian Politics
Shut down the Institute of Governance Studies and close the State Administration Academies. Send the students to study acting at the Jakarta Art Institute instead.

The way regional elections are going in Indonesia today, the stars of the sinetron (soap operas) are more likely to succeed in politics than their better qualified peers.

The Institute of Governance Studies (IIP) and State Administration Academies (APDN) are the institutions that traditionally provided capable candidates for regional elections. APDN graduates used to work as sub-district chiefs, while those from IIP became regency or district chiefs .

But now, that logic has been turned upside down. To become a regent or district chief, mayor or governor, one does not have to attend APDN or IIP, because popularity rather than academic qualifications is what counts in today’s regional elections in Indonesia.

This euphemistic conclusion was raised by a friend at a Jakarta coffee shop this week as we discussed why it was so easy for celebrities to sell their platform during elections, even when they do not meet rational requirements such as knowledge of state governance and bureaucratic leadership experience.

Entertainment stars can easily beat graduates of APDN and IIP in today’s political landscape. A high-school graduate who plays a role in a soap opera can attract more votes than a state administration expert, or even a US-educated PhD graduate. Put them together in a regional election, and the experts are sure to lose.

The reason is because in Indonesia today, academic qualifications, global vision, integrity and leadership capacity are not what drives the people to elect a candidate. Instead, what matters is the popularity that comes from his or her appearances in television shows, films, music concerts and on studio albums. The mass media amplifies such gimmicks and, to some extent, makes the problem even worse.

That is why dangdut singer and musician Rhoma Irama is moving ahead against all odds to become a 2014 presidential candidate — though skeptics say he won’t have a chance against the better-qualified opposition.

Political parties are mandated by law to conduct proper civic education and groom members to fill legislative and executive bureaucratic positions. Instead, they are simply riding on the popularity of celebrities without even bothering to upgrade the qualities of these vote-getters.

If a celebrity is believed to be a good magnet for voters, the least a party could do is upgrade his or her capabilities. Instead, parties today feel a greater obligation to upgrade the popularity of candidates than their ability to do the job.

Look at the track records of Ronald Reagan, Arnold Schwarzenegger, Clint Eastwood and many other American movie stars turned political leaders. Being movie stars propelled instead of obstructed their rise to executive positions.

In Indonesia’s experience, it is a confusing mixture. Sometimes politicians are the jockeys and parties the horses, sometimes it is the other way round. Some political parties ride on the popularity of their members, while others are ridden on by those who act like corporate owners or heirs of a dynasty.

As a result, proper candidate grooming is depressingly absent, leaving Indonesia with the problem of finding the right candidates to fill many positions in both the legislative and executive branches of government. This explains why finding a proper presidential candidate is now considered a luxury in Indonesia.

A further consequence is that we will continue to have a weak House of Representatives, because the human resources provided by political parties will continue to be far from qualified. And a weak parliament can only produce a lot of rubbish.

A senior lawyer in a private meeting on Friday with a parliamentary leader, during which the Jakarta Globe was also present, said that in its history, the Indonesian parliament had produced approximately 600 laws, some 100 of which were full of errors. The laws had many legal defects because the lawmakers involved did not have sufficient knowledge of the content and background for legislation.

Why has this happened? Because the lawmakers prefer to rely on their narrow-minded perceptions of the bills instead of finding the experts on Indonesian campuses to draft them properly.

More than 32,000 PhD holders, professors, and well-qualified experts are there in the academic world, but their expertise is not being used or even respected as a national asset by lawmakers.

When clowns produce laws, the result must be fascinating — because at the end of the day, the Constitutional Court will annul them. And that’s what has happened.

During the term of Mahfud M.D. as chief judge, 60 laws have already been annulled, simply because they ran counter to the Constitution — not a big surprise to me.

Because Indonesian legislators are incapable of producing sound laws, even though the country has been freed from colonial powers for almost 68 years, it still relies heavily on the laws that were produced by the Dutch colonial government. The criminal code, for instance, was produced in the 1800s and is still being used to date.

The bottom line of this thesis is the question of how to produce credible political leaders and lawmakers.

Legally, it is the duty of political parties to groom such human resources to run the state. Alas, according to opinion polls, political parties are the “least trustworthy” institutions in the country, though they claim to represent the public.

The House of Representatives, which is the product of political parties, is just as unreliable because “70 percent of House members are carriers of disaster,” according to its own speaker, Marzuki Alie.

That means we have allowed our laws to be written and adopted by unqualified lawmakers, who claim to have the legitimacy as the people’s representatives.

A bigger tragedy is that nobody in the state leadership thinks this is wrong.

To correct the situation, political parties must upgrade their recruitment procedures to enable qualified politicians to contest elections. The parties must make it compulsory for members to compete in visionary ideas and problem-solving concepts through party conventions, and this mechanism must be mandated by law.

In this way, politicians who will later fill executive and legislative positions will be qualified people known for their state governance expertise, visionary ideas, problem-solving concepts and leadership capacity.

To make this happen, a starting point would be to amend the law on political parties to include mandatory requirements for the parties to conduct proper recruitment of members based on academic qualifications, integrity, global vision and leadership traits.

The parties must cooperate with universities to set objective criteria for the selection of its members.

Parties must also be obliged to conduct leadership conventions, so that the appointment of leaders is based on fit and proper tests that are open to the public, including presentation of a visionary national development strategy and concrete problem-solving concepts — unlike what is happening today, where only financiers or top leaders of political parties can put themselves forward as candidates.

Once the right filtering measures are in place, the casting process can truly begin.

Pitan Daslani is a senior political correspondent at BeritaSatu Media Holdings of which the Jakarta Globe is a subsidiary.