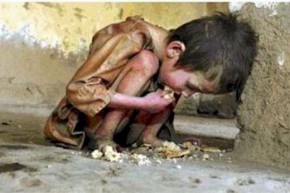 It appears to be happening again

Recent foreign visitors to Pyongyang are often impressed by the new construction that seems to be sprouting up everywhere in North Korea's drab capital. New high-rise apartment buildings have been erected, department stores and theaters refurbished and even amusement parks and theme parks opened.

"Ever since Kim Jong-un assumed the position of supreme leader, the media in North Korea and visiting foreigners have reported on the beautifully developing capital, Pyongyang. But in the shadow of the 'gorgeous' capital a hidden famine has broken out," says Jiro Ishimaru, chief editor of Asiapress in Osaka, a North Korean watching service with numerous clandestine reporters throughout North Korea.

The dark secret behind all of this new capital glitz and glamor appears to be a raging famine in the two Hwanghae provinces, where by some estimates 20,000 people have died of starvation in South Hwanghae alone in the year since Kim Jong-il died in December, 2011 and was succeeded by his son and heir, the 29-year old Kim Jong-un.

The Hwangwhe provinces, north and south, lie just south of the capital, between Pyongyang and the South Korean border. They are often said to be the "breadbasket" of North Korea, supplying food to both key elements of North Korea's social order, the million-man army, many of them deployed along their southern border facing South Korea, and the capital, Pyongyang.

For the past year, however, they have not been able to feed themselves, due in part to the demands of these two powerful groups, In particular the capital has required considerably more of the provincial agriculture output to feed the thousands of workers who were imported to work on the major construction projects underway for the past three to four years.

So to the familiar culprits of food shortages, floods followed by severe drought, can be added a political, and completely man-made dimension to this latest famine, which has not been seen as much in the previous food shortages that have plagued North Korea for the better part of the last decade.

The country has only limited resources of capital and foreign exchange, and the much of these funds have been diverted to pay for elaborate entertainment complexes, including roller coasters from Italy and dolphins to stock a theme park instead of food. "You can see where Kim Jong-un's priorities lie," said Ishimura.

In order to consolidate his rule the young Kim must have these two important elements of North Korean society on his side. Which is why so much of the food from Hwanghae has been taken away for the "food for the army" and "food for the capital" projects, Ishimura continued. His organization reports on regime commissary officers ransacking villages and dwellings looking for hidden stockpiles.

The effort to turn Pyongyang into a showcase capital actually precedes the rise of the young Kim by several years. As far back as 2008, North Korea watchers, such as the news site nkeconwatch.com, have reported on new construction in the capital and wondering where the money would be coming from to pay for it all.

The new buildings and restoration projects were aimed to coincide with the "Day of the Sun," celebrations honoring the 100th anniversary of the birth of North Korea's founding dictator Kim Il-sung on April 15, 2012. Indeed, the elaborate funeral for Kim Jong-il, the birthday festivities, and other celebrations of the Kim family have strained the country's budget.

The exact number of people who have starved to death in Hwanghae is hard to pin down, but is likely in the tens of thousands, Ishimura says, based on reports from his own sources. There have also been numerous reports of cannibalism according to his sources on the ground. The situation is said to be worse than the "Arduous March", the Korean term for the famines of 1994-1998.

"Kim Jong-un was photographed last summer with his wife visiting one of Pyongyang's new theme parks, but as far as is known he has not visited the disaster areas just south of the capital or been photographed meeting with victims, Ishamura said. "Indeed, the government has apparently said nothing about the famine and done nothing to seek additional foreign food aid."

The younger Kim seems to have deliberately scuttled his chances of getting more foreign food assistance by his determination to launch long-range missiles in defiance of UN resolutions and world opinion. Washington declined to consider more aid in the wake of the April launching that fizzled. The west's position was reinforced by the successful launch in December.

South Korea's new President Park Geun-hye's position is somewhat ambiguous, but she seems also determined to link food aid on progress in dismantling North Korea's missile and nuclear weapons programs. Since there is essentially no progress on these issues, the prospects for more immediate aid seem slim. The famine is likely to continue. Asia Sentinel