Why two Asias may be better than none 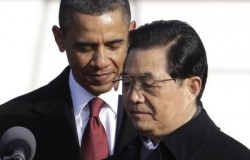 As is well known, the Obama administration is now firmly focused on engaging Asia.

The United States is engaging with ASEAN and related Asian regional institutions, encouraging high-quality trade liberalisation — mainly within the framework of the Trans-Pacific Partnership (TPP) — and returning its military attention to the region.

China has viewed these initiatives with much suspicion and regards them as detrimental to its interests. Chinese suspicion means that for the rest of the region, including some of America’s own allies and friends, the US ‘rebalancing’ strategy has created an Asian security dilemma: how to court Washington without hurting Beijing.

This dilemma is aggravated by developments in Asia as China builds steadily greater economic muscle while the United States remains the strongest military power. Some see grave danger in this trend. A recent essay by Evan Feigenbaum and Robert Manning presents a scenario of ‘two Asias’: an ‘Economic Asia’ that is dynamic and increasingly integrated, and a ‘Security Asia’ that is riven by conflict and shows little political will among the major powers to resolve deep-seated suspicions and tensions. Moreover, the authors argue that ‘Economic Asia and Security Asia have become increasingly irreconcilable’.

I disagree, especially if the implication is that Economic Asia will gravitate toward China. The idea of an Economic Asia and a Security Asia in a seemingly irreconcilable relationship makes for a fashionable sound bite, but it misreads the nature and implications of the emerging economic and political order in Asia.

For one thing, the idea of an Economic Asia with China at its centre ignores the reality of the dynamics that brought about regional economic integration in the first place. Japan, a key US economic partner and ally, started the process and still plays a vital role in it. So do ASEAN, South Korea and India. While China now plays a bigger role in the regional economy, the assumption that Asia’s economic integration will inevitably be Sino-centric is questionable.

Moreover, Security Asia is not about to close its door to the US and submit itself to Chinese dominance. China may be an economic giant, but it does not have the ideology to attract natural followers and allies or the diplomatic finesse to win long-term friends. And though China might acquire a military capacity for denying access to areas closer to its territory, that is hardly sufficient for dominance of sea lanes and the surrounding neighbourhood. China’s ‘denial without dominance’ posture is actually good for Asian stability, as it satisfies China’s need for military status without allowing it to impose a kind of Monroe Doctrine over its neighbours.

Even if a ‘two Asias’ scenario materialises — one in which an Economic Asia is dominated by China and a Security Asia is dominated by the United States — greater regional instability will not necessarily ensue. There would be advantages to Asia’s security and economic relations being dominated by two different great powers, for at least three reasons.

First, it ensures that neither China nor the United States can be so dominant as to be arrogant. The last two decades have shown that a truly unipolar world, where the United States is both the dominant economic and military power, can invite resistance, heightening the prospects for conflict and war.

Second, the ‘two Asias’ situation would discourage a US containment strategy directed at China. What Asia needs is a US policy that pursues balancing without containment. This would be more likely if US–Asia and US–China economic ties remain strong and the United States does not push its military rebalancing strategy too far.

Third, an Asia in which the United States is militarily dominant but China is the number one economy may mean Asian countries are less likely to engage in behaviour that could needlessly provoke China.

This is not to say that an Asia in which economic integration is dictated by China and the military balance is controlled by the United States would be immune to conflict. But conflict can be avoided if the United States, China and Asian countries undertake certain measures.

Washington should try to ensure its rebalancing strategy does not stoke Chinese insecurity. It is unfortunate that the rebalancing strategy, which began as a limited military response to the rise of China, has become a catchall for Washington’s broader Asia policy. In November 2012, US National Security Adviser Thomas Donilon conflated the essentially military rebalancing with the economic strategy under the TPP, which excludes China, and the political and diplomatic strategy to deepen US engagement in Asian regional institutions such as ASEAN and the East Asia Summit (EAS).

This is confusing, since the United States decided to sign ASEAN’s Treaty of Amity and Cooperation and join the EAS before anyone had mentioned the terms ‘pivot’ or ‘rebalancing’. The United States has conflated what is essentially a military approach, underpinned by a balance of power mindset, with Asia’s pre-existing cooperative security approach, which underpins the ASEAN Regional Forum, APEC and the EAS. Cooperative security means ‘security with’ China; rebalancing means ‘security against’ China.

China also bears responsibility for discouraging conflict in Asia. Chinese government officials should not provoke disputes or give in to the temptation to use nationalism as a weapon against China’s neighbours. Beijing should also be more pragmatic about its stance on the South China Sea. Every aggressive move by China plays into the hands of hard-liners in Washington and translates into greater support in the region for a US containment, rather than balancing, strategy.

Finally, other regional actors should also exercise restraint, particularly Japan, which is no saint when it comes to nationalism. ASEAN faces uncertainty because of Cambodia’s controversial leadership of the grouping last year. But this need not be fatal as long as the more consequential ASEAN members, especially its original members, do not break rank and make separate deals with China.

In short, the second Obama administration should be careful not to make its rebalancing look like containment. Rather, it should use the positive economic links and interdependence that have emerged over the past decade to foster overall regional stability.

Amitav Acharya is professor of International Relations at the American University, Washington, DC, and chair of its ASEAN Studies Center. He is the author of Whose Ideas Matter: Agency and Power in Asian Regionalism (Cornell, 2009), and the forthcoming essay, ‘Power Shift or Paradigm Shift? China’s Rise and Asia’s Emerging Security Order’ (International Studies Quarterly, forthcoming).
A version of this article was first published in World Politics Review.