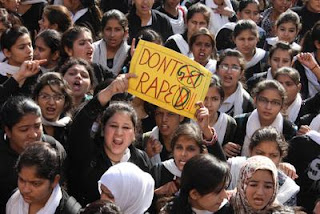 I still remember how, in the early 1990s, a largish, unknown man just flopped on my lap on the aisle seat. When I mildly expressed displeasure, his demeanour switched between menacing and casual, forcing me to shut up and leave him the seat. This was not an isolated experience: many women, whether in Delhi or Bangalore, have had similar experiences in their daily lives and felt amazed at how ‘naturally’ traditional gender ideologies are ‘performed’ in public.

So is what came to be known as the Delhi gang rape case different (and if so, how and why) from the myriad forms of violence that Indian women face every day, whether in urban or rural India, at home or in public, from close family members, spouses or completely unknown strangers?

Now is precisely the time to talk about the multiplicity of rapes that women face in India. India is a country where women’s bodies are stamped by the power of patriarchy — the rape on a city street is only one expression of that power. There are also rapes by the police, rapes during communal violence, rapes during conflicts, caste rapes, retributive rapes and, above all, rapes within the family and within the marriage. It is like that famous question posed by Buddha about grief being omnipresent: is there any Indian woman who has not at any point in time encountered violence in her life? Also, no matter where it is happening, by whom and the extent of the brutality, a rape remains a rape.

The incidence of reported rape in India is far less than that in Western countries, while other heinous crimes, such as murder, are reported in comparable or higher numbers. Herein lies the problem. Reporting rates are lower because both the police and the victims are reluctant to register the case. Both groups live according to prevailing gender norms. The gross display of physical aggression against women in this case has to be placed in the context of gender norms in India: to give just one example, sons are overtly preferred to daughters, which has led to a steadily declining female–male ratio and the loss of as many as 150 million women.

In interpreting the Delhi gang rape, a number of issues need to be unpacked. It is possible to see the rape as a symptom of challenges to an essentially patriarchal society — if that is true why does that challenge lead to extreme forms of violence against women in India? In this theory, there is a crisis of masculinity as more and more middle-class urban women enter the workforce in response to the modernisation of parts of society. To put it very broadly, Indian men are searching for a role as the country modernises rapidly, causing a social upheaval that is more strongly felt in the cities.

Such an economic argument is very common. It essentially puts violence against women down to intensifying inequalities between the rich and the poor. Indeed, the liberalisation of the economy has brought the world to everyone’s fingertips in India; pornography, the television and Bollywood are continuously presenting a particular version of masculinity for young men to follow.

The problem with this explanation is that violence against women (and men) has been a hallmark of Indian society for centuries. Violence is a typical expression of power and has traditionally been used to force the individual into socially accepted behaviour. In rural areas, power is determined by caste, but in cities it can derive from conspicuous consumption and overt displays of money.

The poor and the weak, who may be subjected to violent treatment on a daily basis, also seek the opportunity to exert power over others. This context needs to be factored in to any understanding of the Delhi rape case. So, a better question is this: what gender ideologies encourage and perpetuate such extreme forms of violence in India?

In answering that question it is important to remember that not all Indian men are violent, contrary to their portrayal in some British and American media. A segment of Indian men and boys are targets, not perpetrators, of violence. The Delhi rape case and other violent actions are symptomatic of, or encouraged by, prevailing gender ideologies, or practices that sanction such violence against those who are seen as ‘deviants’ to age-old social norms. This is where women as much as men are to blame: not because they have ‘brought it on themselves’, but because they have failed as mothers and sisters to bring up men to alternative formulations of gender.

The Delhi gang rape was not an isolated incident. It occurred in a country where there are 150 million missing women and where a girl was killed by her parents for falling in love with a lower-class man, to single out two incidents of many. Add these examples to the innumerable unrecorded incidents of violence that occur every day, and it is clear that modern, independent India is failing. Modern Indian society is not being conditioned to understand that both women and men must be free and equal in order to develop together.

That is why the most heartening thing about this sordid episode was the presence of men in protests against rape. The word ‘feminist’ was no longer a derogatory term, and men were able to ‘come out’ in their support of women. The massive remonstration in Delhi over the gang rape was indeed unprecedented: intervention and protests against violence to women by feminists of all genders. Although this population represents a tiny, educated segment of ‘new India’, it brings hope that gender ideologies can yet be changed.