Dealing with corruption in Indonesia 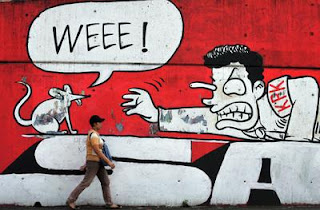 Corruption in Indonesia is pervasive

It exists at all levels of the executive branch of government (central, provincial and local), and in other institutions ¾ including the parliament (central and local), the attorney general’s office, the police force, and the judiciary.

No country with such a high degree of corruption has been able to become truly prosperous, democratic and equitable. This is because an enormous amount of funding is accumulated by corrupt officials, instead of being invested in sectors of the economy which could aid Indonesia’s development, such as health and education.

The Indonesian government, specifically the central government, has to work to create an environment where anti-corruption efforts can succeed. Reform effort aimed at creating such an environment should include a number of important measures.

The first is campaign-finance reform. Since Indonesia became a democracy in 1999, a large number of new political parties have been created. These, of course, have legitimate financing needs for their election campaigns. But, the very high cost of campaign finance in such a large and populous country as Indonesia often leads to corruption.

Reform should aim to partially level the playing field. Practical measures could include partial budgetary funding for campaign finance; reducing the costs of party politics by allocating free time slots on state TV and radio, with no additional time allowed; prohibiting the use of state resources for political purposes; requiring the contending parties to have their funds audited; ensuring that the public service is neutral during elections; and ensuring the independence of the General Election Commission.

Second, the institutions responsible for upholding accountability must be strengthened. Five key institutions dominate the accountability-monitoring landscape in Indonesia: the General Election Commission, which helps the people choose their representatives in the national and regional governments and parliaments; Bank Indonesia, Indonesia’s central bank, which guards the country’s financial health; the Supreme Audit Agency; the Supreme Court; and the Constitutional Court.

The Indonesian government and parliament should act to strengthen these institutions and make them truly independent. Adequate and transparent funding, preferably through the Ministry of Finance, is important. Ensuring that these institutions are headed and staffed by individuals of integrity is also crucial. The autonomy of these institutions needs to be protected, including by a free press.

Third, public services must be adequately funded. One significant factor driving corruption is the failure of the government’s budget to adequately fund its activities, and the tacit tolerance of a wide range of practices intended to overcome the insufficiency of budgetary funds. Blurring the distinction between public and private funding, and reducing the accountability of public money, creates a culture of corruption which has the potential to threaten Indonesia’s young democracy. This problem cannot be solved overnight, but a consistent, ongoing approach is required.

Fourth, the government needs to simplify the existing maze of overlapping and contradictory regulations. It is crucial that fewer better-drafted regulations that focus on achieving medium- to long-term outcomes replace regulations that are deliberately framed to facilitate corruptive practices. A practice should be adopted of providing the parliament with the draft regulations together with every draft bill submitted for enactment. This would see regulations reviewed for their consistency with the law, and thus ensure that the purpose of the law is achieved.

Fifth, the system of impunity must be reviewed. Previously, corruption flourished in Indonesia because there was little likelihood of being caught. But since the Corruption Eradication Commission was established in 2003, many individuals involved in corruption have been convicted and jailed. Unfortunately, the deterrent effect of these convictions has been considerably softened, as many of the convicted persons have been granted remissions (court-granted reductions to prison terms).

Finally, accountability cannot be ensured without transparency. The prevailing bureaucratic culture of secrecy creates a veil behind which corruption flourishes. That veil needs to be removed as Indonesia proceeds along the path of democratisation. While the process has opened up greatly due to civil society pressures and a free press, systematic efforts are required to ensure policies, draft laws, and regulations are incorporated as standard operating procedures in all government ministries and agencies.

A law that enshrines and guarantees transparency, along with the other measures discussed above, is necessary for anti-corruption reform to be successful in Indonesia.
Thee Kian Wie is Senior Economist at the Economic Research Centre, Indonesian Institute of Sciences.