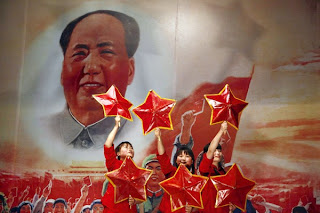 Chinese leaders' repeated calls for the PLA to be ready to plan, fight, and win wars is an ominous sign

“We will show the courage to try and resolve our differences with other nations peacefully—not because we are naïve about the dangers we face, but because engagement can more durably lift suspicion and fear,” President Obama said in his second inaugural address.

How exactly does the international community “engage” hostile states?  Take China, for instance.
Xi Jinping, named Communist Party general secretary in November, reflects a new militancy.  On Tuesday, he delivered a hard-edged speech to the Politburo in which he effectively ruled out compromise on territorial and security issues.  His tough words were in keeping with the ever-more strident tones of his messages to the People’s Liberation Army about being ready to plan, fight, and win wars. Chinese leaders have traditionally addressed the army and urged improvement in general readiness, but, as veteran China watcher Willy Lam notes, Xi has put a special emphasis on it.  Moreover, his calls on preparing for conflict go well beyond those of his two predecessors, Jiang Zemin and Hu Jintao.

In the past, the military’s war talk contrasted with soothing words from senior civilian leaders.  Now, with Xi, the aggressive comments from flag officers are consistent with what he, as top leader, is saying.  Worse, as the Financial Times notes, Xi’s words of war are now “being bundled” with his rhetoric, which seems calculated to “fan nationalism.”

In this environment, Chinese military officers can get away with advocating “short, sharp wars” and talking about the need to “strike first.”  Their boldness suggests, as some privately say, that General Secretary Xi is associating with generals and admirals who think war with the U.S. might be a good idea.

China looks like it is taking one of its periodic wrong turns.  Is it because Xi Jinping is a nationalist who wants to lead the country down a path of high profile force projection?  Or is he succumbing to pressures from elements inside a regime increasingly in disarray?

Most analysts think the People’s Army remains firmly under the control of Beijing’s civilian leaders.  Sources, for instance, are increasingly reporting that General Secretary Xi is personally directing Beijing’s provocative intrusions into Japanese water and airspace.  Moreover, Rand’s Scott Harold perceptively notes that Beijing’s civilian leaders can turn off the tough talk from military hawks when it is important for the Party to present a peaceful front, such as when Hu Jintao visited the U.S. in 2011.  “All of a sudden, bam, these guys got turned off,” Harold told Reuters, referring to the more talkative officers.

Nonetheless, there are increasing signs of a military breaking free of civilian control.  Last year, there were two sets of coup rumors that circulated around China, one in January and the other in March.  The stories may not be true, but that’s almost beside the point.  These rumors went viral in China not only because they were sensational but also because, for many Chinese citizens, they were credible.  They were credible because top leaders had conditioned the Chinese people over the last several years to believe the top brass had assumed a central role in Beijing politics.