Why does Australia continue to provide aid to Indonesia now its economy exceeds that of Australia’s? (Indonesia’s GDP is now One Trillion Dollars annually) 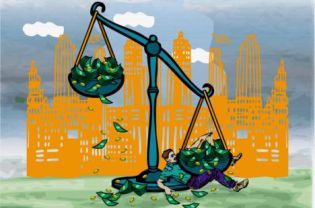 Indonesia is the largest recipient of Australian aid, and Australia is the fourth-largest donor of foreign aid to Indonesia.

Recent AusAID programs have included funding for the construction and improvement of Islamic schools, a roads improvement project for eastern Indonesia, and the Indonesia Infrastructure Initiative, designed to improve water, sanitation, and transport infrastructure.

A report by the Australian National Audit Office into Australia's infrastructure programs found that although effective, they lacked explicit strategies for engagement in the sector, and did not effectively manage key risks, contributing to delays in the program's implementation.

Aside from humanitarian efforts to combat poverty and rebuild the tsunami-affected areas, development programs also include economic reforms and political governance in supporting anti-corruption measures in the parliamentary and electoral institutions and also in the financial sectors.

Considering Indonesia’s lack of interest in assisting curtail the tens of thousands of boat people who fly into Indonesia and then, assisted by corrupt local officials, sail to Australia, then this Aid should be discontinued.