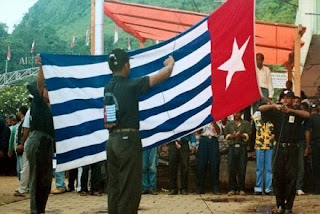 Saturday, July 6, is the 15th anniversary of one of the worst massacres in Indonesia's post-Suharto history. On that day in 1998, members of the Indonesian military ruthlessly gunned down peaceful pro-independence demonstrators on the island Biak in West Papua. Like so many massacres in Indonesia, the exact number of those killed is unknown.

The East Timor and Indonesia Action Network (ETAN) and the West Papua Advocacy Team (WPAT) today urge the U.S. government to publicly press the Indonesian government to acknowledge the Biak massacre and take the necessary steps to bring those responsible to justice. We regard it as unconscionable that the U.S. is proceeding to expand its ties with an Indonesian military that continues to violate human rights and remains unaccountable for massacres in Biak, East Timor, Aceh and elsewhere.
On July 6, 1998, hundreds of peaceful demonstrators gathered on a prominent hill in the town of Biak were deliberately attacked by members of the Indonesian military and police. The Papuans in Biak were asserting their right to self-determination after more than three decades of Indonesian military occupation of West Papua. The slaughter began with a dawn raid on a peaceful encampment by the town's water tower as many of the protesters slept or prayed. After the shooting stopped, the dead, dying, and wounded were loaded onto trucks and driven to the nearby naval base. Surviving Papuans were tortured and then loaded aboard Indonesian naval vessels and dumped into the ocean. Women were raped aboard the ships. Many of the victims had their hands bound or were stabbed before being thrown into the sea. Bodies of the victims washed up on Biak's shores during the following weeks.

At the time, the new, nominally democratic government of Indonesia disingenuously denied the massacre had taken place, contending the bodies washing ashore were victims of a tsunami that had struck Papua New Guinea more than hundreds of miles to the east.

No government of Indonesia has acknowledged the massacre or held the perpetrators accountable. The government continues to discourage investigation of this and other human rights crimes in West Papua by limiting access to the territory by foreign journalists, independent researchers, as well as UN and other international officials.
ETAN and WPAT extend our sympathy to the families of this victims of the Biak Massacre and to the West Papuan people in general who have suffered under Indonesian military repression for decades.

ETAN, formed in 1991, advocates for democracy, justice and human rights for Timor-Leste, West Papua and Indonesia. ETAN on the web: http://www.etan.org. Twitter: etan009. The West Papua Advocacy Team is a U.S.-based NGO composed of academics, human rights defenders and a retired U.S. diplomat.

Three WPAT members - U.S. embassy official Ed McWilliams, anthropologist Eben Kirksey, and journalist Octo Mote - were in Biak in July 1998 and witnessed the aftermath of the massacre. The two groups also oppose continued and expanded military-to-military cooperation with the Indonesia, including with the Indonesian Navy. McWilliams account of the Biak Massacre is here. Mote's recent video testimony is here. Kirksey's account is excerpted here.

For additional background on the Biak Massacre see http://www.biak-tribunal.org/. This is the website of The Citizens Tribunal for the 15th Anniversary of the Biak Massacre to be held on Saturday, July 6 at the University of Sydney.
-end-
John M. Miller, National Coordinator
East Timor & Indonesia Action Network (ETAN)
Mobile phone: +1-917-690-4391
Email: etan@etan.org Skype: john.m.miller
Twitter: @etan009  Website: www.etan.org

2012 Recipient of the Order of Timor (Ordem Timor)