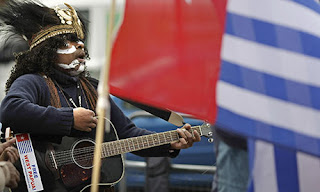 One voice … West Papua's demand for greater independence from Indonesia has not gone unheard by other Melanesian states. Photograph: Shaun Curry/Getty

A diplomatic whirlwind around efforts by West Papuans to gain international recognition for self-determination is gaining intensity after an application by an umbrella organisation for political and tribal groups in Indonesia's eastern region, the West Papua National Coalition for Liberation, to join the Pacific Islands region's power bloc, known as the Melanesian Spearhead Group (MSG).

The membership bid was widely anticipated before a recent MSG leaders' summit in Noumea, the capital city of the French special collectivity of New Caledonia. A decision on the matter by the group's five members – Papua New Guinea, Fiji, Solomon Islands, Vanuatu and New Caledonia's indigenous Kanak and Socialist Liberation Front – has been deferred while they look to engage more closely with Jakarta on the issue of human rights abuses in heavily militarised Papua and West Papua provinces. For decades, Indonesia has restricted access to the Papua region. But it is becoming impossible to keep a lid on the catalogue of events there. Violence, torture and extrajudicial killings are all part of the region's recent narrative.

The International Coalition for Papua of civil society and faith-based organisations notes a high level of violence where the perpetrators – said to be mainly Indonesian security forces – have widespread impunity.

"We are aware of the atrocities and human rights violations being committed against West Papuans in their homeland," said Vanuatu's prime minister, Moana Carcasses, at the June summit. He warned that history would judge the MSG members poorly if they failed to act decisively on West Papua.

Carcasses's call to action was echoed by his Solomon Islands counterpart, Gordon Darcy Lilo. "We can provide a platform for dialogue between West Papua and Indonesia," said Lilo, who advocates "an approach that considers consultations and dialogue with both Indonesia and West Papuans [to] allow for responsible and managed progress towards self-determination".

Such statements are a significant departure. Although the MSG was created in the 1980s with the aim of breaking the colonial shackles for all Melanesians, West Papua has until now been kept off the agenda, mainly at Papua New Guinea's behest.

The plight of the Melanesians on the other side of the porous 760km border that divides New Guinea has long been a sensitive issue for Papua New Guinea. Over the years, it has struggled to contain the thousands of West Papuans fleeing the Indonesian military, and has battled with the cross-border movement of arms and contraband.

In Papua New Guinea, public anguish runs deep about the treatment of neighbouring West Papuans. The International Coalition for Papua reports that the indigenous people experience a much lower level of security and protection of their right to life compared with other residents of Indonesia's Papua.

While the West Papua National Coalition for Liberation was busy lobbying support from Melanesian governments, Indonesian lobbying against the membership bid has applied a full range of economic and diplomatic pressure on Papua New Guinea in particular, says Richard Chauvel from the School of Social Sciences at Melbourne's Victoria University.

"The PNG government clearly has an interest in maintaining the security of that border," says Chauvel, "and PNG military forces are dwarfed by the Indonesian security forces stationed in West Papua."

By far the biggest member of the Melanesian group, resource-rich Papua New Guinea wields a major influence. Last month it agreed with Indonesia on a range of joint border projects such as gas exploration, highway construction and hydropower. Papua New Guinea's prime minister, Peter O'Neill, missed this year's Melanesian summit, opting instead for a state visit to Jakarta with a large business delegation. This was seen by some as reaffirming its support for Indonesian control of West Papua.

Fiji, too, has strengthened economic and military ties with Indonesia, while turning away from traditional partners Australia and New Zealand. The leader of Fiji's military regime, Commodore Frank Bainimarama, was instrumental in securing an invitation for a Melanesian group's mission to Indonesia later this year to discuss West Papua.

He is less keen on the WPNCL's application than his counterparts in Vanuatu and Solomon Islands. MSG leaders say they will decide on the membership bid pending the mission's outcome.
"Fiji wants to play on the bigger stage, engage with major Asian powers," says Fijian academic Brij Lal, of the Australian National University's School of Culture, History and Language. "But siding with Indonesia on the West Papua issue muddies the situation and undermines the regional solidarity required on issues of regional security and peace."

The WPNCL's secretary general, Rex Rumakiek, says what is important is that their struggle has been internationalised. "They are now visually recognising the issue and collectively want to do something about it."

A specialist in Papua affairs, Chauvel says the MSG is significant in the context of West Papua's long struggle. "Almost all other groups within the broader pro-independence movement feel that the only way to get the Indonesian government to talk to them is through international pressure."
Indonesia recognises the importance of consolidating ties with Melanesia. It controversially achieved observer status in the Melanesian group two years ago under Fiji's chairmanship. As Indonesia's vice-minister for foreign affairs, Wisnu Wardhana, told the summit, trade between MSG countries and his country amounted to $320m in 2012 and is on the rise.

The mood in the Pacific region for decolonisation should not be underestimated. The new chair of the MSG is the Kanak and Socialist Liberation Front, which received reinvigorated support from the independent Melanesian states for its own self-determination campaign. The timing is important as the Noumea Accord enters its final phase. The accord, which dates to 1998, provides for a potential transferral of political power to New Caledonia subject to a referendum to be held between 2014 and 2019.

Other Pacific states are seeking consolidated support for similar causes. Among the special guests at the Melanesian summit was French Polynesia's former president, Oscar Temaru, who, in May, within hours of losing the election to the pro-France veteran Gaston Flosse, succeeded in getting the territory reinstated on the UN decolonisation list. This list provides non-self-governing territories with UN oversight and help in a process towards an act of self-determination.

Solomon Islands sponsored the UN resolution, playing a key role in its success by galvanising support from the Melanesia network. This brings the number of Pacific territories on the UN list to six, from a total 17.

There's still a long way to go. "Remnants of colonial times are still trying to scare our peoples and convince us that we are not fit to manage our own destinies together," said Temaru. "We have huge resources and potential that are coveted by big sharks that roam our oceans."

The Melanesian leaders say they must show resolve to withstand pressure from big countries on issues of self-determination. On the West Papua question particularly, the MSG must also manage its own internal divisions. The push for freedom by the people of the Pacific is growing, but the movement needs united support from Melanesia to stand a chance.
“The Guardian”