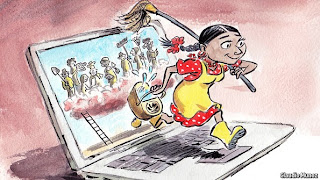 ONE of my favourite places to eat in Hong Kong is The Monogamous Chinese. Offering an unusual mix of Beijing and Sichuanese cuisine, it is named after Hongzhi (弘治), the first Chinese emperor to remain faithful to one wife. At some point after the fall of the Qing dynasty, marital fidelity became the norm in China* as it was elsewhere. But China's marriage patterns remain distinctive in other ways. I am still waiting for a rival restaurant to call itself The Hypergamous Chinese in reference to the widespread tendency of Chinese women to marry up

This habit of hypergamy (ie, marrying a person of higher social station) is documented in a recent Master's thesis by Yue Qian, a PhD candidate at Ohio State University. Although most Chinese newlyweds, like couples everywhere else, are of similar age and education, it is quite common for Chinese women to marry men who are better educated than themselves. As a corollary, men often marry women who are less educated. According to Yue Qian's calculations, 55% of university-educated Chinese men marry a less educated spouse, whereas only 32% of university-educated women do the same. 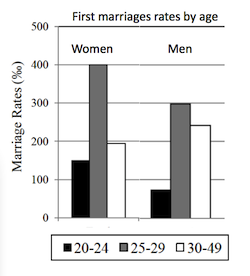 One well-educated woman, quoted by Mary Kay Magistad in a piece for Public Radio International, explains the equilibrium that results:

Hypergamy is one social habit that skews China's marriage market. Misogyny is another. Men famously outnumber women in China, thanks largely to sex-selective abortion. The skewed sex ratio should work in women's favour, raising their bargaining power in the marriage market. In this week's issue of The Economist we discuss some of the lengths that Chinese men will go to in order to attract a bride.

Buying property is one popular way for a man to distinguish himself. A man's ability to provide a home is something that three-quarters of potential brides consider before taking his hand, according to a 2012 survey of young people in some of China's big cities by Horizon Research & Consultancy group, a market-research firm. As a result, the skewed marriage market may also be skewing China's property market. According to a widely-cited study by Shang-Jin Wei of Columbia University, Xiaobo Zhang of IFPRI and Yin Liu of Tsinghua University, the increase in China's sex ratio, and thus the heightened competition for brides, can explain up to 48% of the rise in urban home prices from 2003 to 2009.

But although numbers are on Chinese women's side, time is not. Women's marriage rates drop steeply after they turn 30 (see the chart below adapted from Yue Qian's thesis), something that is much less true for men. One explanation for this is hypergamy of a different kind: older husbands often take younger wives, but older women rarely marry younger men. The odds of a man marrying a younger spouse are almost 50 times as high as the odds of a woman doing so, according to Yue Qian. This "age hypergamy" has uneven effects on women's marital prospects. It improves the chances of younger women even further: they have plenty of men their own age to go around and they can also marry older men as well. But it hurts the chances of older women, who must compete with younger rivals for men their own age.

The upshot is that first marriage rates for young women are much higher than for young men. But unmarried women in their thirties are less likely to marry than thirtysomething men, despite being outnumbered by them (see chart). Women, especially "A-quality" women, who do not marry early often do not marry at all. Indeed, women over 30 who boast a university education have even lower marriages rates than poorly educated, similarly aged men who lack a high-school education.

This "marriage squeeze" impels women to try to marry before they turn 27. The pressure to do so is far greater than the pressure men feel to provide a home, argues Leta Hong Fincher, a PhD student at Tsinghua University. Eventually, the compulsion to marry early outweighs the wish to marry well.

This is some consolation for bachelors struggling in China's unforgiving property market. Ms Hong Fincher once heard someone offer the following piece of candid, albeit cold, advice to young men under pressure from their girlfriend's mother to buy her a home.

As soon as the daughter turns 26, she enters a time of crisis. By the time the daughter turns 28, this feeling turns to fear and dread. So all you have to do is put off the marriage until your girlfriend reaches age 27 or 28, then your zhang mu niang [mother-in-law] won’t be worried anymore.

* Lisa Tran of California State University, Fullerton writes that the Republican period (1911-49) "witnessed the transition from a marriage system in which a married man could have any number of extramarital sexual liaisons with impunity to one in which men were expected to remain faithful to their wives." The Economist