Beyond the Refugee boats lies the rising regional power of Indonesia 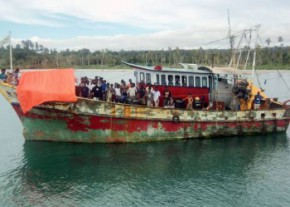 There was bafflement in Jakarta about what Australia’s Rudd intended when he suggested that the Coalition’s plan to turn back asylum-seeker boats might cause military conflict with Indonesia, raising the 1960s-era Konfrontasi campaign

The confusion underlines how we will have to change the way we deal with Indonesia if we are to have an effective relationship.

Rudd’s link with the historical Konfrontasi – when Australia joined British and Malaysian troops to stop Indonesian military incursions into newly independent Malaysia — is not obvious.

But the mention will have an effect. Indonesian culture is heavy with double meanings and elliptical and indirect messaging. Some in the country are bound to draw convoluted conclusions about what Rudd, who visited Jakarta earlier this month, meant; perhaps even an indirect threat to enter Indonesian waters to return asylum boats.

Indonesia’s systems of governance do not support quick decisions on complicated matters. Authority is decentralised and has been for centuries. Indonesia has 34 provinces — three with more than 30 million people and six with more than 7 million.

Agreement with an Indonesian government to manage people-smugglers will require a long and protracted process of consultation. It should be led by a minister supported by a specific inter-agency body.

Any government which promises a quick solution with Indonesia on people-smuggling is simply asking for trouble.

We really didn’t need the Gillard government’s Asian Century Strategy to tell us China was a big and growing economy. It has been the giant of Asia for a millennium. But at least the exercise drew attention to the importance of Indonesia. The federal opposition says Indonesia will be their top diplomatic priority if they form government. They are right.

Indonesia is set to present Australia with an entirely new regional picture: a militarily powerful neighbour straddling important northern sea lanes. In 2011, Indonesia’s GDP was about US$860 billion; Australia’s about US$1.3 trillion.

If Indonesia’s economy continues to expand twice the rate of Australia’s (which has been the pattern of the past 20 years) Indonesia’s GDP will be bigger than Australia’s in two decades. It will have as much to spend on defence equipment as Australia does now.

To build a constructive and mutually beneficial relationship with Indonesia, two key things need to be understood. First, Indonesia has “big-country syndrome”. Second, we need to shape our policy of engagement around common interest, not what we think is best for Indonesia.

We should not believe Australia ranks highly in the consciousness of Indonesian people or government officials. For Indonesia, the ASEAN grouping, China, the US and Mecca rank more highly; Malaysia and Singapore figure when Indonesian maids and guest workers are maltreated there.

Nor should we think Indonesians have long memories. As Greg Moriarty, Australia’s ambassador in Jakarta pointed out to an Asia Link audience in Melbourne last year, Indonesia has a rapidly growing and young population. Australia cannot afford to assume that building government-to-government links, as important as they are, will be enough.

The reality is that government in Indonesia has less influence over what happens than in most countries, and certainly over the thinking of a young and rapidly growing population.

While Indonesia is now one of the world’s biggest democracies, rule of law is inconstant. There are Australian businessmen in Indonesia now under arrest because they fell foul of their business partners. This is the business environment. Success depends on getting along with business. It will be the same with diplomacy. Riding with the hiccups will be part of the process.

Australia has to base its relationship with Indonesia on common interest, not what has become the view among Western governments about how poorer countries should develop. OECD aid donors now direct aid to root out corruption, strengthen rule of law, improve human rights, improve gender balance, increase environmental protection and make societies more equal. But they don’t have large developing countries as neighbours. Yet these goals now also influence Australia’s aid agenda.

Some have called for Australia to cut its aid unless Jakarta collaborates in stopping the boats. Nothing could better demonstrate to Indonesians that aid is being used to advance Australian interests, not Indonesia’s people. The response, anyway, in Jakarta would be “as you wish”.

Indonesia has already had a taste of Australian trade policy being used for political ends. Following pressure from activists, live cattle exports were banned, and costly import barriers were imposed to prove that imported timber products from Indonesia and other developing countries were legal.

Despite expert advice these measures would not work and cause resentment in Jakarta, Canberra let the activists have their way. There is no way we can work collaboratively on people-smuggling while that remains the case.
Alan Loxley London principal of public policy consultancy ITS Global.