Rhetoric and reality of the US rebalance 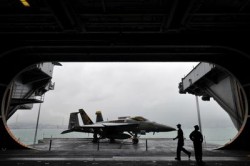 A week of meetings in Taipei recently revealed real confusion and marked disagreements about the meaning and content of the US ‘rebalance’ to Asia. Significantly, the divisions were most evident among the Americans visiting Taiwan, not the Taiwanese. Parsing the differences reveals a critical feature of US thinking about Asia that will bedevil American representatives no matter what they say: most observers, American or not, see Asia as a cockpit of competition, a struggle for supremacy, between the United States and China

Every discussion about the rebalance pivoted on two concerns. First, is the United States genuinely committed to this policy and will it be sustained in the face of tight budgets and crises elsewhere in the world? Second, is the rebalance really designed to contain China and check its rise? The answer to the first is an unequivocal yes; the second, an equally strident no.

In both cases, time will tell, but logic supports each answer. The rebalance reflects enduring national interests and changing geopolitics. It is an attempt to more tightly couple the United States to the most dynamic region in the world. US ties to Asia have to be maintained, a position that makes even more sense given the 200-plus years of US engagement with Asia.

Meanwhile, the United States has worked with China for more than three decades, and has been instrumental in providing the capital, trade and knowhow that has enabled China’s rise. The United States seeks to cooperate with China across a range of endeavors. Its primary goal is the facilitation of Beijing’s contribution to the maintenance of global order. By no definition does hundreds of billions of dollars of investment and trade, and ongoing diplomatic and military engagement across a range of institutions and endeavors, constitute containment.

The common argument that Washington’s real goal is to check China’s rise and protect its regional supremacy just doesn’t accord with reality. That judgment reflects not naive faith in benign US intentions but the content of almost every speech by US officials about the rebalance and US policy since it was first articulated, conversations with policymakers throughout the US foreign policy bureaucracy, and the implementation of that policy over the last two years. Moreover, a policy of outright confrontation would undermine US objectives by antagonising regional countries that don’t wish to be forced to choose between Beijing or Washington and by antagonising Beijing.

It is commonplace to insist that any uncertainty about US policy toward Asia reflects poor communications by American officials. That’s not right. The message could not be clearer. Instead, the problem is the realist straitjacket that dominates thinking about foreign policy in both the United States and China. (And, yes, Chinese realists are as numerous and as fervent as their American counterparts.)

Curiously, I heard a good counter to that thinking in Taipei, of all places. For the first time in many years, conversations there were dominated not by the military balance but the opportunities afforded by Taiwan’s energetic new economic diplomacy. Taiwanese were abuzz over the signing of a new economic partnership agreement with New Zealand, Taiwan’s first such deal with a developed economy. That pact is intended to open the door to more such agreements. Sure enough, Taipei is in the last stages of concluding a similar deal with Singapore and the government has said that it is negotiating free-trade agreements with India and Indonesia, and has started a feasibility study on a pact with the Philippines.

Some dismiss the deals as window dressing, too small to make much difference. Supporters counter that their real significance is symbolic: these agreements help reintegrate Taiwan into the global economy and remind the world of its presence and potential. They help counter the view that the reunification of China and Taiwan on Chinese terms is inevitable. Indeed, as Taiwanese surveyed the cross-strait relationship, I was told that both sides believe time is on their side. That was a first. In the past, the prevailing line has been that it was only a matter of time before China swallowed Taiwan, either by force or a diplomatic and economic panda hug. Many Taiwanese now believe that they have options and that the rest of the world will see them as a distinct entity, not a mere appendage or ‘rogue province’ of China.

This thinking parallels that of the US ‘rebalance’. Washington has insisted that this policy is first diplomatic, then economic and only finally military. That does not mean that the United States is merely intensifying competition with China on other levels. Rather, the United States is focusing on the ‘economic shelf’ in the toolbox of national assets. Taiwan has embraced this logic and it is showing dividends, using economic deals to create diplomatic elbow room. There is no reason the United States cannot be equally successful using economic diplomacy to exercise power and influence throughout Asia.