Cambodia on the road to civil war 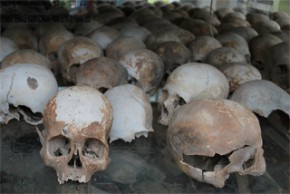 As a survivor of the Khmer Rouge's "Killing Fields", I should not say that Cambodia needs another war, not even if I am heavily sedated. But the pre-election reality on the ground is pushing the country in that direction.

The totally antagonistic standpoints of the ruling Cambodia People's Party (CPP) and the opposition Cambodia National Rescue Party (CNRP) are evident on the campaign trail. In short, where the CPP sees white, the CNRP sees black.

When the CPP says they are Khmer, voted in by Khmers and working for Khmers, the CNRP says that all of the CPP's leadership and their supporters are Yuon (Vietnamese) that they work for Yuon, and are under the still firm control of the Yuons. The politically potent charges stem from Hanoi's installment of Hun Sen as deputy prime minister and foreign minister, and later as national leader, after Vietnam's invasion and takeover of Cambodia in 1979.

Now, when Hun Sen's CPP-dominated government works on the demarcation of Cambodian-Vietnamese borders - moves he claims are meant to preserve Cambodia's territory from foreign encroachment or even being completely subsumed by its larger neighbor - the CNRP says that the government is in reality ceding territory to Hun Sen's old communist allies in Vietnam.

They point in particular to Kampuchea Krom (South Vietnam), where over 10 million ethnic Khmers currently reside, and the Koh Tral island that faces Cambodia's Kep beach resort in southern Kampot province. In fact, both were ceded to Vietnam by French president Vincent Auriol on June 4, 1949 at the peak of the colonial French Protectorate era that expanded across the so-called Indochina peninsula.

On the other hand, the CPP likes to portray itself protector of the nation and the CNRP as a national destroyer. Since the first post-civil war democratic elections held in May 1993, successive CPP-led governments have worked with growing success at attracting foreign investment, building key infrastructure such as roads, bridges, schools, hospitals, pagodas, dams, dikes, promoting fast economic growth and consolidating political stability.

The CNRP-led political opposition, led by former finance minister Sam Rainsy, has only grudgingly acknowledged these accomplishments and has remained focused on the CPP's many shortcomings, including its poor rights record and the yawning inequality that has accompanied fast economic growth. The opposition seems bent on political revenge should it win the election.

Some in the CPP fear an CNRP-led government would aim to rebuild Cambodia from scratch, similar to the Pol Pot-led Khmer Rouge regime's "Year Zero" campaign stretching from 1975 to 1979. Hun Sen has indicated he would not leave office even if defeated, while his party stalwarts have warned that an opposition win would lead to civil war or a military coup.

Cambodia's thousands-strong community of non-governmental organizations (NGOs) have almost universally pledged allegiance to the CNRP and some have even sworn to sacrifice their own lives for the opposition if need be. They are, in fact, an extremely dangerous UXO (unexploded ordnance) planted in Cambodia by the West in general and by the United States of America in particular, to destabilize and destroy the CPP once and for all whenever the opportunity arises.

For instance, CNRP vice president Kem Sokha, a potential prime minister if the opposition wins the election, led the USAID, British Foreign and Commonwealth Office and European Commission-funded Cambodian Centre for Human Rights before entering mainstream politics in 2008. He has since been frequently accused by CPP surrogates of serving as a stooge for Western interests.

The CPP argues it has a proven track record of fighting and defeating the Khmer Rouge, rebuilding and developing war-torn areas, and promoting national reconciliation, stability and peace. The CNRP, CPP surrogates argue, is working for nothing more than the hidden personal agendas of their leaders.

That, they say, includes CNRP leader Sam Rainsy's desire to avenge the mysterious death of his father, Sam Sary, and Kem Sokha's ambition to become prime minister to build his own personal legacy and status out of nothing. CPP-aligned media chose to ignore Sam Rainsy's triumphant return from exile under a royal pardon in the week before the polls, despite the crowds of supporters who thronged his public appearances. (He had been barred by the National Election Committee from contesting the polls.)

As long as the CNRP is run by Sam Rainsy, the biological son of the same Sam Sary who allegedly plotted with the US Central Intelligence Agency to kill then Prince Norodom Sihanouk in 1959, and Kem Sokha, a rights defender-cum-politician who has consistently used the country's poor and desperate for his own political ends, the risk of renewed conflict will remain in Cambodia.

While Cambodia's people prepare to cast their ballots this weekend, it is not inconceivable that the democratic process will lead to a new civil war.

Savath Pou is based in Sydney, Australia. Courtesy Joyo News