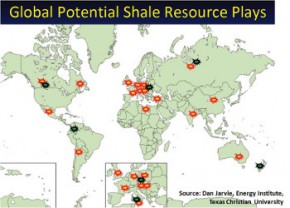 Changing the energy and political map of the world

The so-called Shale Revolution, in which United States producers developed new drilling technologies for recovering gas and oil trapped in vast shale beds in the country's mountain states, is changing the geopolitical and economic map of the world and certainly Asia.

In particular, according to a study by Research Fellow Lee Dae-sik and reprinted by the Samsung Economic Research Institute in Seoul, the shale revolution is threatening Russia's global status. With Russia depending on energy exports to deliver half of its government revenue, the rising US production is cutting into both prices and exports, with Russia having to cut its 2013 gross domestic product growth rate from 4.6 percent to 2.4 percent last April.

Although Malaysia, for instance, has a more diversified economy, the country still derives 40 percent of government revenues from oil and gas and provides heavy subsidies to consumers for gasoline, as does Indonesia, another resource-heavy exporter. Korea, China and Japan have a high reliance on oil from the Mideast: Korea 85 percent, China 51 percent and Japan 82 percent. As a result, they are paying the so-called "Asian premium" - US 1.00 to US$1.50 per barrel more than US prices. Abundant new supplies could change that.

China, one of the world's biggest energy importers, has the potential to become the world's largest shale gas producer, with reserves estimated to be larger than the US. There are plans to produce a yearly 60 billion to 80 billion cubic meters of shale gas from 2020.

Consequently, as China's long-time supplier, Russia has had to agree to the majority of China's demands in recent purchase negotiations of crude oil and natural gas. Russia has also reopened the once deadlocked talks over territorial disputes and is trying to persuade Japan to join a $50 billion project to construct a LNG plant in Vladivostok.

While Lee's research paper deals primarily with Russia, several countries across Southeast Asia face equally troubling implications. Malaysia is the world's second-largest exporter of liquefied natural gas after Qatar. Indonesia is third. Countries holding the largest proven gas reserves in 2011 were Australia, China, Indonesia, Malaysia and India. By end 2011, Indonesia was exporting more than 1 trillion cubic feet of LNG, or about nine percent of the world's LNG exports. It has been losing market share in recent years to LNG producers such as Qatar, Malaysia, Australia, and Algeria. 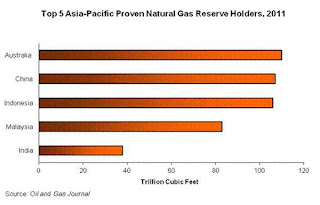 Armed with the new technologies to unlock shale gas and oil, the US overtook Russia to become the world's largest producer of natural gas. By 2020, the US, as has been widely reported, is expected to become the world's top crude producer as well. That, along with the dramatic growth in recoverables and unconventional energy sources, means that probably all of the traditional oil and gas producers are going to face falling prices and competition for sales.

Russia has been throwing its weight around, especially in Western Europe, for two decades on the strength of its oil and gas umbilicals to the west. Moscow can probably expect to see some of that influence diminish in addition to the loss of GDP from energy export, which has given the country the perverse luxury of not bothering to diversify its economy. Now the problems can be expected to come home to roost.

Another SERI study published recently, for instance, says that Canada, Mexico, Colombia, Argentina, China and Australia have all joined the US in focusing on tight oil exploration. Oil sands and extra-heavy oil are being targeted in Canada and Venezuela, which have more than 90 percent of the aggregate total. Shale gas and oil, are about to produce a multipolar energy world.

Despite the fact that the world is suddenly being flooded with vast amounts of fossil fuels at the same time major countries are suddenly getting serious about conservation, a drastic decline in oil prices cannot be expected. It costs more than US$70 to bring one barrel of unconventional and conventional oil to the surface. A plunge in oil prices would shrink profit margins, triggering a pullback in production. Thus, operating costs and supply controls will lay a solid floor on oil prices.

The world has long been on tenterhooks over unrest in the Middle East and nationalism from the Chavistas in Latin America. But today, that equation is changing, SERI points out. Asia and North America account for 51.5 percent of global oil consumption, but the regional oil supply share stands at just 22.4 percent. Asian countries have been providing 71.4 percent of their oil demand from outside the region and North America 38.4 percent. Regional oil supply and demand is extremely imbalanced and reliance on imported oil is very high.

But the Middle East will remain crucial, SERI argues. "The degree of Asian dependence on Mideast oil will be affected by Asian countries' bargaining leverage with Mideast producers and whether North America exports unconventional oil. If Asian countries' price bargaining power on Mideast increases to an extent that an Asia discount replaces the current price premium, reliance on Mideast could increase again,: the report notes. "Meanwhile, if North American unconventional oil supply flows to Asia, Asian reliance on Mideast oil can decline."

Certainly, as SERI points out, the shale revolution has put the brakes on Russia's Central Asian strategy to secure the Asian energy market. The US' production of shale oil and reduction of oil imports means that Middle Eastern oil producers have a surplus, which is finding its way to Asia. Furthermore, Korea has agreed to import 3.5 million tonnes of liquefied natural gas (LNG) from the US annually over a 20-year period, starting from 2017 and Japan a yearly 4.4 million tons. Meanwhile, in order to contain North America's newly attained energy leadership, the Organization of the Petroleum Exporting Countries (OPEC) and Gas Exporting Countries Forum (GECF), are planning to strengthen their alliance. Full-fledged efforts are being made to expand cooperation through such means as summit diplomacy with main oil sellers in the Middle East e.g. Saudi Arabia, the world's largest oil producing nation, to control oil supply.

And through cooperation with its global partners in resource development, Russia is trying to keep the shale revolution in check, according to the SERI report. In building up camaraderie, Russia has already accumulated much needed experience from teaming up with Eni, an Italian energy company, France's EdF and Germany's BASF among others to oppose the EU's regulations on constructing pipelines in Europe.