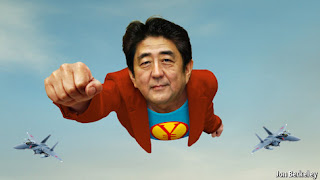 Japan’s security policy has taken a significant turn since the Liberal Democratic Party, headed by Shinzō Abe, won the lower house election in December 2012
There have been three notable changes. First, the government has departed from its policy of ‘appeasing’ China when Abe stated that, in response to the information the government received about the presence of eight Chinese vessels near the Senkaku Islands on 23 June, Japan would be prepared to use force.

Second, the government is working on rebuilding trust with the United States, which had weakened during the period of DPJ rule, and is receiving support from Washington on the Senkaku/Diaoyu territorial disputes. During a meeting between President Obama and Prime Minister Abe on 22 February, it was reported that Obama stated that it is China that ‘increases tension around the Senkaku Islands’. It should be noted that Obama used only the Japanese name (Senkaku), not the Chinese one (Diaoyu).

The Japanese Self-Defense Forces and US Army, Navy and Air Forces have also increased military cooperation. In June 2013 the allies held joint exercises in California, which included practicing the landing of the new MV-22 Osprey tiltrotor aircraft on Japanese destroyers. China urged the parties to suspend manoeuvres during the informal summit between Presidents Xi and Obama in California, but its request went unanswered.

Third, Japan’s security strategy toward China is moving away from a narrow focus on a potential military conflict around the Senkaku Islands toward a broader international context. Rather than viewing the Senkaku/Diaoyu dispute as a dispute between only Japan and China, Tokyo now sees the conflict in the East China Sea as being closely linked to the territorial disputes in the South China Sea and the wider issue concerning Beijing’s growing military ambitions.

This new direction is driving Tokyo to change its traditional approach to security challenges in East Asia. The changes to Japan’s security agenda can be separated into two limbs. On the one hand, it seems that Japan is prioritising its loyalty to the West, even at the expense of its other interests. A good example is Japan’s reaction to the crisis in Syria. Contrary to its earlier position, in which Japan had refrained from direct involvement in the conflict (a position prioritising the necessity to sustain fair relations with all major suppliers of oil), Tokyo announced in June its intention to start direct shipments of ‘humanitarian aid’ to the Syrian opposition. In fact, this decision resuscitated the tried-and-tested model of strategic cooperation between Japan and the West — the Western countries take care of the military side while Tokyo handles the humanitarian aspect. Japan’s contribution to the foreign policy of Western governments should also be assessed in the context of Tokyo’s interest in strengthening Western solidarity on a problem seen as much more pressing in Japan: a consolidated position on the North Korean nuclear program.

The other limb is that Tokyo is pursuing its own strategy of security networking in East Asia.
Abe’s ASEAN diplomacy — which includes Abe’s visit to ASEAN countries in February 2013, his declaration of Japan’s five principles of ASEAN diplomacy, and Japanese defence minister Itsunori Onodera’s visit to the Philippines in June — are seen by many as part of Abe’s long-term plan of forming an anti-China coalition in the region. Abe also introduced the idea of the ‘security diamond’ involving Japan, Australia, India and the US State of Hawaii to guarantee the security of sea-lanes in the Asia Pacific. And after taking back the prime ministership in December 2012 Abe invited the UK and France to actively participate in Asian security and put forward the idea that Japan should join the Five Power Defence Arrangements, which at present includes Britain, Malaysia, Singapore, Australia and New Zealand.

The changes to Japan’s security policy are making its Asian neighbours suspicious of Japan’s intentions. In order to dissolve these concerns, Abe is seeking to restore Japan’s reputation as a country committed to peace and stability, but his efforts have been seriously undermined by his personal nationalistic views ,  and the actions of his Cabinet members. There have been concerns that comments and actions on controversial historical issues by Abe and his Cabinet could upset regional relations, particularly in ways that could hurt US interests. To mitigate some of these concerns, Abe confirmed his Cabinet’s loyalty to the famous Murayama statement of 1995.

Defence minister Itsunori Onodera at the Shangri-La Dialogue in June stated that the idea of Japan abandoning its identity as a peace-loving country and ‘attempting to challenge the existing international order’ is a ‘total misperception’ and that the true goal of Japan is ‘to enable Japan to make a more proactive and creative contribution toward regional stability’. It is difficult to avoid the impression that the Japanese defence minister was commissioned with an unenviable mission of making excuses for the clumsy actions of his Cabinet.

Japan’s security policy has changed significantly since Abe took over the prime ministership in December 2012. But it seems that the Abe government’s new security strategy is damaging Japan’s image as a country committed to the ideals of peace in the eyes of its Asian neighbours.
Dmitry Streltsov is Head of the Department of Asian and African Studies, MGIMO University, Moscow.