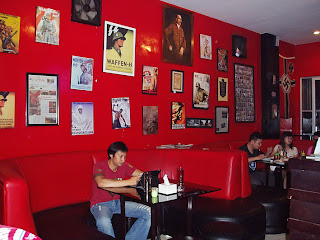 Henry Mulyana, foreground, operates the Soldatenkaffee in Bandung, which is decorated with Nazi paraphanelia and has staff dressed in costumes reminiscent of the SS. (JG Photo/Yuli Krisna)
Bandung/Jakarta. A restaurant in Bandung’s adoption of a Nazi theme has sparked debate on Indonesians’ seemingly relaxed attitude to offensive symbols, with sources of blame ranging from ignorance of history to a cultural tradition of jokes.

Soldatenkaffee has adorned its walls with Nazi-related memorabilia, including a large photograph of Adolf Hitler and a flag with the swastika symbol.

The waiters at the cafe dress in uniforms similar to those worn by officers of the Schutzstaffel (SS), the Nazi paramilitary. And in a nod to a classic Indonesian fried rice, the menu offers “Nazi goreng.”

Henry Mulyana, owner of Soldatenkaffee, said his decor had attracted many curious customers, both local and foreign, since the cafe’s opening in April 2011.

“I realized that displaying the Nazi symbol was going to spark some controversy, but I decided to go for it because I don’t feel I’m violating any laws,” Henry told Jakarta Globe over the weekend.

“Controversy will always exist, depending on from what side we’re looking from. The way I see it, the Nazis didn’t commit slaughter. War is crime, so there will always be acts of murder in a war.

“Even during the Dutch colonization of Indonesia, many Indonesians were killed. This is also the case with Americans and their bombing of Hiroshima. Why are the Nazis seen as bad guys while those belligerent nations are not?”

Henry claimed there was no proof the Nazis were responsible for the Holocaust, the genocide of about 6 million Jews during World War II. He also denied idolizing Hitler or the Nazi ideology.
“The only reason why I put up Hitler’s picture is because it completes the theme I’ve set for my business,” Henry said.

“I’m not personally familiar with the [Nazi] ideology, but even if I am, I don’t think I’d find it completely disagreeable. For example, communism in Indonesia was prohibited, but it’s flourishing in China. Maybe it’s just a matter of politics.”

Many Internet users have heavily criticized the restaurant’s choice of theme.

“A genocide has never been or would ever be a good joke, not even a source of giggles,” wrote a user in an online thread on a forum for expatriates living in Indonesia.

Despite the near-global recognition of the horror of the Holocaust, in Indonesia symbols associated with the event have been used in marketing, often with producers and consumers ignorant of the historical origins.

Some factory outlet stores and small clothing shops in Indonesia sell shirts with the swastika symbol.

Danang, a 20-something office worker in Central Jakarta, said that during his time as a school student he was not taught about racial conflicts in Indonesia or abroad.

“I don’t remember having learned anything in the classroom about interracial or interethnic relations in Indonesia,” Danang told the Jakarta Globe.

“We barely ever mention the fact that there is tension between different racial groups or religious groups during civics class or history class. Controversial issues like the riots of May 1998 and the Trisakti tragedy never came up. If it did, it was only mentioned in passing,” he said, referring to the violent events during the downfall of former strongman president Suharto.
“Teachers might bring it up in university if you major in political science, but my secondary school teachers definitely didn’t bring it up.”

I’m not personally familiar with the [Nazi] ideology, but even if I am, I don’t think I’d find it completely disagreeable.

Even though Indonesia consists of more than 300 ethnic groups speaking more than 700 languages, few of the nation’s more than 240 million people receive formal education about race relations.

Many Indonesians only encounter racial matters through stereotypes and jokes.
“Growing up, my parents used to use ethnic stereotypes around my siblings and me. Some of them were pretty funny, even though they were often borderline racist,” said Yudi, a marketing manager at a multinational firm in Jakarta.

“Every time my sister was taking her leisurely time in the bathroom, we would retort, ‘She’s only like a Solo princess when she’s getting ready, but don’t you dare disturb her, because she’ll turn into a Flores thug!’ ”
Sarlito Wirawan Sarwono, a professor of psychology at University of Indonesia, said the use of humor to discuss controversial topics was a positive trait.

“The usage of humor actually shows maturity. The conflict of racism definitely exists, but it is latent. So it’s often disguised as humor,” Sarlito said.

“In psychology, we call this phenomenon sublimation, which is something potentially threatening that is packaged as another form that is more acceptable. Another example is the conversion of one’s aggressive tendencies into a form of self-defense.”

Indonesians’ casual and jesting manner when talking about race can results in a tendency to disregard an inappropriate reference to the Nazis as a light-hearted joke.

With topics such as the conflict between Sunni and Shiite Muslims in East Java’s Madura Island dominating the news, it might seem that religious violence is more prominent than racial insensitivity.

But Sarlito said this was not the case.

The academic said racism existed in Indonesia before religious sectarianism. In Indonesia, one of the earliest large-scale conflicts was the slaughter of thousands of Chinese in Batavia, now Jakarta, in 1740.

Other interethnic clashes include the bloody Sampit conflict in 2001 between the native Dayak people and migrant Madurans in Central Kalimantan.

That many people still shrug off the use of the Nazis’ notoriety as a marketing tool suggests that racial and ethnic insensitivity remains ingrained in Indonesian culture.

Sarlito said a key way to change attitudes is for people to become more aware of history and society, both at home and abroad.

“If we want to increase sensitivity on racial issues, Indonesia needs to look back at history more often, keep reinforcing our Pancasila values and be aware of ideologies and values that can harm the unity of this nation.”

Ignorance of history is also apparent on the homefront. Many Indonesians are oblivious to the bloodshed that afflicted the nation during anti-communist violence in the 1960s, where more than a million people were reportedly killed but few perpetrators were brought to justice.
Jakarta Globe