Superpowers on a war footing 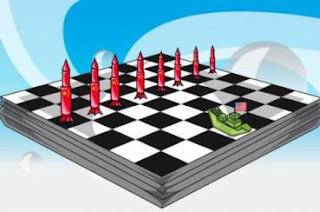 Doug Saunders of The Globe and Mail, Canada's leading newspaper, reported in its July 15 edition that the United States and China have been preparing for an all-out war

Both the Pentagon and the People's Liberation Army are building up their military strategies. It appears that a global war is in the making.

Saunders wrote that the Pentagon is proceeding with war preparations without oversight from the White House or Congress. This gives the impression that the Pentagon is operating as an independent state within the state. The Pentagon is relying on the AirSea Battle strategy, in which the US Army and Air Force will stand ready to support 320,000 military personnel in a simultaneous land and air attack against China in the event of a spillover war in the South China Sea or surrounding areas.

President Obama has spoken of a pivot to Asia, followed by the US Defence Department's plan to move most of the US naval capability to the Asia Pacific to counter the rise of China. We can feel that the US military, in spite of the turmoil in Syria, Egypt and the Middle East, is re-asserting its influence in the Asia-Pacific. The US and China are now engaging in a full-scale currency war. A physical war could be the inevitable course. A rise of China threatens the US dollar as the world's reserve currency and the US supremacy.

On China's side, we can assume that the Chinese leadership has ordered a full preparation for a war with the United States. China has secretly built up its military capability, with modern weapons and sophisticated technology. China said it is ready to develop an anti-AirSea Battle strategy. China's President Xi Jingping has urged the military to prepare for the war and to fight to win.

Japan is quick to sense this move. In a white paper issued recently, Japan sharply criticised China's military buildup. In its July 14 edition, DefenseNews reported that in the white paper, Japan accused China of "rapidly expanding and intensifying its maritime activities … engaging in dangerous acts that could give rise to an emergency situation" and attempting "to change the status quo by force, based on its own assertion", calling China's actions "incompatible with international law".

Reuters reported on January 17 that Chinese Air Force colonel Dai Xu, who is renowned for his regular calls to arms, came out to warn that the US should not risk a war with China over the South China Sea or China's territorial spats with Japan and other Asian nations.

"Since we have decided that the US is bluffing in the East China Sea, we should take this opportunity to respond to these empty provocations with something real," he was reported as writing in an article last year. "This includes Vietnam, the Philippines and Japan, who are the three running dogs of the United States in Asia," added Dai, a researcher at Beijing University's China Centre for Strategic Studies. "We only need to kill one, and it will immediately bring the others to heel."

If China were to go to war against the US, it would have to fight some neighbours too, as Dai has mentioned. For they have collaborated with the US in its strategy to encircle China. It is almost certain that China would have to strike Japan first, because doing so would also rally support from both North and South Korea. For this reason, Shinzo Abe's government is moving to amend the Japanese constitution to re-arm Japan. Japan realises that a day of reckoning is coming.

Southeast Asian nations would find it difficult to walk a delicate balance. Indonesia and Thailand have privately agreed to form a military alliance with the United States. The US would like to revive its use of the military base at U-tapao. This issue is likely to flare up again in Thailand as the situation develops. However, it is unwise for ASEAN leaders to take sides in the US-China confrontation. But Southeast Asia will inevitably be drawn into the conflict if the war happens. Prudence is necessary during this time of clear and present danger.
Thanong Khanthong
thanong@nationgroup.com July 19, 2013 1:00 am