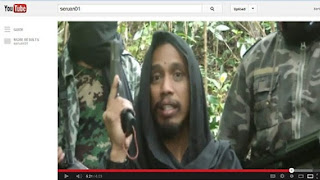 A screen grab of Abu Wardah Santoso in the YouTube video, which has now been taken down, was captured by the Jakarta Post.

JAKARTA, Indonesia –  Indonesian police are warning against public disorder following the online publication of a video of the country's most wanted militant calling on his followers to continue attacks on anti-terror officers.

Santoso is alleged to command eastern Indonesia mujahadeen. He is wanted for several attacks in Java and Poso in Central Sulawesi province, where a Muslim-Christian conflict killed at least 1,000 people from 1998 to 2002.

Recent terror attacks in Indonesia have targeted security forces and local "infidels" instead of Westerners.