A Win For West Papua In Melanesia 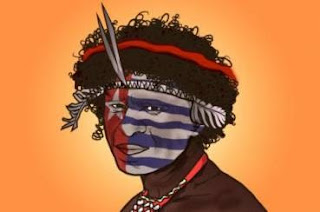 When the heads of government and distinguished persons from Melanesian nations gathered for the MSG annual meeting in late June, the most prominent item on the agenda was West Papua’s membership. It was the result of some 18 months work by John Otto Ondawame, Rex Rumakiek, Andy Ajamiseba and Paula Makabory, the coordinating group of the West Papua National Coalition of Liberation, a West Papuan umbrella group for resistance organisations inside and outside the country.

At the meeting, representatives of the Indonesian government (recently granted observer status by the MSG) publicly conceded that West Papua has become an international problem. This is extremely significant; for decades the Indonesian government has insisted that West Papua is an internal issue. Jakarta has repeatedly refused all offers of international assistance to resolve the longstanding conflict.

However, as noted by the West Papuan delegation, the Indonesian government is acutely aware that MSG members have successfully sponsored past pushes for decolonisation in Vanuatu, East Timor, Kanaky (New Caledonia) and now Ma’ohi Nui (French Polynesia which includes Tahiti).
In a formal statement, the Coordinating Political, Legal and Security Affairs Minister for the Indonesian Government, Djoko Suyanto invited MSG “foreign ministers to visit Indonesia to observe Indonesia’s development in general, which also includes the government’s policy on the acceleration of development in Papua and West Papua”. The senior minister said that President Susilo Bambang Yudhoyono had endorsed the plan.

The governments of the Melanesian states – Papua New Guinea, Vanuatu, Fiji, Solomon Islands, and the FLNKS (Front de Liberation Nationale Kanak et Socialiste, the National Socialist Liberation Front for Kanaky, a coalition of four pro-independence bodies) – will likely visit Indonesia in around six months, depending on negotiations with the Indonesian Government.
Collectively the MSG nations could force West Papua back onto the list of countries not yet decolonised, thereby making it the concern of the United Nations Decolonisation Committee. That they have invited five foreign governments to view the situation inside West Papua shows how worried they are.

All this makes the next six months very interesting indeed.

Some things we can predict with a high degree of probability. First, the Indonesian government will attempt to buy off Melanesian political leaders. With endemic corruption in many Melanesian countries, weak rule of law, varying degrees of media freedom and vested economic and political interests at stake, they may succeed. Certainly the Papuans will never be able to compete with Indonesian largesse.

Bainimarama’s military government already has a close relationship with the Indonesian government so he will be unlikely to rock the boat. Without a free press or democracy in Fiji it will be much harder for the Fijian people to insist that the Papuans should live their lives out from under the Indonesian jackboot.

Papua New Guinea is particularly vulnerable. Some Papua New Guinean politicians, notably Sir Michael Somare, are heavily invested in logging, palm oil plantations, and supermarket chains with the Indonesian government and military. Other PNG politicians will be worried about instability along the shared border with West Papua. The Indonesian military has repeatedly crossed over into Papuan New Guinean territory in hot pursuit of Papuan dissidents, including nonviolent activists seeking sanctuary. That could play into support for demilitarisation of West Papua, a position supported by some politicians in PNG.

The Solomon Islands are also vulnerable to Indonesian influence. Of all the Melanesian countries, the Solomons have the lowest level of awareness of the Indonesian government’s occupation of West Papua. They are the site of substantial Indonesian and Malaysian logging interests.

Having said that, it must be noted that Gordon D. Lilo, Prime Minister of the Solomon Islands, told members of the West Papua National Coalition for Liberation that “the West Papuan case is an incomplete decolonisation issue, it has been going on for too long; it must be resolved now”.
The Vanuatu government and the FLNKS will be much less responsive to Indonesian overtures. In Vanuatu last year the government was overturned largely over outrage at then Prime Minister Sato Kilman’s close relationship with the Indonesian government. The current Prime Minister, Moana Carcases Kalosil, is a strong supporter of West Papuan independence. The FLNKS also tie their own political fortunes to that of the West Papuan struggle for self-determination through a frame of Melanesian solidarity.

We can also guarantee that the Australian and New Zealand governments will wheel out their tired mantra that they “support the Indonesian government’s territorial integrity”. In an article in the June edition of The Monthly strategy doyen Hugh White recommended the Australian Government jettison any concerns for human rights over West Papua in favour of political and economic interests.

However, familiar tensions between the West Papuan resistance groups came out during the Noumea meeting. The main fault line, exposed by an article in the Island Business, was between the West Papua National Coalition for Liberation and the Federal Republic of West Papua, who both claim to be the true representatives of the Papuan people.

Both the National Coalition and the Federal Republic applied to become members of the MSG. Representatives of the National Coalition are based in Vanuatu with easy access to the MSG secretariat in Port Vila, but the leadership of the Federal Republic is in jail, sentenced to three years prison for a dignified and nonviolent declaration of independence on 19 October 2011. Dialogue between the two groups is understandably difficult.

When Forkorus Yaboisembut, the President of the Federal Republic of West Papua learnt of the National Coalition's application earlier this year, he wrote to the Director General of the MSG. In the letter, Yaboisembut graciously withdrew his application, saying:

“Rather we request the letter be seen only as a letter of support from West Papua for the application for [the National Coalition's] MSG membership and as a means of introducing the Federal Republic State of West Papua to MSG for future purposes.”

This, and the fact that for a short time in late 2010-2011 both groups were part of a shared decision making structure, shows that cooperation is not beyond the realm of possibility.
Papuans now have six months to get their house in order. This might involve a political coalition between resistance groups, as was the successful model in East Timor and Kanaky, or unification under a shared vision similar to the African National Congress' Freedom Charter.

When the foreign ministers from the Melanesian Spearhead Group do visit West Papua they will be accompanied by the international media - a victory for Papuans who have long demanded their country be opened up to foreign media.

If, on the other hand, the Indonesian government insists on keeping journalists out during the MSG visit, they will only reinforce international perceptions that they do in fact have something to hide.

Either way, the Papuans, like the East Timorese before them who mobilised when Pope John Paul II visited in 1989, will seize this opportunity to register their cries for freedom in numbers never seen before.

Such a call may be heard further than West Papua, which has become an explosive political issue in Melanesia. The ties between Papuans and their Melanesian kin are closer than ever; what happens if citizens of Papua New Guinea, Vanuatu, Fiji, the Solomon Islands and Kanaky rise up and insist that their leaders support West Papua? The overturning of Sato Kilman’s government in Vanuatu is a cautionary tale.

How will the Indonesian state react? They will likely point to the money they have poured into West Papua – the benefits of which have gone mainly to transnational corporations and Papuan elites, while further impoverishing the Indigenous people. They will argue that West Papua is a democracy; that Papuans are elected by their own people. This is true, but the Indonesian government denies the Papuans the right to form their own political party. In reality West Papua is a colonial outpost ruled from Jakarta.

Papuan political prisoners fill the jails, evidence of systemic torture leaks out, and the bodies of Papuans killed by the police and military pile up (like the alleged massacre of 40 Papuans in the remote Puncak Jaya area in recent months).

Finally, the Indonesian government will call the Papuan dissent terrorism or a foreign-led ploy. This kind of propaganda is the last resort of all authoritarian rulers. Official Indonesian military figures say the armed guerillas number little over 1000 full time fighters, most of whom are not active. On the other hand, the nonviolent movement numbers tens of thousands and they are on the streets every week, if not every day. The West Papuan independence movement is a nonviolent civilian based insurrection against continued Indonesian rule.

In the next six months Jakarta’s job will be to enforce the Papuans' obedience while trying to minimize repression. The Papuans' task is to undermine the Indonesian government’s legitimacy and raise the political and economic costs of the occupation. The stakes are high but the potential reward is great: freedom.