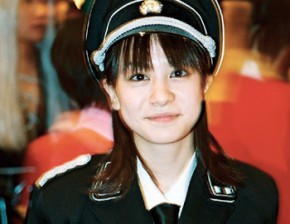 Too late, the government considers adding Holocaust studies to the National Curriculum

A deluge of embarrassing revelations involving the use of Nazi symbols, paraphernalia and salutes is driving Thailand to attempt to rework its national curriculum for primary and secondary students to include Holocaust education.

These revelations include publicity over a Bangkok mall shop selling Nazi uniforms and accessories, a school in Chiang Mai in which parading students wore Nazi SS uniforms, chanted "Sieg Heil" and performed Nazi salutes, the discovery of a now-closed fried chicken shop called Hitler and, only recently, a mural depicting and apparently lionizing the Nazi dictator Adolf Hitler displayed on the campus of one of Thailand's oldest and respected universities, Chulalongkorn University (CU).

Thailand's association with the Nazis isn't new. "It may have happened at a particular university but it could have happened at any institution," said Chetana Nagavaraja, a celebrated Thai academic and German literature professor at Silapakorn University. "Decades ago, a ‘Nazi Bar' was set up along Silom or Sathorn, with waiters dressed up as SS-officers and making that hideous salute. (Onetime premier) MR Kukrit Pramoj lashed out at them in the tabloid Siam Rath with concrete results." The restaurant was shut down not long after.

The problem isn't that Thai students haven't learned the history of the murder of 6 million Jews during World War II in Europe. The problem, critics say, is that they don't learn any history at all, including a history of their own country beyond the record of a long line of Thai kings, ending with the present-day King Bhumibol Adulyadej.

"We were surprised to learn of the minimal attention devoted to teaching WW2 history including the Holocaust in the Thai education system," said Simon Roded, the Israeli Ambassador to Thailand, "Frankly, it is a concern for us. I'm happy to report that several weeks ago, I had a very good meeting with Deputy Prime Minister and the Minister of Education of Thailand, Phongthep Thepkanjana, on this topic. We were told that the Thai curriculum is currently being revised and he agreed to consider including Holocaust education in the Thai curriculum. At the same time, the embassy is working closely with a network of Thai schools on a Holocaust education program. I see these as an important step forward."

The question is, why would otherwise perfectly well rounded youngsters have a liking for Nazi icons and regalia? One explanation is that the swastika is a very old icon and the word itself comes from the Sanskrit word svasti, with positive associations of good fortune and wellbeing.

However, the Buddhist swastika is almost always clockwise, while the swastika adopted by the Nazis was anti-clockwise. In Hinduism, the clockwise swastika is a symbol of the god Vishnu and the sun, while the left-hand (anti-clockwise) swastika represents Kali and magic. Could it therefore be that young Thais are unaware of this major difference and innocently don the Nazi swastika? If it is, then it still doesn't explain the liking of pictures of Hitler and the adorning of SS uniforms.

"I think they just don't know any better. World history and geography instruction are woefully inadequate in Thai schools," Jason Alavi, the principal of The American English Language School in Bangkok, told Al Jazeera. "The vast majority of Thais I have known have very little real, useful knowledge of the details of the rest of the world. It's just not a strong point in the Thai curriculum."

"Youngsters will always dress to ‘shock' or to be different. Call it a rebellious streak or whatever," said Phil Williams, owner of the popular education website in Thailand, ajarn.com, "Look at the punk era with fashion followers wearing safety pins and ripped bin liners."

Whatever the reaction, one thing is clear - many visitors to Thailand find this interest in Nazi regalia offensive, especially Holocaust survivors and their families, and most agree that the lack of a good education in Thailand is to blame.

While history, both domestic and international, may well be covered in some of the subjects above, particularly social studies, it is surprising that, given its importance within a culture, there is not one dedicated subject in history, not even Thai history, in the Thai National Curriculum.

The Bangkok Post this week also published an article entitled "Ignorance, hypocrisy and Chula's Hitler billboard," by Pirongrong Ramasoota, an academic from Chulalongkorn University. He was in no doubt about why these images of Hitler and the Nazis keep recurring in the local and international media. He accepted the official CU position, agreeing the incident was a result of "historical ignorance."

"It may be safe to say that an average Thai is as oblivious about the "killing fields" in neighboring Cambodia as he or she would be to the Holocaust," Pirongrong said.

He also charged the Thai academic community with hypocrisy for not speaking up about the Thai lese majeste laws, under which many innocent foreigners as well as Thais have been imprisoned for daring to criticize the monarchy.

"When the international community criticizes the lese majeste law as draconian and as a threat to free speech, loyalists defend it on the grounds of cultural relativism," Prongrong continued. "Unfortunately, we cannot have it both ways. Respect is a two-way-street. If we want our values to be taken seriously by the international community, Thai society - beginning with the academe - has to set itself straight and strive to be more socially literate about the world and our history."

"I believe what I told Ambassador Simon Roded is that during the present time of curricula reform, we will have our reform team consider the incorporation of this issue into our social studies subject as one of the incidents that had happened during World War II," said Phongthep Thepkanjana, deputy prime minister and until recently the minister of education. "We do agree that the Holocaust is a bad thing for mankind. Our education system therefore will promote and inculcate our students to believe in peace and harmony and respect different opinions in a democratic way." Asia Sentinel