Infrastructure for the new Myanmar - Better run through the jungle 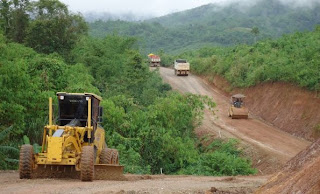 THAILAND is rare in its region for having a shrinking population and nearly full employment—and so the need to look abroad to maintain long-term growth. Its politicians and businessmen have their eye on at least one magnificent-seeming source of wealth, just beyond the country’s borders. Their vision is to build a $50 billion industrial megalopolis and deep-sea port at Dawei in Myanmar, on the shores of the Andaman sea.

It would be the biggest in Asia.

Even as the crow flies, Bangkok and Dawei are a good 350km apart. But then they lie opposite one another across the Tenasserim range—a malarial jungle that is hopping with armed insurgents. There has never been any man-made structure to connect the two sides.
Until very recently. Thailand’s largest construction company, Italian-Thai (Italthai), has just finished cutting a road through the jungle. It took five years; once it’s paved with asphalt, the road will have cost them $1m per kilometre. And yet it is still a dirt road (though that description once seemed so intolerable to Myanmar’s censors that they forced a local newspaper to cut the word “dirt”).

Yingluck Shinawatra, the prime minister of Thailand and sister to Thaksin, a former prime minister, is scheduled to inaugurate the road this month. On a lucky day recently I was given the chance to test the new passage.

The rainy season has begun so an early departure from Bangkok is in order. U Htin Aung, who has offered to take me across the range, is bang on time. Does he mind a 6am start? “No. When we intercepted the opium caravans that were running twice a week, sometimes we did not sleep at all,” he says. Mr Aung is a former brigadier-general of Myanmar’s military intelligence. He now works as a director of special projects at Italthai.

The 175km-drive from Bangkok to the Thai-Myanmar border is rather uneventful. The two-lane highway is in good condition. It follows the Asian Highway 123, which runs from the border with Cambodia in the east, along the coast of the Gulf of Thailand, via the country’s own biggest port and industrial area, Map Ta Phut, to the capital, Bangkok, and then on to the border with Myanmar. It is early and drivers are better behaved than usual in Kanchanaburi province. Land prices there have shot up ten-fold in anticipation of the new royal road for international trade into South-East Asia.

At the border checkpoint in Phu Nam Ron our Thai-built Japanese car, an Isuzu MU-7, ceases to be of any use. Only a vehicle with a Myanmar number plate will do—in our case, a Toyota pick-up truck, a 3.0 D-4D. I am a bit jumpy; the land border is officially closed to the public. Crossing the Tenassarim range in a single afternoon, along the route the Japanese Imperial Army retreated in 1944, is a very new thing.

At the checkpoint on the Thai side of the border, a man wearing a rain cape uses a raised orange umbrella to signal simply that we may pass. Things are more formal on the Myanmar side, where a lot of stamping is involved. But the immigration officers are friendly and the atmosphere relaxed. The movie “American Gigolo” (1980), starring Richard Gere, can be glimpsed playing on a black-and-white television. Two wall clocks serve as a reminder that Myanmar has a time zone of its own. It is 9.30am here—30 minutes ahead of Thailand and the rest of mainland South-East Asia.

From here on everybody must keep to the right side of the road, courtesy an order in 1970. It was General Ne Win who scrapped left-hand driving, reportedly because his astrologer felt that Burma (as it was then called) had moved too far to the left. The rule anyway is of little consequence. Till the town of Myitta, at the confluence of two rivers and mid-way to the sea, dogs and mopeds outnumber cars.

The jungle ahead is mostly untouched. Not so long ago it was the scene of one of the region’s longest-running insurgencies, a war of attrition between the armed wing of the Karen National Union (KNU) and the Myanmar army. Landmines along the road have since been cleared. KNU settlements have been moved back from the roadside, from which we can see the remains of their former sites overgrown.

“We are very friendly with the KNU”, says Mr Aung. He recalls negotiations over security for the road that he and his boss, Premchai Karnasuta, a pal of Mr Thaksin’s, undertook with the KNU leadership in Kanchanaburi and Chiang Mai between 2008 and 2010. According to Mr Aung, one of the insurgents’ demands was that the lorries of Italthai must not give any hitchhiking soldiers a lift along the way.

There is really no question who is boss on this privately owned road, from here to the west. As we climb the first mountain range on the Myanmar side, heavy machinery guarded by bored soldiers comes into view. Mr Aung remarks of the army that “they help us look after our equipment”. Every 30km Italthai has a camp where earthmovers, construction materials and fuel are stored, and where stranded engineers can stay overnight. The company’s fleet of 50-odd Japanese pick-up trucks are in constant radio contact. A fibre-optic cable held aloft by bamboo poles runs along the 150km road, all the way to the Italthai offices, just a short stroll from the beach north of Dawei.

Next we come to the steepest ascent, a ridge known locally as Elephant Shit Hill. The name triggers a lengthy but inconclusive discussion over its derivation, which has something to do with the exertion it demands of a working elephant. The highest point of mountain range still ahead is labelled on maps as the more elegant but perhaps no less uncomfortable “Elephant Cry Hill”. Engineers have decided that both hills, Shit and Cry, need tunnels dug beneath them, so that lorries can plough straight through, once the full flow of international trade has been unleashed.
The terrain soon flattens out and follows the course of the Great Tenasserim river upstream. A local intelligence officer on a two-wheeler informs us that the regional commander of the Myanmar army, the most powerful man in these parts, is just behind us. We wait but he does not show up. Near Myitta a teacher, a policeman and a local female intelligence officer with a bouquet of flowers are waiting for the major-general to arrive; he is to inspect a newly built pagoda. It is one of three that Italthai has built along the road. Unlike the pagoda on the edge of the project site at Dawei, this one has yet to be gilded.

The general remains elusive and the skies open yet again. Suddenly there is an unforeseen opportunity to test the new road, under monsoon conditions. Protests by unhappy villagers are going to necessitate a muddy and pothole-ridden detour. Instead of making a direct line for the coastal site of the port, we turn south, for the town of Dawei.

There we pull into the newly opened Zayar Htet San hotel. Inside its lobby two brick-sized copies of the Myanmar Construction Industry Directory 2013 suggest that other guests, whoever they were, did come for a beach holiday. But in time this may change. Rumour in this sleepy town has it that prominent Thais have already begun snapping up beachside properties, through proxy buyers.
Mr Aung has been involved with the project from the start, and claims he has discussed it with Mr Thaksin over lunch on several occasions. He says it used to take a day to get from Dawei town to the actual project site. Now that there is a road it takes just 45 minutes. We are soon our way. En route we pass Mu Tu, a village whose inhabitants were supposed to relocate by the start of the rainy season. Thein Aye, a 48-year-old mother of six, keeps a small tea-and-noodle shop on the edge of the planned port. The space that has been cleared for it along the shore is big enough to accommodate 25 Panamax-class ships at dock. She says that she is yet to find out when she will have to move. Her new home has already been built, in a relocation area near another plot that has been designated as a future golf course for expats.

The project site is 204 square kilometres—making it ten times as big as Map Ta Phut. The builders’ headquarters is close to the beach. Anan Amarapala, a vice-president of Italthai and an engineer, does not conceal his chagrin at the fact that the company has just recently been demoted. Where it had been a principal, now it will be only a contractor, since Thailand’s and Myanmar’s governments took control of the project. Mr Anan emphasises that the whole thing is in its pre-construction phase. The ground has to be raised by the two metres that will be needed to protect against the anticipated rise in sea levels. They have to make sure they have sufficient energy, water and roads. Ultra-large tankers full of crude from the Middle East are supposed to berth offshore, their cargo pumped to shore to feed petrochemical plants and steel mills.

At times it all sounds a bit like SimCity, a video game in which players are given the task of founding and developing a city. So much is still abstract, and the whole project’s scale seems better suited to imagination than reality. But now there is the road. And 200 flesh-and-blood office workers, technicians and bureaucrats among them, sitting in actual cubicles and plotting the future. Later today a Japanese delegation is due to arrive, by corporate jet, to check it out in person.

Mr Aung says that it is a very challenging project because the “logistics are simply not there”. He believes that it will come together eventually, but that it might take 20 years. He can tell of a major oil company that took a look at the current level of investment and decided to postpone its own commitment. “Tell us when you are ready,” they said. Banyan, for The Economist