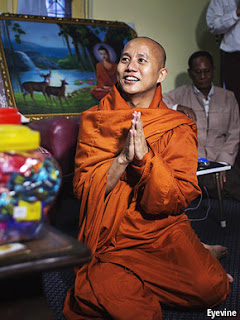 Fuelled by a dangerous brew of faith, ethnicity and politics, a tit-for-tat conflict is escalating between two of Asia’s biggest religions

THE total segregation of Buddhist Arakanese from Muslim Rohingyas is now a fact of life in the western Myanmar port-city of Sittwe. Until June last year both communities lived side by side in the capital of Rakhine state, but following several rounds of frenzied violence, the Buddhist majority emptied the city of its Muslim population. The Rohingya victims now scrape by in squalid refugee camps beyond the city boundaries. The best that most of them can hope for is to escape on an overloaded fishing boat to Malaysia. Many of them die trying.

The animosity between the Rohingya and the local Arakanese in this remote corner of Myanmar is a consequence of colonial and pre-colonial patterns of settlement. It is an old and very local affair, and there were hopes that it would stay that way. Not any more. The assault on the Rohingyas, which cost more than 100 lives and made over 100,000 homeless, sparked a wildfire of sectarian violence across the rest of Myanmar which now seems to be spreading to other parts of Asia, too. A tit-for-tat escalation is going on which, with reason, worries many in the region.

While the actual bloodletting in Myanmar has abated, at least for now, no let-up has taken place in the hateful rhetoric directed against the country’s Muslim minority, which makes up about 5% of the 60m population. Radical monks, led by a notorious chauvinist, Wirathu, from a monastery in the northern city of Mandalay, have abandoned any claims to Buddhism as a universal doctrine of compassion and non-violence. For them Buddhism equates with a narrow nationalism. They argue, quite simply, that unless the majority-Buddhist population fights back, Muslims, with alarmingly high birth rates, will overrun the country. On July 22nd he claimed that a small explosion in a car near where he was preaching was the work of Islamic extremists. It all taps into old resentments against the big influx of Indians, many of them Muslim, who came into the country on the coat-tails of British colonialists during the 19th and early 20th centuries. They ran much of the country’s finance and commerce, and were hated for it by the indigenous Burmans. Race riots against Indians and Muslims in the 1930s in Yangon (then Rangoon, the capital) and elsewhere were whipped up then, as now, by a chauvinist Buddhist press.

The latest initiative of Mr Wirathu and his cohorts, organised into a group calling itself “969”, alluding to three core tenets of Buddhism, is to draft a law seeking to curb interfaith marriages in Myanmar. They propose that Buddhist women must seek permission from local officials to marry a man of another faith; meanwhile, the husband-to-be should convert to Buddhism. Under Myanmar’s former military rule, such ideas had little chance of becoming law, but with the onset of democracy all that has changed. The fear is that minority parties, desperate to avoid being wiped out at the next general election by Aung San Suu Kyi’s all-conquering National League for Democracy (NLD), will take up the monks’ cause for the sake of electoral gain, exploiting—and encouraging—anti-Muslim sentiment. The National Democratic Force, an NLD offshoot, may introduce the draft law in parliament, supported by the ethnic Rakhine party.

Another country where Buddhism is becoming conflated with a growing ethnic and nationalist identity is Sri Lanka. There the Bodu Bala Sena (BBS) organisation—literally, “Buddhist force”—made up of members of the country’s ethnic Sinhalese majority, preaches a doctrine of intolerance against a minority Islamic population (in this case, about 10% of the country), whose birth rate, they also claim, is alarmingly high. Galagoda Aththe Gnanasara, a BBS leader, argues that “This is a Sinhala Buddhist country. We have a Sinhala Buddhist culture. This is not Saudi Arabia. But you must accept the culture and behave in a manner that doesn’t harm it.”

The organisation has been campaigning against Islam on specific issues, such as Halal labelling on food. More generally, it is accused of inciting mobs to attack mosques and Muslim-owned shops. The BBS defends the persecution of the Rohingyas in Myanmar, claiming that Buddhists are acting out of self-preservation. As in Myanmar, plenty of politicians are ready to promote the agenda of groups like the BBS by exploiting the ignorance, prejudices and fears of the Buddhist population.

Already, however, a Muslim backlash is under way. In Mumbai in India Muslims have marched in solidarity with the Rohingyas. Muslims may have been responsible for the bombing on July 7th of one of India’s most revered Buddhist sites, the Bodh Gaya in Bihar, where Gautama Buddha is said to have obtained enlightenment.

As for Indonesia, easily the biggest majority-Muslim country in the region, Muslims have been helping the Rohingyas through donations. Now religious solidarity is taking a more violent turn in a country with a record of Islamist terrorism. In early May two Muslim men were arrested for allegedly planning to attack the Myanmar embassy in Jakarta, the capital, with pipe-bombs. They may have been inspired by an imprisoned radical cleric, Abu Bakar Basyir, who in April called for a jihad against Myanmar’s Buddhist population.

Reports have also surfaced of a meeting in Jakarta on June 19th between one extremist Indonesian group, the Forum Umat Islam, and two representatives of the Rohingya Solidarity Organisation (RSO). One Rohingya leader, Abu Shafiya, said that his people are “weak and unarmed” and so need bombs and training to strike back; he claims to have 300 people under arms. The RSO is one of several shadowy groups from either side of the Bangladeshi border with Myanmar that were active some decades ago. It seems logical that a few desperate Rohingyas might now look for defence to other Islamist groups. Sidney Jones, an expert on Islamist extremism in Jakarta, says that the RSO “would be an organisation around which an armed resistance might coalesce.”

This sort of development is worrying, yet countervailing pressures may prevent this kind of violence from spreading too far. On the Muslim side, argues Ahmad Suaedy of Jakarta’s Abdurrahman Wahid Centre for interfaith dialogue, some jihadist groups, reared on the fundamentalist doctrines of the Arab world, would regard the Rohingyas’ brand of Islam as unduly syncretic, even unIslamic, and thus unworthy of support. On the Buddhist side, meanwhile, many argue that the aggressive chauvinism that now flourishes among the monks in Sri Lanka and Myanmar could not take root, say, in Thailand.

That is despite an insurgency raging in Thailand’s four southernmost provinces, where Muslims are in a majority. The conflict has cost at least 5,000 lives since 2004. In fighting the Muslim insurgents, the Thai army has become inextricably bound up with Buddhist monks. Temples are used as army bases, and “soldier monks” are said to operate. Armed all-Buddhist self-defence groups exist as well. For their part, Muslim insurgents have specifically killed Buddhist monks, despite army protection, as symbols of Thai government authority.

Yet it is remarkable that the armed struggle has aroused no wider Buddhist backlash against the Muslim minority in the rest of the country. Maybe this is because the insurgents target ethnic Chinese and Thais equally in their battle for self-rule; their fight is not with Buddhism itself. Meanwhile, Thailand’s Buddhist structure is more hierarchical. The monarch and the political establishment keep the monks on a tight leash.

Indeed, the first official peace talks began earlier this year between the Thai government and some Muslim groups in the south. The hope is that the conflict in Muslim southern Thailand remains contained. It is not fated to spill over into general sectarian violence. The Economist