US counterbalancing China, not containing 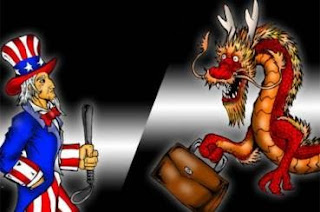 Thus, the US ‘rebalancing’ in Asia; the Trans-Pacific Partnership (TPP); and the US alliances with Japan, the ROK and Australia, are all components of a US effort to maintain US dominance at China’s expense.

This view is wrong. Containment was US policy toward the former Soviet Union during the Cold War. The USSR was a rival ideology, a competing anti-capitalist economic system aimed at expanding the Soviet empire. Indeed, fear of Soviet hegemony was a major factor that led President Nixon and Chairman Mao to open US–China relations in 1971.

Containment was an effort to isolate Moscow economically; undermine its ideology; and contain its military power with a robust US nuclear arsenal, alliances such as NATO to its West and Japan to its East, and an integrated global trade and financial system. Containment meant minimal social or economic interaction with Russians.

The United States also pursued such a policy toward Iraq under Saddam Hussein and toward Iran known as ‘dual containment’. This meant economic sanctions and, in the case of Iraq, a no-fly zone limiting Saddam’s ability to control Iraq outside Baghdad.

This is decidedly not US policy toward China. Eight US Presidents from Nixon to Obama have pursued a policy of facilitating China’s economic modernisation and integration into the international system. The United States has pursued a consistent policy of cooperating with China where interests overlap and seeking to manage differences.

No country has benefited more than China from the security role that the United States has played in East Asia, underpinning stability and economic globalisation over the past four decades. As China launched its reform and opening policies, its economy grew from some US$202 billion in 1980 to roughly US$7 trillion by 2012, as it joined global institutions from the WTO to the IAEA.
The United States became China’s largest trading partner, with bilateral trade in 2012 reaching US$536 billion. US investment has helped fuel China’s astonishing economic growth over the past three decades, and China holds more than $1 trillion in US treasury bonds. Cultural ties have also grown: some 200,000 students — including the daughter of President Xi Jinping — attend US universities.

This reflects an economic relationship of deep interdependence. This is also why the TPP is not a device to contain China but rather a means of furthering economic integration in the Asia Pacific. Though the Obama administration has not explained it well, China could decide to join the TPP if and when it is willing to adopt the agreement’s trade rules. As China’s new leadership pursues a new wave of economic reforms, Beijing will likely find that better protections for its intellectual property rights and other standards serve its interests.

As China has developed its increasingly sophisticated military capabilities, Washington has also pursued a geopolitical posture of hedging against strategic uncertainty. So too has China. This duality of economic integration and strategic competition is the prevalent geopolitical reality in the Asia Pacific. It is why nations from India to Vietnam have increased security cooperation with the United States and, increasingly, with each other. This is counterbalancing, a time-honoured approach to the game of nations, and not to be confused with containment. Long before the US ‘rebalancing’ was proclaimed, the United States has been strengthening alliances and security partnerships in East Asia for over two decades. The current US posture is the accumulation of those efforts.

Counterbalancing means mobilising resources and partners to offset a perceived challenge to the existing strategic balance. The danger is that this can create a dynamic known as a ‘security dilemma’ in international relations theory. One state increasing its military strength because it feels vulnerable may produce an unintended reaction in another state which feels threatened, leading to a spiral of increased tensions and conflict.

This is evident in US–China relations. The US ‘rebalance’ reflects a response to a growing Chinese military power, a concern that a longtime core US interest — maritime access — may be at risk. And as prominent strategic thinker Dr Wu Xinbo of Fudan University has written, ‘China has responded by continuing to develop its “area-denial” and “anti-access” capabilities so as to maintain a reliable deterrent against US forces within the so-called first island chain’. From the US perspective, this may have cause and effect backwards, but it captures the action–reaction dynamic at play.

This Pentagon–PLA mirror-imaging and reflexive competition lies behind the strategic distrust in US–China relations. It is also why Presidents Obama and Xi agreed on the need to create a new type of relationship at the recent US–China Summit in California.

The challenge to the US–China relationship, and more broadly to stability in East Asia, is how to move from strategic distrust to strategic reassurance. The reality is that mutual vulnerabilities, from economic and financial to cyberspace, outer space and climate change, are shared interests. At the end of the day, whether US–China relations become more cooperative or competitive will be a major factor shaping the international order in the 21st century.

Robert A. Manning is a senior fellow of the Brent Scowcroft Center for International Security at the Atlantic Council. He served as a senior counselor from 2001 to 2004 and a member of the US Department of State Policy Planning Staff from 2004 to 2008.
An earlier version of this article appeared in the Global Times