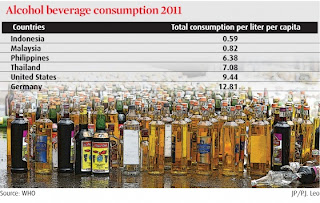 The House of Representatives has agreed to accept a draft bill proposed by the Muslim-based United Development Party (PPP), which calls for stricter regulation of alcoholic beverages, for deliberation by the Legislative Body (Baleg).

The PPP proposal has received a second wind following the decision by the Supreme Court to abolish a 1997 presidential decree which had prevented local administrations from prohibiting the sale of alcoholic beverages.

The court upheld the judicial review filed by hard-line group the Islam Defenders Front (FPI), which is notorious for its violent raids on nightclubs and bars in protest against practices that it deems “sinful”, including the sale and consumption of alcoholic drinks.

With the abolition of the decree, local administrations now have the freedom to ban the sale and distribution of alcoholic drinks within their jurisdiction.

The bill is among the 70 prioritized bills to be deliberated and completed within this year as agreed by lawmakers during last year’s plenary meeting.

The PPP’s draft had proposed a complete ban on all beverages containing any levels of alcohol in the country. Those who produce and distribute alcoholic beverages would face a maximum of 10-years’ and five-years’ imprisonment respectively. Consumers of alcoholic drinks could be sentenced to two years in prison.

PPP lawmaker Ahmad Yani said that the Baleg had watered down some of the party’s proposals, changing a total ban to stricter distribution and consumption. “It now includes stricter rules on production and levels of alcohol, as well as designated areas for consumption,” the senior lawmaker said.

Although the Baleg has yet to finish discussion of the draft, Yani said his faction would keep pushing for the endorsement of the bill this year, arguing that a legal vacuum on the distribution of alcoholic drinks could be exploited by those who could benefit from the situation.

Under the 1997 decree, the distribution and sale of drinks containing more than 5 percent alcohol were legal if they were sold in hotels, bars, clubs and certain areas designated by the central government.

The decree put those alcoholic beverages under supervision while the sale of drinks with an alcohol level below 5 percent, including beer, was freely allowed.

More than 22 regencies and municipalities, including Tangerang in Banten; Bali; and Depok, Indramayu and Bandung in West Java, have issued such bylaws on alcohol control, although not all of them have yet been implemented as the Home Ministry had been reviewing the ordinances as they were deemed to contravene the presidential decree.

The Home Ministry has yet to issue a new regulation, arguing that it is still waiting for an official copy of the Supreme Court’s ruling.

Some of the bylaws, which include a 2010 Bandung bylaw, violate the decree and put all alcoholic beverages under supervision, allowing their sale only in hotels, bars and clubs. The Bandung administration has stuck to its guns despite the Home Ministry’s call for revision.

A 2012 Bali alcohol bylaw adapted the decree, controlling only those drinks with more than 5 percent alcohol and allowing the production of traditional palm wine “arak” under supervision. Arak is also used by Balinese Hindus in religious ceremonies.

The legal vacuum could easily be exploited by firebrand groups, constitutional expert Fajrul Falaakh said. “With the Supreme Court ruling, the FPI and other parties could try for a complete ban. Some religions in our society allow the consumption or use of alcoholic beverages [for rituals],” Fajrul said.

With or without a regulation on alcoholic drinks, what mattered most was law enforcement, he said.

Nasir Jamil, lawmaker of another Muslim-based party, the Prosperous Justice Party (PKS), questioned the motives of PPP although he agreed that the distribution, as well as consumption, of alcohol should be tightened.

“Basically, we agree on imposing tighter limitations on alcoholic beverages, but not a total ban as we still have to study the damage of alcohol on society and the benefits of the industry,” he said. “And why has Baleg yet to finish the draft? [PPP] should not make it a political bargaining chip.”