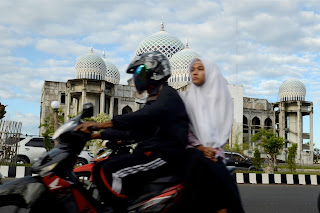 An Acehnese woman (R) rides on the back of a motorcycle in Lhokseumawe city in Aceh, the only province to implement Islamic sharia law in Indonesia April 12, 2013. While an official regulation is yet to be issued, police are already pulling women over and forcing them to sit sideways, with their legs dangling by the rear wheel

Lhokseumawe. As the sun sets over Aceh province on the westernmost tip of Indonesia and the call to prayer blares from mosque speakers, five policemen leap onto the back of a patrol truck, ready to round up lawbreakers.

In khaki uniforms and black boots, the men circling the town of Lhokseumawe are not safeguarding the streets from vandals or thieves. They are sharia police and their job is to ensure no one breaks the Islamic law of the land.

The police swoop in on a young woman, buying food at a sleepy street stall.
Her crime? She is exposing her hair, so she is sent home to fetch her headscarf, as men in T-shirts look on silently, eating cobs of corn.

Rights activists complain that Islamic shariah regulations in Aceh are becoming increasingly sexist and unreasonable, and that the shariah police — who operate independent of the regular police — are picking on women.

But headscarves are the least controversial of issues in Aceh, the only province to implement shariah law in Indonesia, home to the world’s biggest Muslim population.

In Lhokseumawe, the mayor has called on women passengers to sit side-saddle on motorbikes, claiming straddling is sexually suggestive, unfeminine and un-Islamic.

“If a woman straddles, the sensitive parts of her body will push up against the man driving,” Lhokseumawe government secretary Dasni Yuzar told AFP, making hand gestures in front of his chest to signify breasts.

“This is not allowed under Islam and is not in accordance with our local customs,” he said.

A women passenger riding with a female driver too should side-saddle, he said, while women riding with men should never drive.

While an official regulation is yet to be issued, police are already pulling women over and forcing them to sit sideways, with their legs dangling by the rear wheel.

Heri Mutti, one of the shariah policemen, said women who sat “in a feminine way” on motorbikes were more beautiful than others.

“And it’s our job to make sure they stay like that,” he told AFP while on patrol.

Most women are complying, with streams of colourful headscarves atop motorbikes flowing through the streets. While some women are not bothered by the mayor’s call, many say they are being treated like puppets.

“We’re just trying to get on with life, drop our kids at school, go to the shops,” said 36-year-old Fauzia.

“Why should the government care how women sit? It’s annoying,” she said at the helm of a motorbike with her young son in front of her.

Rinawati, an activist from the Indonesian Women’s Commission in Lhokseumawe, said the mayor’s side-saddle call and comments like Yazar’s were examples of how male-dominant governments were hijacking shariah to control women.

“We’re seeing a trend in Aceh where local governments are carrying out acts of injustice against women. Islamic shariah here is not considering the female perspective,” she said.

Women in the district of West Aceh have been banned from wearing tight trousers and jeans, while several in the province have been arrested for prostitution for being out alone at night or with men who are not relatives.

A teenage girl attending an outdoor concert with male friends last year committed suicide after police accused her of prostitution.

Rinawati fears that women could even be banned from dancing after North Aceh district chief Muhammad Thalib said recently that women dancing in public was against Islamic teachings.

His comments have caused confusion in Aceh, which has a world-famous tradition of dance, raising questions about whether a decade of shariah law in the province gels with Aceh’s culture.

Yuzar said the two go hand in hand, adding that regulations such as the straddling ban would take the Acehnese back to its roots, as in the 12th century when Islam first entered the region.

“Many other cultures from both the East and West have come into Aceh. And the young are adopting Western culture in particular to the point they are feeling an identity crisis,” Yuzar said.
Women’s rights activists bemoan suggestions that Aceh should return to the 12th century, but so too does the Aceh government’s shariah council chief, who fears that local governments are going too far with shariah regulations and that Aceh has lost its way.

Aceh was given the power to implement shariah law in 2001 under a special autonomy agreement with Jakarta, aimed at quelling a separatist movement.

How exactly shariah law was included in the deal is shrouded in mystery, with many Acehnese saying they never wanted it and the rebels never requesting it.

Most historians say that the deal was made between an elite few.

“At the time, the feeling was that shariah would bring a standard of ethics to help the province develop and prosper. That is the Islamic way,” shariah council chief Syahrizal Abbas said.

“But shariah in Aceh hasn’t moved with the times,” he said, adding that a movement of Acehnese against shariah was brewing.

“We want Aceh to move forward, and if sharia is implemented fairly, it can help us achieve a better place for all Acehnese, for women as much as men.” Agence France-Presse(AFP Photo/Romeo Gacad)