AusAID scheme goes up in smoke 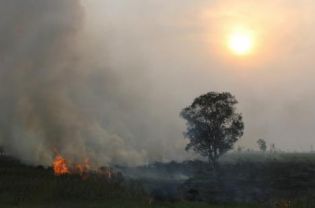 THE ABILITY of AusAID to deliver government programs must be called into question following the revelation that the aid agency has failed in its major program to reforest Kalimantan peat swamp land.

The agency issued no media statement admitting its failure but the ABC reported early this month that the $100 million scheme designed to cut carbon emissions and reduce the periodic smoky fires that plague South-East Asia, had come to an end.

In response to questions from Fairfax Media AusAID initially pointed to its website, where an announcement claimed that the key programs of the project had ended as planned, on June 30.
The Australian Government is spending more than $30 million to rehabilitate the forests of central Kalimantan.

In reality, the key objectives were not delivered at all and the failure raises serious questions about AusAID's capabilities and the value of Indonesian aid projects - projects prime ministers so dearly love to launch on overseas trips, but later ignore as they fail to match their grandiose statements.

After the Boxing Day tsunami hit Aceh in 2004, then prime minister John Howard announced Australia would provide multibillion-dollar aid to Indonesia. More than $2 billion has been delivered.

Part of this was earmarked for climate change programs, with then foreign minister Alexander Downer and then environment minister Malcolm Turnbull, announcing on September 9, 2007, that: ''Greenhouse gas emissions will be cut by around 700 million tonnes over 30 years under a $100 million agreement signed today between the governments of Australia and Indonesia.''
Over four years the partnership aimed to preserve 70,000 hectares of peat land forests in Kalimantan, re-flood 200,000 hectares of dried peat land and plant up to 100 million trees on rehabilitated land.

Last week, AusAID said 2.6 million seedlings raised during the project had been planted and 17 small hand-dug canals had been blocked. No large canals were blocked. Of the $47 million allocated for the project, $38 million had been spent by the end of June this year.

However, Patrick Anderson, from the NGO Forest People's Programme, said a regular visitor to the site, who had just returned from a visit, said up to 80 per cent of the seedlings planted on some sites last year had died.

Mr Anderson said he was not surprised by AusAID's decision to pull out of the project. There wasn't broad support for it and it was failing. A lot of funds had been spent for very little progress.

''I know also at the district government and provincial government level there have been lots of questions about the project,'' he said.

As Indonesian peat swamp fires continue to blanket Singapore and Malaysia, we regrettably still have to endorse Mr Downer's 2007 press statement that deforestation and the burning of Indonesia's vast peat lands is the largest single source of that country's greenhouse gas emissions.

The failure of the project cannot be sheeted home to the Howard administration which initiated it. In June 2008, the now-resurrected Prime Minister Kevin Rudd and the President of Indonesia, Susilo Bambang Yudhoyono, re-endorsed it in a partnership agreement.

Despite support from the highest levels, the bureaucrats running the program have not managed to deliver its key objectives. They have had plenty of warning signs of problems but have dissembled when questioned about progress.

In May 2010 AusAID said work to begin blocking drainage canals to raise the water table and re-wet the peat was expected to commence ''later that year''. But in November 2011, more than four years from the launch of the program, AusAID was still only promising that work on canal blocking would ''soon start''.

In response to questions in April last year, AusAID said more than 50,000 seedlings had been planted and a further 1.4 million would be planted during the year. Trialling of canal blocking methodology was under way and six small canals had been blocked. The latest admission that no major canal has been blocked means that the water table has not been raised, as originally promised.

In response to questions from Greens senator Lee Rhiannon at an estimates committee hearing on June 6, AusAID East Asia first assistant director Rod Brazier sought to re-characterise the project. He said it was a ''pilot'' program aimed at testing some very innovative approaches to climate change mitigation and adaptation.

But there was no suggestion that it was a ''pilot'' in the original Downer-Turnbull media statement. Far from it. They said the project itself would cut greenhouse gas emissions and was Australia's ''largest greenhouse abatement project to flow so far from the Australian government's Global Initiative on Forests and Climate''.

Explaining the current situation, Mr Brazier said that since the original announcement, the international environment, in agreements among countries, had ''changed somewhat'' and the circumstances in Indonesia had ''changed somewhat''. He acknowledged that the project had not met its objective to protect 70,000 hectares of peat forest, re-flood 200,000 hectares of dried peat lands and plant many trees.

But in replies Sir Humphrey Appleby would be proud of, he said they were pleased about some results.

Given AusAID's past performance and answers to questions, one has to be sceptical about its current claims.

The project's failure is most regrettable because it had commendable objectives. The land was degraded as a result of a failed Suharto government mega rice project which aimed to turn swampy peat forest into paddy fields. The drained land proved unsuitable and the dry peat fuelled underground fires. The rehabilitation plan aimed to raise the water table, re-wetting the peat and inhibiting the spread of fire.

In highly degraded areas, re-planting was expected to raise soil moisture levels and humidity and further reduce the fire risk. The local people were also to be shown new farming techniques that did not require the use of fire in peat lands and did not depend on illegal logging.
Hopefully other countries involved in such projects will be more successful than Australia.