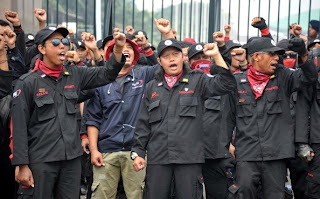 Indonesian workers shout slogans during a protest in front of Parliament building in Jakarta as lawmakers attend the plenary session to pass the mass organization bill. The workers unions vowed to appeal the controversial restriction to Indonesia’s freedom of assembly laws in the Constitutional Court

I worry about Indonesia. I worry that the democratic progress of the past few years is just slip slidin’ away. While Egypt and Turkey’s passionate and public debates on reform reach the front pages of our newspapers, Indonesia appears calm to the world. But, it looks like the government is worried.

Particularly alarming is a new law on Mass Organizations, passed on July 2, 2013.  Suddenly, organizations operating in Indonesia are limited to eight purposes including maintaining the value of religion and belief in God; preserving the norms, values, morals, ethics and culture; and establishing, maintaining and strengthening the unity of the nation.  Foreign organizations are required to obtain a permit from the Ministry of Foreign Affairs and must operate under new rules that include not disrupting the “stability and oneness” of Indonesia.

The law contains vaguely worded restrictions on activity that will leave human rights and other organizations at risk of suspension or shutdown. It leaves little room for political activists to peacefully advocate for referendums, independence, or other political solutions. Areas with peaceful pro-independence movements, such as Papua and Maluku, already find that activism is severely restricted, and this law could be used to further repress dissent.

Maina Kiai, the UN Special Rapporteur on the rights to freedom of peaceful assembly and association states, “this legislative initiative runs contrary to the remarkable progress towards democratization Indonesia has made since the past decade, which has paved the way for a flourishing civil society.”

Amnesty International has recently issued numerous statements and urgent actions raising concern about the crackdown on religious freedom in Indonesia in the last few years. This new law imposes the requirement that the basic principles of any registered organization should not be at odds with Pancasila (Article 2), the official state philosophy that requires the belief “in the One and Only God.”

It seems like particularly bad timing that on the heels of renewed scrutiny of anti-Communist massacres between 1965 and 1966, the bill also bans the spreading of teaching and beliefs that are at odds with the Pancasila such as “Communism/Marxism-Leninism” and “atheism” (Article 59.4).

The National Human Rights Commission has found evidence of rights violations that may amount to crimes against humanity committed by authorities against members of the Indonesian Communist Party. This law will offer no comfort to the victims and families who continue to face discrimination and have waited for over four decades for justice.

This entry was posted in Asia and the Pacific, Censorship and Free Speech and tagged censorship and free speech, communities at risk, Freedom of Assembly, freedom of association, human rights, Indonesia, right to organize, social and cultural rights, Southeast Asia by Leila Chacko