Thailand's Got a Plan 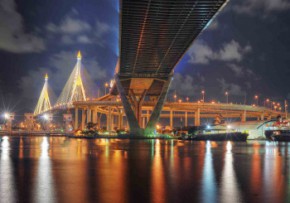 The news that Thailand recorded the fastest growth in the fourth quarter of 2012 since the country began compiling economic data in 1993 is focusing attention on a country suddenly on the move after more than a half decade of political and economic crisis.

The record 18.9 percent gross domestic product fourth quarter year-on-year growth is admittedly coming off a low base from the disastrous floods that inundated the center of the country in late 2011, crippling the extensive foreign-owned assembly industries north of Bangkok. Nonetheless there is a growing feeling that at least for now Thailand has put behind it the internecine infighting that paralyzed the country for more than six years.

It also seems the extensive development plans that former Prime Minister Thaksin Shinawatra was planning before his 2006 ouster in a royalist coup are again underway in the hands of his sister, Prime Minister Yingluck Shinawatra, who is running the country as his proxy while he remains an international fugitive on corruption charges.

Under Thaksin, for instance, the Thai government entered talks with Laos and China about rail links connecting the southern province of Yunnan with Laem Chabang, the container port that serves Bangkok. The coup led to a long series of interim governments that largely ignored those plans in favor of ultimately pointless political battles designed to keep Thaksin at bay.

But with Yingluck's Pheu Thai Party winning a substantial enough victory in 2011 national elections to form a government, Thaksin's master plan reemerged. Then came the floods. Sensibly enough, the first major public works beginning this year are a Baht 350 billion (US$11.7 billion) water resource management scheme designed to mitigate massive flooding. Some Baht 99 billion of that is to be spent this year.

Beyond that, however, the Asian Development Bank is assisting on a series of projects designed to make Thailand the hub of a mainland Southeast Asian regional complex connecting Myanmar, now that the country is emerging from its economic isolation, as well as Laos, Cambodia, Vietnam and other countries throughout the region. It is all part of the drive for Asean "connectivity" ahead of the region becoming an economic community after 2015.

With the ADB's help, a Greater Mekong Subregion Highway Expansion Project will upgrade hundreds of kilometers of two-lane national highways to four-lane divided standard. The project will also assist Thailand's Department of Highways in implementing a Strategic Intercity Motorway Network along three corridors radiating out from Bangkok to a distance of 200-250 km.

This interconnectivity, running rail and road lines out into the subregion, would make Thailand the hub for delivery of fruits, vegetables and a wide range of other natural resources from throughout Southeast Asia, substantially enhancing Bangkok's importance as a regional hub to supplement its role as a center of car and electronics manufacturing. The track gauge is expected to be compatible with China's high-speed rail system, although it will be fast rail rather than high-speed.

As it stands now, according to an analysis by the Hong Kong-based Asianomics financial research firm, the government envisions 55 projects costing Baht 2.27 billion (around 20 percent of 2012 GDP) that are due for completion by 2020, with about 70 percent to be financed with debt. That is estimated to take the public debt to GDP ratio to around 60 percent by 2020.

The current government is pushing for a law in parliament that would commit future governments to complete the scheme. This attempts to get around previous roadblocks that stalled Thaksin's plans after the change of government. Pheu Thai enjoys a majority in the 500-member House of Representatives with 265 seats to the opposition Democrats with 159 and other parties trailing.

The key is whether Pheu Thai has the muscle to push the plans through. Given its current parliamentary majority, it should be able to do so.

But there are wild cards, most importantly Thaksin's plan to return to the country, which seems to be on hold because it would likely bring virulent opposition protests back to the streets. He "advises" Yingluck remotely on his iPhone (she has her own ring tone on the phone) and is in constant touch with Thai political figures from his bolt-hole in Dubai. He has said he understands he may not be able to return any time soon (unless he is willing to go to prison) and is willing to stay abroad for the good of the country.

So far Yingluck has sailed on without serious trouble. Most political observers give her credit for astutely handling the pressures of governing. On the streets, the royalist Yellow Shirt People's Alliance for Democracy and other groups have mounted occasional rallies but they do not present a major threat.

"Among the political, economic and media classes, the awareness of the impending Asean single market is strong," according to the Asianomics report. "Many of them regard the event itself as being overhyped; tariffs have already been reduced over a wide range of products and free trade between the nations is more the norm than the exception.However, in Thailand at any rate, the rallying cry of the AEC [Asean Economic Community] - not to mention the opening of Myanmar - is seen as an opportunity to focus attention and spur government spending on improved infrastructure."

Obviously development of this magnitude in Thailand raises questions, as it would elsewhere in Southeast Asia. Not for nothing did previous governments describe the country's system as "buffet democracy," in which scores of politicians regard any development as a chance to sample graft from the table. With Baht 2.3 trillion in spending on the line, the opportunities for enrichment are liable to be enormously tempting.

Nonetheless, despite the caveat that anything can happen, formidable public policy plans are underway in Bangkok, and if works out, Thaksin and his sister may have found an energetic economic and foreign policy blueprint to put the country at the forefront of Asean. Asia Sentinel