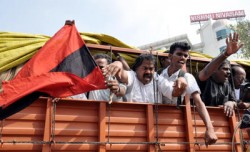 Its location astride the major energy sea lanes of communication of the Indian Ocean and just south of India, however, puts it in a strategic box seat for the forthcoming struggle for influence over the liquid energy requirements of the East Asian economic giants, including China.

Until about a decade ago, the island was a Western-leaning democracy, but one with a generational civil war involving human rights violations on both side. The end of the war in May 2009 saw the death of the head of the Tamil Tigers, Velupillai Prabhakaran. Few who were not Tamil Tiger loyalists would have mourned the passing of the homicidal head of the feared organisation. Fewer still would have regretted the ending of a civil war that had lasted since 1983 and caused an estimated 80,000 deaths.

But the war ended amidst concerns about serious human rights violations involving deaths of civilian Tamils that the Tigers had used as a ‘human shield’ against the final onslaught of the Sri Lankan army. In the final stages, the US and other Western powers had sought a pause in the fighting, threatening to withhold a much-needed IMF loan.

But President Rajapaksa was able to dismiss Washington because of support from China, Iran and Pakistan. China is also involved in developing a massive port at strategically located Hambantota on the southern tip of the island. The ability of the Rajapaksa government to withstand Western blandishments signalled an important game-change in which the West could no longer use its financial clout for human rights objectives.

But the human rights issues won’t go away. British television broadcaster Channel 4, which had levelled the initial charges of a civilian massacre, recently published footage that seemed to suggest that the Sri Lankan army had executed Brabharakaran’s twelve-year-old son. The Financial Times also reports that at least 39 media workers have been killed or disappeared over the last seven years, and Reporters without Borders places Sri Lanka 163 of 179 countries assessed in terms of press freedom.

After the war, the head of the armed forces, General Sarath Fonseka, split from Rajapaksa and fought him in presidential elections. He lost heavily to the popular president, who was riding a wave of economic and military success and who had assumed many of the levers of democratic power. Fonseka was subsequently jailed but has now been released.

Recently Sri Lanka’s Chief Justice was also removed on alleged grounds of impropriety. She had challenged an important law designed to increase the hold of the central government over the provinces and seemingly entrench military rule of the Tamil areas. The new Chief Justice, former Attorney General Mohan Peiris, is being boycotted by the Bar Association.

More seriously for the long-term, the government has shunned any peace and reconciliation process or any move toward autonomy for the Tamil minority, arguing that the best way forward is to reintegrate the Tamil majority areas into the island’s general pattern of strong growth and development.

President Rajapaksa is meanwhile forging ahead to turn Sri Lanka into an ‘Asian tiger’— a model that is not only being emulated on the economic front but also on the democratic, given the emerging authoritarian overtones. After a sharp fall during the global financial crisis, economic growth, which had typically been around 6 per cent throughout the 2000s, rose to about 8 per cent over 2010–11, but has since fallen to 4.8 per cent in the third quarter of 2012.

Sri Lanka’s human rights issues and its forthright approach to the Tamils have triggered a range of reactions.

India is struggling to contain China’s growing influence in the Indian Ocean region and New Delhi’s tendency would be to go soft on human rights. But it is also facing a national election, and the plight of the Tamils has triggered a political response in Tamil Nadu.

The West, while its media might continue to seek to expose abuses, can do little for reasons stated above. Australia’s dilemma is acute. Already in receipt of Tamil boat people fleeing alleged persecution, the last thing Canberra would want is another guerrilla campaign, which would see rising human rights abuses and larger numbers of asylum seekers. On the other hand, Australia needs the Sri Lankan government’s assistance to ensure that boats do not leave the Island.

So here we have it: the old Asian dilemma. How is growth and stability to be set against human rights and fully functioning democratic institutions? How should an ever-weakening West (at least in comparative terms) intervene in what has become the new great game in global politics — one in which it is no longer the central player?

Sri Lanka encapsulates all these issues and provides a fascinating glimpse into an otherwise opaque future.

Sandy Gordon is a visiting fellow at the College of Asia and the Pacific, Australian National University.