Abe and constitutional revision: round two 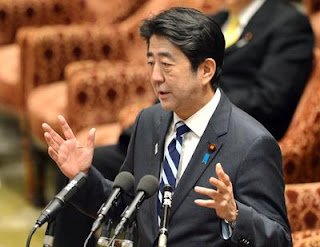 While Japan watchers will immediately assume that this means the potential eradication of the so-called ‘pacifist clause’, it is better understood as Abe’s attempt to reposition pacifism in Japan’s postwar national identity.

During his first stint in office in 2006–7, Abe passed the National Referendum Law. This set in place an essential stepping-stone for eventual revision of the Constitution. Under Article 96 of the Constitution, revision can only take place after a two-thirds majority vote in both houses of the Diet followed by a national referendum to endorse the change. The Constitution left it up to the Diet to determine the referendum requirements, and Abe’s National Referendum Law ensured that only a bare majority was required at the referendum stage. Round one to Abe.

As the LDP’s latest draft constitution reveals, Abe is now proposing to revise Article 96 and lower the bar to constitutional change once more. The LDP wants to enable a bare majority to suffice in constitutional revision votes taken in both houses of the Diet. This would make the Constitution considerably easier to revise.

The proposal reflects the frustration felt by successive Japanese prime ministers, who when faced with hostile majorities in the upper house have been unable to pass legislation on an array of pressing issues. Japanese politics will be in a state of transition for years to come as the Democratic Party of Japan’s rise and fall and the emergence of new political forces reverberates through the political landscape. With the good old days of one-party dominance unlikely to return, Abe needs to fiddle with the institutions and processes governing constitutional revision if he is to see it occur in his political lifetime.

Pundits may point to the LDP’s recent spectacular success in the December 2012 lower house elections as proof that Abe’s prospects for dominance in parliament are good. Together with their coalition partner Komeito and the Japan Restoration Party, the LDP can rely on a two-thirds majority in the lower house. But as Abe himself has admitted, the LDP’s electoral success reflected voters’ disillusionment with the DPJ rather than an endorsement of the LDP. In the proportional representation segment of the vote, where ballots are cast for parties rather than individual candidates, the LDP scored a miserly 28 per cent of the vote. And when it comes to constitutional revision, the LDP cannot count on the endorsement of its coalition partner, the Komeito, either.

With half upper house elections scheduled for July, Abe will have to cut through to the electorate in order to shore up the LDP’s gains. Abe will have to avoid alienating voters with radical plans or ‘old politics’ venality in the form of blatant pork barrel initiatives, and at the same time, make some headway in the realm of economic recovery.

Abe’s desire to press on with constitutional revision before the July poll suggests that he feels his chances of securing a two-thirds majority in the upper house are, at best, uncertain. Indeed, his push towards constitutional revision early in his term conveys pessimism about that poll, but it can also be explained as an expression of his characteristic impatience to implement his policy agenda. This is the kind of thing that contributed to Abe’s undoing last time.

Abe’s systematic approach to facilitating revision of the Constitution is driven by personal conviction: for him, postwar Japan needs to embrace patriotism without qualification. This is the thread that runs right through the 2012 LDP draft constitution, from the proposed provisions to declare the emperor as head of state, to the legal recognition of the rising sun flag and kimigayo anthem, and the designation of Japan’s self defence forces as a national defence force.

The proposed changes to Article 9, including deleting the second paragraph altogether, would see pacifism retain its normative pre-eminence in Japan’s national identity, without imposing constraints on Japan’s ability to engage in self-defence, including collective self-defence.

It is here that we find the underlying compulsion driving Abe’s dogged pursuit of constitutional revision. For Abe, national security represents a norm that is of equal status to that of pacifism. When Abe rails at the fact that the current constitution is the product of a foreign hand and crafted under enemy occupation, he is situating this security norm squarely within the realm of identity politics.

But given Abe’s concurrent propensity to resist embracing apology diplomacy for Japan’s deeds in WWII, he may well prove to be his own worst enemy as he embarks on Round Two of preparing for constitutional revision. In order to refashion Japan’s future, Abe must integrate the past in his national identity project if he is to lend legitimacy and integrity to a ‘more normal’ Japan.
Rikki Kersten is Professor of Modern Japanese Political History in the School of International, Political and Strategic Studies in the College of Asia and the Pacific, ANU.