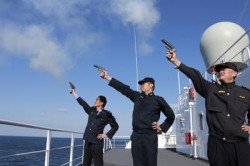 The recent activation of Chinese weapons radars aimed at Japanese military platforms around the Senkaku/Diaoyu Islands is the latest in a series of incidents in which China has asserted its power and authority at the expense of its neighbours.
The radars cue supersonic missile systems and give those on the receiving end only a split second to respond. With Japanese law empowering local military commanders with increased discretion to respond (thanks to North Korea’s earlier provocations), such incidents could easily escalate. In an era of well-established UN-related adjudication bodies like the International Court of Justice (ICJ), how has it come to this? These incidents disconcertingly echo past events.
In the early years of the 20th century, most pundits considered a major war between the great powers a remote possibility. Several incidents prior to 1914 were handled locally or successfully defused by diplomats from countries with alliances that appeared to guarantee the peace. After all, never before had the world been so interconnected — thanks to advanced communications technology and burgeoning trade. But alliance ties and perceived national interests meant that once a major war was triggered there was little hope of avoiding the conflict. Germany’s dissatisfaction with the constraints under which it operated arguably was a principal cause of war in 1914. Similarly, Japan’s dissatisfaction helped trigger massive conflict a generation later.
A century on, many of the same observations can be made in East Asia. China’s rise is coupled with a disturbing surge in jingoism across East and Southeast Asia. China resents the territorial resolution of World War II, in which the United States handed responsibility for the Senkaku/Diaoyu islands to Japan while large chunks of the South China Sea were claimed and occupied by countries that emerged in Southeast Asia’s post-colonial order. Oil and gas reserves are attractive reasons for China to assert itself, but challenging the US place in East Asian waters is the main objective. China resents American ‘re-balancing ‘as an attempt at ‘containment’, even though US dependence on Chinese trade and finance makes that notion implausible. China is pushing the boundaries of the accepted post-Second World War order championed by the United States and embodied by the UN.
China’s rapid rise and long-held grievances mean its powerbrokers are reluctant to use institutions like the ICJ. But China’s assertiveness is driving regional states closer into the arms of the United States. Intimidation and assertive maritime acts have been carried out, ostensibly by elements not linked to China’s armed forces. China’s white-painted Chinese Maritime Services and Fisheries Law Enforcement Command vessels operating in the South China Sea and around the Senkaku/Diaoyu islands have evoked strong reactions.
But Japan’s recent allegation that China used active radars is a significant escalation. Assuming it happened, this latest move could trigger a stronger reaction from Japan. China looks increasingly as if it is not prepared to abide by UN-related conventions. International law has been established mostly by powers China sees as having exploited it during its ‘century of humiliation’. Yet arguably, it is in the defence of these international institutions that the peaceful rise of China is most likely to be assured. China’s refusal to submit to such mechanisms as the ICJ increases the prospect of conflict.
For the moment, Japan’s conservative prime minister will need to exercise great skill and restraint in managing domestic fear and resentment over China’s assertiveness and the military’s hair-trigger defence powers. A near-term escalation cannot be ruled out. After all, Japan recognises that China is not yet ready to inflict a major military defeat on Japan without resorting to nuclear weapons and without triggering a damaging response from the United States. And Japan does not want to enter into such a conflict without strong US support, at least akin to the discreet support given to Britain in the Falklands War in 1982. Consequently, Japan may see an escalation sooner rather than later as being in its interests, particularly if China appears the aggressor.
China’s domestic environment has nurtured jingoism. The Chinese state has built up the public’s appetite for vengeance against Japan by manipulating films and history textbooks. On the other hand, Chinese authorities recognise that the peaceful rise advocated by Deng Xiaoping is not yet complete (militarily at least). In the meantime it is prudent to exercise some restraint to avoid an overwhelming and catastrophic response. If the 1914–18 war taught us anything, it is that the outcome of wars is rarely as proponents conceived at the outset.
Dr John Blaxland is Senior Fellow at the Strategic and Defence Studies Centre, the Australian National University.
Rikki Kersten is Professor of modern Japanese political history in the School of International, Political and Strategic Studies at the College of Asia and the Pacific, the Australian National University.
This article was originally published here by the ANU College of Asia and the Pacific.