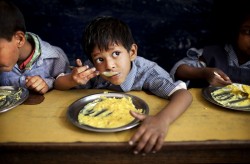 According to new estimates from the Food and Agriculture Organization (FAO) of the United Nations, nearly 870 million people suffer from hunger today.

More than 50 countries, many of them in South Asia and Africa south of the Sahara, have levels of hunger that are ‘extremely alarming’, ‘alarming’, or ‘serious’ according to the International Food Policy Research Institute (IFPRI) 2012 Global Hunger Index. Furthermore, according to the World Health Organization, more than two billion people suffer from micronutrient deficiencies. A significant number of them live in Asia.

Food and nutrition insecurity not only continues to exist at unacceptable levels in many regions but is further threatened by emerging factors and challenges like food price volatility, population growth and urbanisation, natural resource scarcity and climate change. In order to achieve global food and nutrition security an integrated and more innovative development agenda must be adopted in terms of strategies, investments, technologies, institutions and partnerships.

Global demand for food is expected to rise by 60 per cent by 2050 as a result of a growing and more prosperous population, according to the FAO. Meeting this demand using conventional methods of agricultural production will put increased stress on our ecosystem, especially on water and land resources, while also contributing to climate change. As a whole, an integrated approach that recognises the inextricable linkages between water, land, energy and food production will be critical in meeting the growing demand for food while reducing the trade-offs between short- and long-term goals. The poor have limited access to these resources and an integrated systems approach should highlight the trade-offs and help to ensure that benefits in one realm do not come at the expense of another. For example, according to a recent study by Roderick Rejesus and others in the Philippines, a rice production technique called alternate wetting and drying — applying water days after the disappearance of ponded water, as opposed to continuous flooding to prevent the pond water disappearing — was found to economise on the use of scarce irrigation water without significantly reducing yields and profits.

But, to apply an integrated framework effectively, several important knowledge gaps need to be filled. For example, to properly design and implement policy, measurement tools are needed to evaluate the impact of water-related projects (such as expansion of irrigated areas or hydropower development) on ecosystems, climate change, and food security. National governments, the private sector and civil society should be actively engaged in this process and must lead to actions that increase overall resource use efficiency while reducing the trade-offs.

Agricultural development should also be leveraged to improve nutrition and health outcomes, and not focused only on increasing production. Agricultural growth strategies and investment policies need to be designed with a nutritional lens, identifying the likely trade-offs between implementing pro-nutrition growth strategies, poverty reduction and targeted nutrition programs. Innovations like nutrition-focused value-chain approaches and biofortified crops are examples that improve consumer nutrition while creating economic opportunity for farmers.

Recent studies have also shown that within the agricultural sector individual subsectors like staple crops or livestock have different impacts on nutrition outcomes. An IFPRI study conducted in Ethiopia showed that the contribution of growth in staple crops to poverty reduction and calorie intake is greater than the contribution of any other agricultural or nonagricultural sector modelled in the study. Another example is the partnership between PepsiCo, UN World Food Programme (WFP) and USAID to significantly increase nutritious chickpea production by many Ethiopian smallholders. This combines multiple development goals, such as sustainably improving smallholders’ income and increasing the availability of nutritious food for consumers, including women and children. Factors like increased access to land and equality between the sexes in many developing countries (especially South Asia) have also contributed to improved health and nutrition outcomes for women and children. Agricultural development policies in developing countries should, therefore, aim beyond increasing smallholder productivity to include these factors that contribute to improved nutrition.

Given the right incentives, the private sector can also provide effective and sustainable investment and innovation to help in the fight against hunger, malnutrition and poverty. Novel business solutions targeted to poor consumers include nutritionally fortified and affordable foods customised to poor people’s preferences, expanded retail distribution networks, and improved consumer knowledge and trust. For poor smallholder producers, solutions include innovative agricultural inputs targeted to their needs, improved market information, increased access to financial services and expanded rural infrastructure. The role for governments here is to provide an enabling environment for the private sector to operate while also putting in place monitoring and evaluation systems to ensure that operations are socially and environmentally responsible.
Food and nutrition security should also remain at the top of the agenda for future G8 and G20 meetings and previous commitments must be met. Last year, among many other commitments, G20 countries worked together to reduce global food price spikes and volatility by supporting systems that enhance agricultural market transparency. But the G20 must implement additional commitments, such as setting up the Agricultural Price Risk Management tool and other risk-coping tools and country capacity-building programs. In 2012, G20 countries have been committed to improving agricultural productivity, something very much needed after many years of stagnation. Clear milestones and accountability mechanisms should be set to ensure that commitments are met and have the intended contributions.

Organisations within the UN that deal directly with food and nutrition security issues, including the FAO, the International Fund for Agricultural Development (IFAD) and the WFP, should also be reformed and further strengthened to effectively deal with emerging challenges in a timely manner.

Emerging countries such as Brazil, China, India and Indonesia, which have experienced rapid growth and increased integration into the global economy in recent years, have also significant potential to contribute to global food security. Firstly, given the large share of the world’s undernourished living in India, and to some extent China, policies and initiatives to combat hunger and increase global food security are especially pertinent within these emerging countries.

Secondly, emerging countries increasingly affect growth and development prospects in other developing (but less-developed) countries directly through aid, trade and foreign direct investment, and indirectly through commodity prices and competition in third markets. These countries need to prioritise their public spending on agricultural research and development, improve access to input and output markets for smallholder farmers, and scale up productive social safety nets to protect the poor from risk and vulnerability. Linkages between emerging and other developing countries should also be designed to enhance the long-term, pro-poor benefits of trade, investment, technological cooperation and mutual learning for both sides.

Australia has also been a major player in combating global food insecurity. Institutions such as the Australian Government Overseas Aid Program (AusAID) and the Australian Centre for International Agricultural Research (ACIAR) have been influential in pushing the agricultural development agenda. So to have individuals like Sir John Crawford, who served as an architect of the Consultative Group on International Agricultural Research (CGIAR) — a global agriculture research partnership — and as the first-ever board chairman of IFPRI, one of the 15 CGIAR research centres. It is thus important for Australia to continue to invest in the future of global food and nutrition security.

Dr Shenggen Fan is Director General of the International Food Policy Research Institute (IFPRI).
This article appeared in the most recent edition of the East Asia Forum Quarterly, ‘Energy, Resources and Food’.