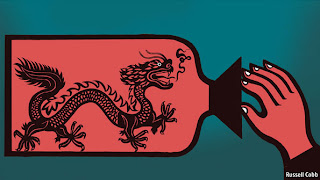 In 2011, in order to rein in a housing bubble and inflation, the People’s Bank of China (PBOC) raised the reserve requirement five times and benchmark interest rates on deposits and loans twice.
While this vigorous liquidity tightening eventually mitigated inflationary pressure, it put the brakes on economic growth. In the last quarter of 2011, the growth rate fell to 8.9 per cent, and in the last month of 2011, growth rates of total investment, real estate investment and manufacturing investment fell precipitately. So despite the fact that China’s GDP growth rate for 2011 was still as high as 9.2 per cent, investment banks and economic pundits suddenly became concerned about a hard landing for the Chinese economy in 2012.
Indeed, the performance of the Chinese economy in 2012 was a little disappointing. Lower than expected growth, particularly in the second quarter of 2012, can be attributed to shifting government priorities. In order to achieve sustainable development and concentrate on restructuring the economy, the government initially refrained from ushering in new expansionary policies to speed up growth. Yet it was increasingly unnerved. In May 2012, the National Development and Reform Commission approved new projects worth a total of 7 trillion yuan (US$1.12 trillion), and in June and July the PBOC cut benchmark interest rates twice in a row. These expansionary moves marked a change in government mood and guaranteed the bottoming out of the economy in the third quarter of 2012.
Even since the global financial crisis, the Chinese economy has followed the familiar cyclical pattern of the past two decades: high investment supported by expansionary policy drives growth; inflation follows after lag; policy is tightened; growth drops away, but inflation is still high; more tightening; inflation falls at last, but growth falls away more than desired at the same time; policy is shifted from tight to expansionary; again, led by investment, growth rebounds. And a new economic cycle starts — Groundhog Day for Chinese growth.
So the rebound of the Chinese economy in the third and fourth quarter of 2012 came as no surprise. As long as the Chinese government still has space to adopt expansionary monetary and fiscal policy, the rebound of the Chinese economy is just a matter of time.
There is no reason to doubt that in 2013 the Chinese economy will continue the trend of growth that began in the third quarter of 2012. China has not exhausted its ammunition yet.
But there are many points of vulnerability in the economy that warrant attention. One particularly worrying issue is the rapid development of the so-called shadow banking system. The total assets managed by the shadow banking system have risen exponentially since 2009 — in 2012, according to market sources, they amounted to more than 14 trillion RMB and accounted for a third of GDP. The high returns of asset pools extended through the shadow banking system are based on the profitability of the private enterprises. However, in 2012 the profit margins of enterprises were low and increasingly precarious. The extremely high money supply (M2)-to-GDP ratio of 180 per cent further complicates China’s financial fragility. The possibility of a collapse of the shadow banking system and the seriousness of the effects of such a collapse on the wider financial system would be much more serious than that of the underground credit networks and local government finance platforms that caused so much concern in 2012.
Another potential threat to China’s economic stability in 2013 is the rapidly increasing level of corporate and company debt. According to a number of sources, while China’s public debt-to-GDP ratio is still low and its household debt-to-GDP ratio may be too low, China’s enterprise debt-to-GDP ratio has surpassed 120 per cent, which is much higher than the corresponding figure in any major developed country. An enterprise debt crisis could easily derail China’s growth.
Lastly, following the rebound of growth, inflation and the resurgence of real estate prices are likely to return to the focus of public concern. How to maintain a low inflation rate and stabilise house prices pose the real challenges for Chinese governments.
Barring unexpectedly large shocks, the Chinese economy will probably grow at a rate higher than 8 per cent this year. But growth is likely to be achieved at the expense of structural adjustment and the discovery of a new, more sustainable growth pattern. The real challenge for the Chinese government will come after 2013.
Yu Yongding is a former President of the Chinese Society of World Economy and was Director-General of the Institute of World Economics and Politics at the Chinese Academy of Social Sciences.
This is part of a special feature: 2012 in review and the year ahead.