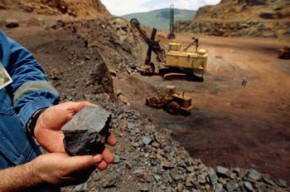 India, always quick to blame multinationals and rich countries for its woes, in recent months has been giving away billions of dollars to Australia and Brazil.

The US$10 billion hole in India's exports represents some 20 percent of the remittances earned by millions of Indians toiling in low and middle income jobs in foreign countries and is seriously exacerbating the current account deficit, now approaching a worrisome 5 percent of GDP, the magnitude of which will impede economic growth.

The issue is the collapse of Indian iron ore exports from more than 100 million tonnes two years ago to probably about 17 million in the current fiscal year and almost nil in the last quarter of 2012. It is this drying up of Indian supply - not any huge rebound in Chinese demand which is usually said to be the prime price mover - that has driven the ore price close to the records level of US$170 a tonne seen in 2011.

From that peak, the price had collapsed to under US$100 and many believed it would go lower as new mines with cash costs of US$30 a ton are coming on stream in Australia and elsewhere. Even at US$100 the price is eight times the level of a decade ago and double what it was in 2008.

The lack of Indian supply has thus been a double bonus for other suppliers by creating additional demand while at the same time driving up the price by 50 percent.

The explanation lies in the collapse of production in the two major iron ore mining states, Orissa and Karnataka. In Orissa production has fallen from 79 million tonnes in 2009-10 to about 45 million in the current fiscal year, and in Karnataka from 43 million tonnes to a mere 9 million.

The main reasons are bans imposed by state government - usually claiming that the mines were being illegally operated - which generally means being held to ransom by corrupt politicians and bureaucrats using environmental issues as a cover or claiming to be protecting the interests of local communities.

A second factor has been a 30 percent export tax that New Delhi collects to profit from high prices and reflects the resource nationalism argument that local resources should be kept for local use. But in the context of an overall supply shortage it simply hands India's steel producers with a price advantage while yielding almost nothing in revenue because exports have collapsed.

As the importer of half the iron ore traded in the world, China is the main direct sufferer from the higher prices created by India's actions. But the Chinese are also laughing up their sleeve, deriding Indian incompetence and recognizing that the economic gap between the two will continue to widen until India's governance becomes much more competent, much less corrupt and much less prone to self-defeating outbursts of 1960s-style economic nationalism. Asia Sentinel