Refusing to see the obvious in Afghanistan 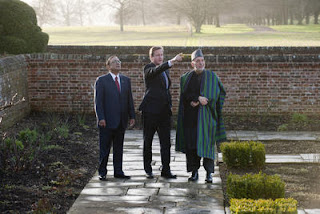 The summit was also attended by the two nations’ foreign ministers, top military leaders and intelligence chiefs, and seems to have been successful in a number of areas. The two heads of state vowed to work toward a peace deal for Afghanistan within six months, reaffirmed their aim to conclude a strategic partnership, backed the opening of an Afghan office in Doha to conduct direct negotiations with the Taliban and reaffirmed their hopes of signing an agreement to strengthen ties on economic and security issues later this year.

The sudden abundance of apparent goodwill in the Afghan–Pakistani relationship stems from the fear that dramatic instability — and even civil war — could result when foreign troops leave Afghanistan in 2014. Chaos would devastate Afghanistan of course, but it would damage Pakistan too.

Yet behind this apparent convergence of interests lie deeper contradictions that will colour any Afghan–Pakistani settlement. Pakistan supported the Afghan Taliban for almost two decades, but now fears that Afghanistan may become a sanctuary for terrorist groups that target the Pakistani state. Islamabad already suspects Kabul of supporting, at least passively, anti-Pakistan groups as a way to compensate for its conventional military inferiority vis-à-vis Pakistan.

This fear of terrorism seems to have temporarily superseded traditional Pakistani anxieties about issues such as India’s influence in Afghanistan or the resurgence of Pashtun irredentist claims. But these issues will continue to worry Pakistan. It is particularly concerned about Pashtun separatism, which finds expression in traditional secular forms but is also articulated around Islamist principles. The Taliban on both sides of the Afghan–Pakistani border is supportive of Pashtun tribesmen, and the so-called Durand Line — the putative border between Pakistan and Afghanistan — remains unrecognised by Afghanistan.

Kabul has insecurities of its own, too. In the short term, any peace deal will have to involve the Afghan Taliban, which refuses to negotiate with an Afghan government that it views as a puppet of the United States. The Pakistani government has not yet demonstrated its capacity or willingness to bring the Taliban to the bargaining table.

This, in turn, feeds President Karzai’s suspicions that Pakistan is deliberately preventing the Taliban from entering into negotiations with his government. The recent release of Afghan Taliban prisoners by Pakistan, supposedly to facilitate the dialogue between the group and the government in Kabul, has done little to assuage these fears. Some of the released prisoners are even suspected to be back in battle in Afghanistan.

These mutual suspicions do not augur well for a strategic partnership. By definition, such a partnership should be based on a convergence of strategic interests, but even the most charitable view of the Afghan–Pakistani relationship sees only very limited shared goals. The two countries’ shared economic interests have so far proven insufficient to allow them to overcome their deep-seated mistrust of one another.

It is a mistake to believe — as many in Washington and London seem to — that a peace agreement in Afghanistan will be the product of a bilateral settlement between the Afghan and Pakistani governments. The consolidation of the Afghan state and the strengthening of its sovereignty should come first. No sustainable improvement of relations between Afghanistan and Pakistan is likely without a stronger Afghan state. With the Afghan presidential election on the horizon in 2014, the objective of any third party, mediator or facilitator should be the creation of a provisional unity government that represents all of the country’s major stakeholders.

Reconciliation within Afghanistan will create new opportunities for Afghan–Pakistani partnerships.
A stronger Afghan state is the best guarantee against any predominant foreign influence in the country, and would deprive regional actors of the ability to use Afghanistan as a battlefield in a proxy war. It would also enable some Afghan–Pakistani cooperation in security matters, without which any economic cooperation will inevitably remain limited.

Time is running short, and the London summit probably reflects nothing more than a Western desire to find an honourable way out of Afghanistan. Not much can be expected from a process that tries to broker a peace deal between an isolated lame-duck government in Kabul and an absentee insurgent group supported by a third party with a history of sabotaging all attempts at reconciliation.

Any lasting settlement will have to include regional actors like Pakistan. But the more urgent task is for Afghans themselves to undertake a meaningful dialogue before the election. Such a dialogue would give a sense of the actual strength of each of the country’s political actors, foster coalition building and most importantly help identify minimum common political platforms. As modest as this seems, it would constitute a first and crucial step toward real stability in Afghanistan.

Frederic Grare is senior associate and director of the South Asia Program at the Carnegie Endowment for International Peace.